Does functional outcome mandate fusion in spondylolisthesis management? A retrospective analysis of 76 cases with one year follow-up

Materials and Methods: This is a retrospective study involving 76 patients who underwent a transforaminal lumbar interbody fusion with a minimum follow-up of one year. Parameters assessed were preoperative pain score with VAS, functional ability with ODI, radiological outcome with reduction of slip grade, slip angle, and lumbar lordosis improvement. MacNab’s criteria for functional outcome and Lee’s criteria for fusion were utilized. Statistical analysis was performed with students’ paired t-test and Pearsons’ correlation analysis.

Results: Improvement in VAS and ODI was noted as 8.2 to 2.1 and 72 to 14 respectively. Slip angle improved from 240 to 6o and 78% of the patients showed radiological fusion and 89% showed good clinical outcomes at 1-year follow-up. Correlation analysis showed no significant correlation between the pain scores and radiological fusion parameters analyzed (r=0.142, p=0.361). However, a significant correlation was noted between the fusion group and functional outcome parameters like the ODI score (r=0.34, p<0.001) and MacNab’s criteria (r=0.46, p<0.001).

Posterior lumbar interbody fusion (PLIF) was done previously for achieving spinal fusion.3 This has been replaced now by Transforaminal lumbar interbody fusion (TLIF) developed by Harms.4 TLIF employs a posterior approach to fuse the anterior column of the spine and helps in disc resection, neural decompression, and circumferential arthrodesis in the lumbar spine.5 Though TLIF has been considered a safe technique with fewer complications compared to PLIF, considering fusion as a necessary pre-requisite for achieving optimal functional outcome remains a question of debate.6

This study aims at assessing the correlation between the functional outcome of the TLIF procedure with the fusion status of the patient through clinical and radiological evaluation of the patients between the preoperative and postoperative periods.

Data like VAS and ODI score measured before surgery along with their neurological outcomes were noted. Radiological data which includes anteroposterior and lateral flexion-extension view were utilized. MRI was used to measure the lumbar lordosis, slip angle and the grading of slip angle for all the patients included in the study.

The patient is positioned prone and through traditional midline approach appropriate lumbar spine was exposed. Pedicle screw stabilization was done under fluoroscopic guidance in the involved levels. Laminectomy was performed in patients with significant canal stenosis and on the side of the radiculopathy unilateral facetectomy was done. The disc space was made ready and a bean cage packed with autograft was placed. Lumbar lordosis was re-formed with the help of contoured rods. No attempt to reduce the spine manually was undertaken. Patients were mobilized after 48 hours with restricted bending and were instructed to restrict lifting weight post-operatively for 3 months.

We included only patients who completed one year of follow-up. The mean age of the population included for analysis was 53.4 years (SD=9.3). The M: F ratio was 45:31 with male predominance noted in the included population. Of the 76 patients included, 12 had an isthmic type and the rest all had a degenerative type of spondylolisthesis. Grade 3 spondylolisthesis was noted in 12 of the included patients while the rest all had Grade 2 spondylolisthesis. The mean surgical time was 90 minutes with mean blood loss being 350ml. L4/L5 remained the predominant level being operated. All the patients had a mean length of hospital stay of eight days.

The preoperative mean visual analog scale score for back pain was around 8.2 which was reduced to 2.1 at final follow-up which was a clinically significant improvement. A similar reduction was also noted in the VAS score for leg pain from 8 to 2.2 during final follow-up.

At the final follow-up, the preoperative ODI score of 72 was also reduced to 14 which showed clinical significance. The average slip angle was reduced from 24o to 6o. Although no attempt to reduce the slip grade was undertaken intraoperatively, a minimum one-grade improvement was noted in all the included patients. The mean cage size used in the cases was 10mm.

Of the 76 patients, 12 patients presented with neurological deficit. Sensory weakness was found in 8 patients and motor weakness was noted in 4 patients. All of them had improvement in their sensorimotor neurological status except 2 patients who remained the same as of preoperative status. 4 patients had a superficial infection which settled with appropriate antibiotics.

Correlation analysis between the pain scores and radiological fusion parameters analyzed (r=0.142, p=0.361) showed no significance. However, a significant correlation was noted between the fusion group and functional outcome parameters like the ODI score (r=0.34, p<0.001) and MacNab’s criteria (r=0.46, p<0.001). 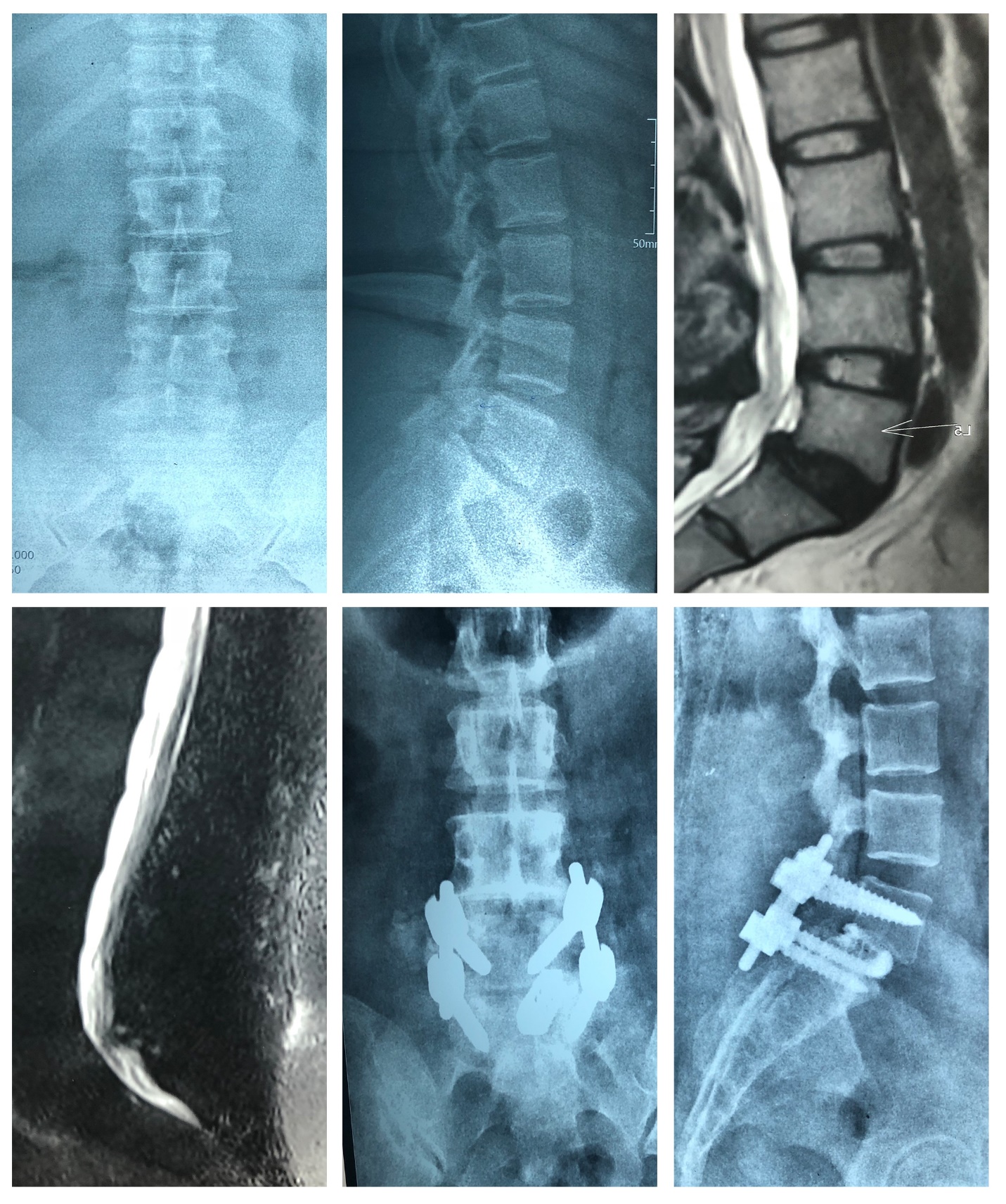 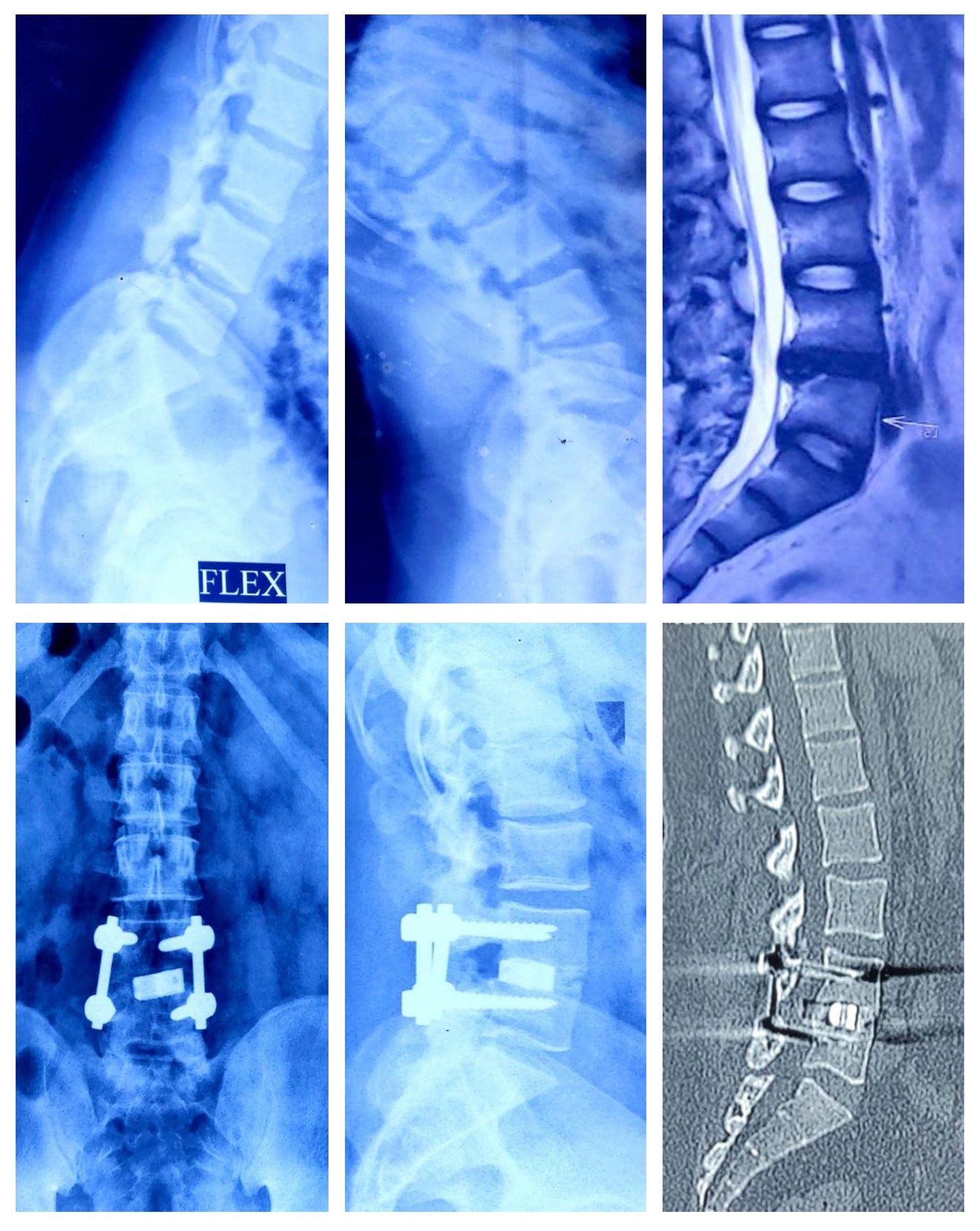 Functional improvement of the patient based on VAS score for back pain, leg pain, and ODI scores. 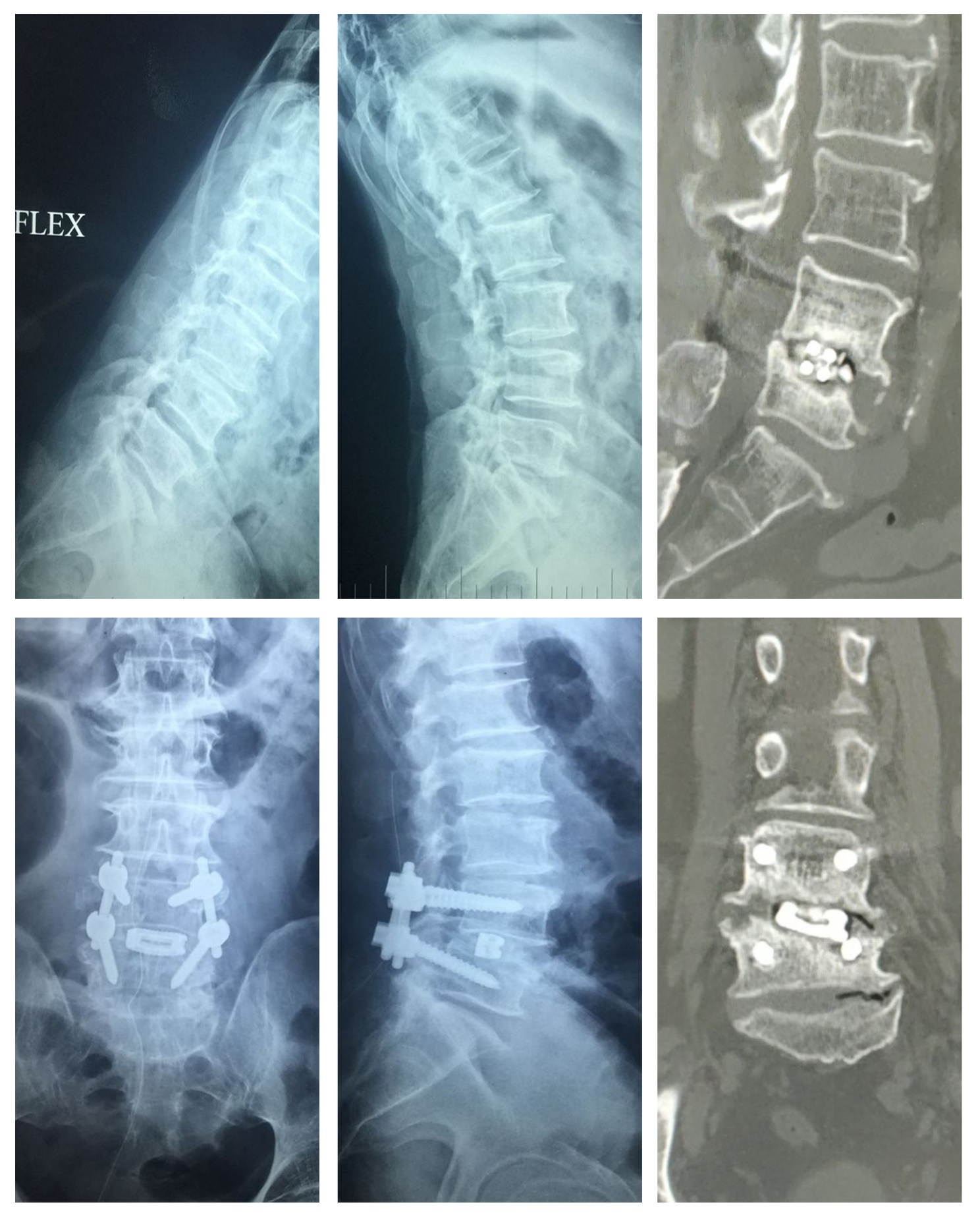 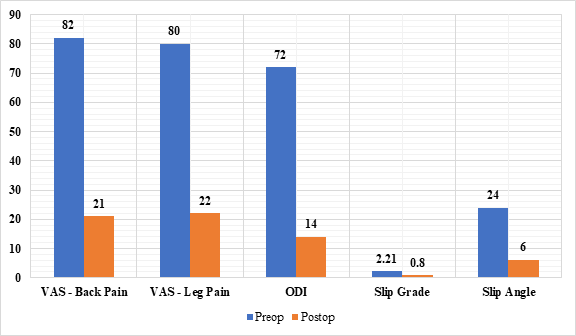 Harms developed the TLIF procedure as an alternative to traditional posterior lumbar interbody fusion (PLIF).The advantage of TLIF is successful fusion without the risk of nerve root tethering, which is a common complication with traditional PLIF techniques. Besides, TLIF eliminates epidural scarring and less surgical time which helps in reducing intraoperative bleeding.10

In TLIF, surgical hardware is applied posteriorly to the fasten fusion rate. Bone graft and interbody spacer stabilize the anterior portion of the spine whereas the pedicle screws and rods are attached to the back of the vertebra. It fuses the vertebra above and below as the bone graft heals.11 The VAS and the ODI are commonly used scales to assess patient-reported outcome measures in spinal deformity patients.12 According to Houten et al. study on 33 TLIF-treated patients who were followed with investigations over a period of 37 months, their functional scores improved from 4.9 to 7.13

Poh et al. study on the two-year outcome of TLIF concluded that all elements of the SF-36, the VAS scores which explains pain level, and the NASS scores enhanced significantly after TLIF with p value less than 0.01.14 Lauber et al. study demonstrated that the median ODI in degenerative spondylolisthesis patients reduced from 23.5 to 13.5 points and in isthmic spondylolistheses patients, it got decreased from 20.5 to 10.95 after 2 years.15 Foley et al.in his study have showed that the ODI score got decreased from 55 before the operation to 11 after the operation.16 Similarly, the VAS score for leg and back pain improved significantly after TLIF in our study. ODI score also showed statistical significance compared to the preoperative period.

The intervertebral foraminal area increased by 45.5% after transforaminal decompression and the intervertebral foraminal area increased by 34.2% after the posterior decompression according to Osman et al.17 Hackenberg et al. showed the success rate of bony fusion of transforaminal lumbar interbody fusion to be around 86%.18 According to Kim et al. the disc space height and the whole lumbar lordotic angle during the radiological evaluation increased at the final follow-up and the radiological union was obtained in 95.4% of the cases.19 Femke et al. study recorded that non-union and loss of reduction radiographically did not affect the clinical outcome.20

Our study has certain limitations. First, the retrospective nature of the study design would not evaluate all the potential preoperative parameters which would have altered the decision of the surgery. Second, the limited sample size of the study done in a single institution would not allow us to generalize the result of the study to the general population. Hence we recommend a large multicentric randomized controlled trial to further validate the findings of this study.