Background: There is an increasing trend of use of cephalomedullary nail for the management of both stable and unstable intertrochanteric and subtrochanteric femoral fractures. Various western and Indian proximal femoral nails with different morphologies are available in Indian market that sometimes creates confusion amongst orthopedic surgeons about which nail to be preferred in different clinical scenarios for accurate outcomes.

Materials and Methods: Ten different types of long femoral nails with 10 mm diameter (5 Western and 5 Indian) available in Indian market were taken and the morphology of these were studied and compared for 9 parameters.

Results: A lot of variation was seen amongst the Indian nails and western nails in proximal diameter, shape of proximal part of nail, distance of lag screw from tip, distance at which actual size of nail becomes 10mm, M-L angle (medio lateral angle), shape of nail shaft, configuration of distal screws, morphology of neck screw and centrum-collum –diaphyseal (CCD) angle.

Conclusion: Design of a nail may prove to be superior in some type of patients and fractures but may not be suitable for others. Pre-operative templating is must and surgeons need to consider all the factors in unison while deciding the type of nail to be used.

Proximal femur fractures are one of the common fractures in elderly and incidence of these fractures is on rise with increased life expectancy. There is an increasing trend of use of cephalomedullary nail for the management of both stable and unstable intertrochanteric and subtrochanteric fractures.1, 2 There are various western and Indian proximal femoral nails (PFN) available in Indian market. Difference in morphology of these nails sometimes creates confusion amongst orthopedic surgeon about which nail to be preferred in different conditions, cost excluded. This project was done to study the morphology of ten different PFNs commonly available in Indian market with an aim to study the importance of these morphological features while choosing the nail in different clinical scenarios.

All measurements were done with help of goniometer and digital vernier caliper. For measurement of M-L angles, the nail projections were drawn on chart paper and then measurement were taken. (Figure 3)

In the above study, nine parameters for five Indian and five western proximal femoral nails were studied.

In all the Indian nails, the shape of proximal part of the nail was cylindrical and nail shaft was smooth. Proximal width in Orthocare and Pitkar was 15 mm and in Shakti Surgicals and Miraculus it was 16 mm. Orthocare and Pitkar implant attained their actual size, that is, 10 mm at a distance of 90 mm from proximal tip whereas in Shakti –I, Miraculus and Shakti –II, this distance was 82 mm, 73 mm and 75 mm respectively. Distance of lag screw from tip in Orthocare, Pitkar, Shakti-I, Miraculus, Shakti –II was 35 mm, 25 mm, 33,5 mm, 25 mm and 28 mm respectively. M-L(Mediolatral) angle varied from 3 to 6 degrees. All the nails had one static and one dynamic screw except Shakti-II that had two static nails. Orthocare and Miraculus had 10.5 mm diameter single helical blade, whereas Pitkar had a lag and an anti-rotation screw. Shakti surgicals implant had two configurations, one with single helical blade (Shakti-I) and one with a lag and an anti-rotation screw Shakti-II).

In all the western nails, the shape of proximal part of the nail was cylindrical with lateral flattening except Intertan that was trapezoid in shape. Nail shaft was smooth in Intertan, PFNA2 and Kanghui and had flutes that were vertical and spiral in Trauson and ZNN respectively. Proximal width in Intertan, Trauson ZNN, PFN A2 and Kanghui was 15.25, 15.8, 15.5, 16.5 and 16.5mm respectively. Distance from proximal tip at which nail attained its actual size of 10 mm was 87 mm in Trauson, ZNN and Kanghui, 80 mm in PFNA2 and 160 mm in Intertan. Distance of lag screw from tip in Trauson and ZNN was 30 mm and in Intertan, PFNA2 and Kanghui was 29 mm, 33 mm and 32 mm respectively. M-L angle varied from 4 to 5 degrees. All the nails had one static and one dynamic screw except Intertan that had two static nails. PFN A2 and Kanghui had 10.5 mm diameter single helical blade whereas Trauson and ZNN had a single lag compression screw. Intertan had integrated lag and compression screw with locking mechanism. 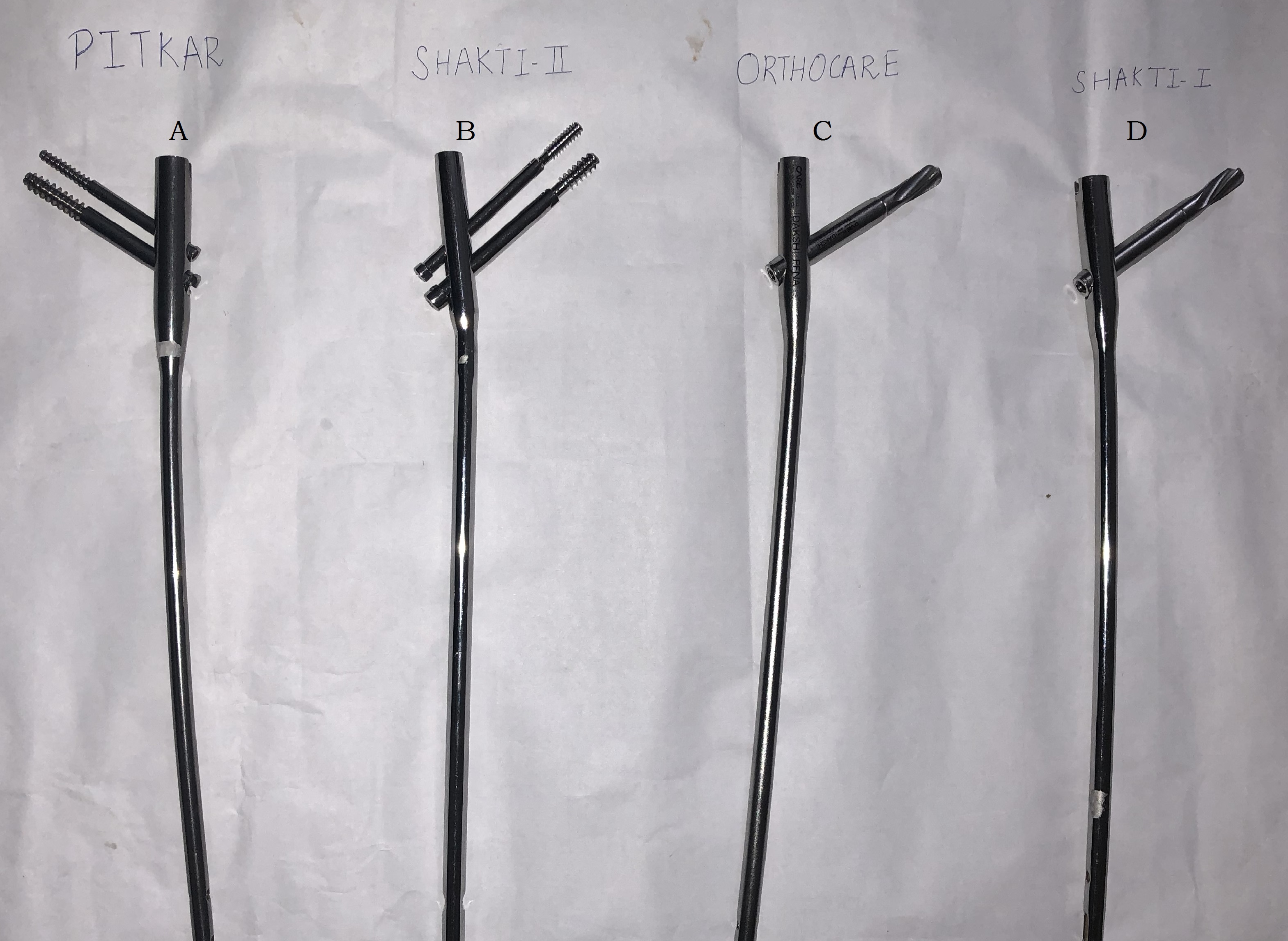 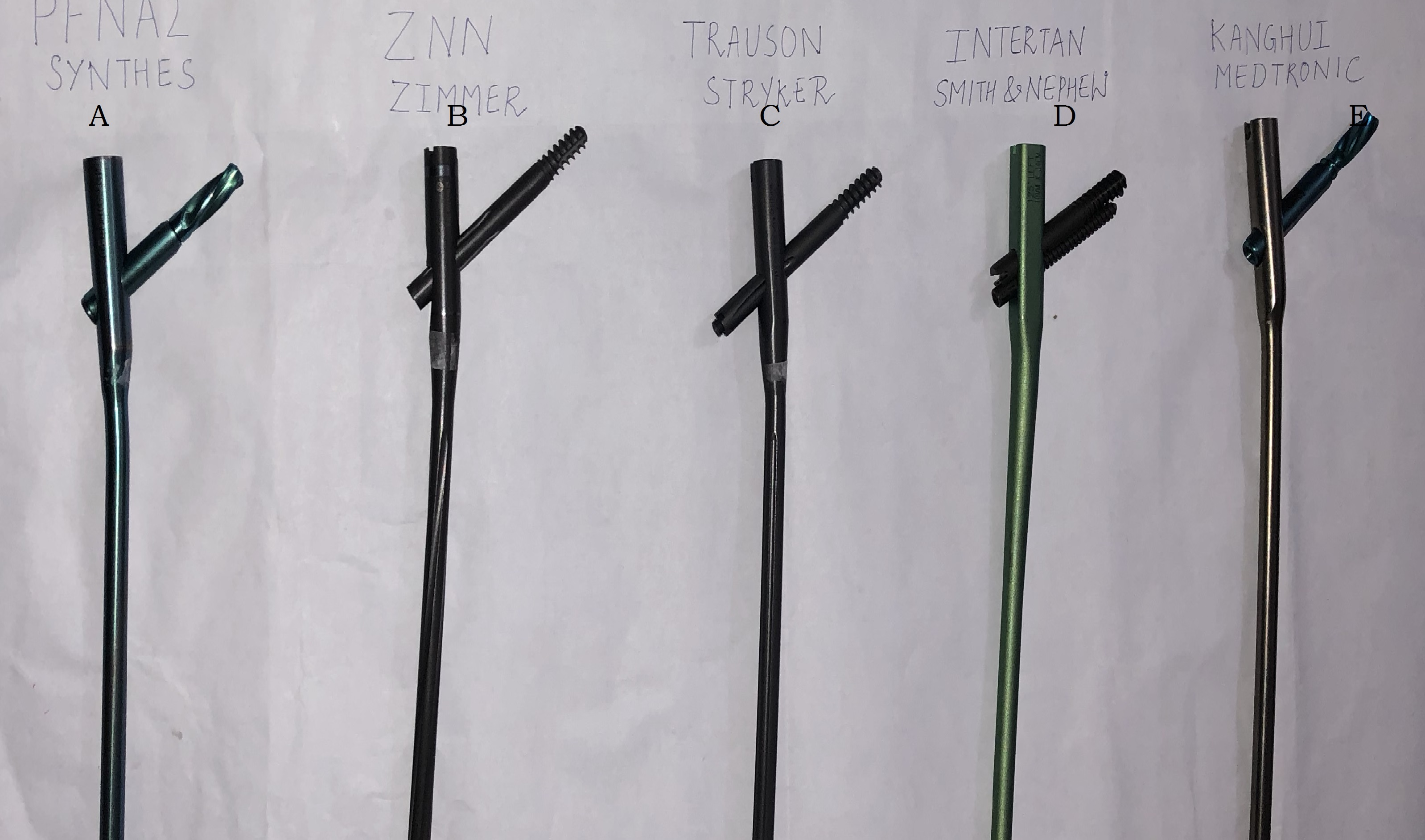 Graphical projection of all nails with M-L angle 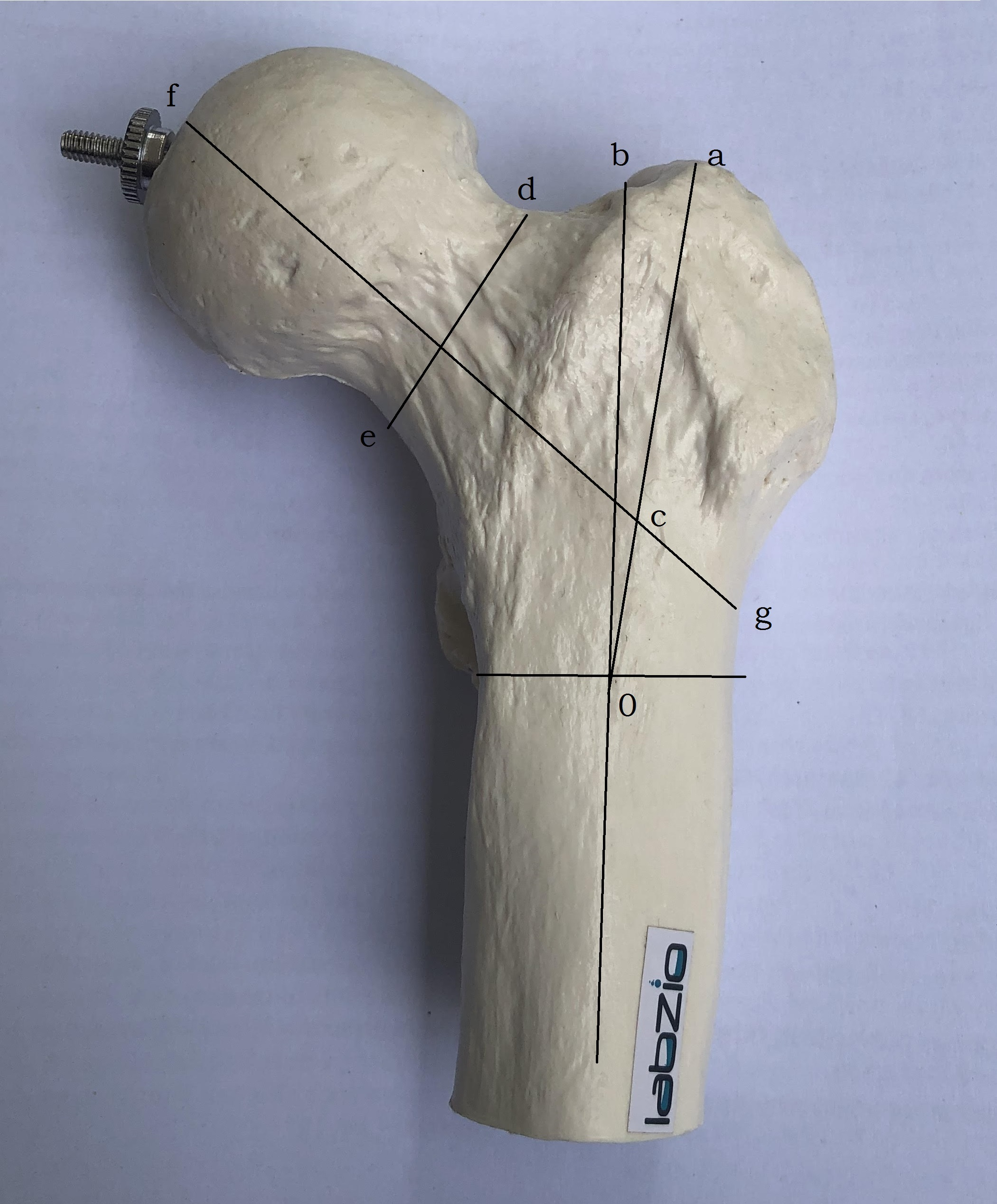 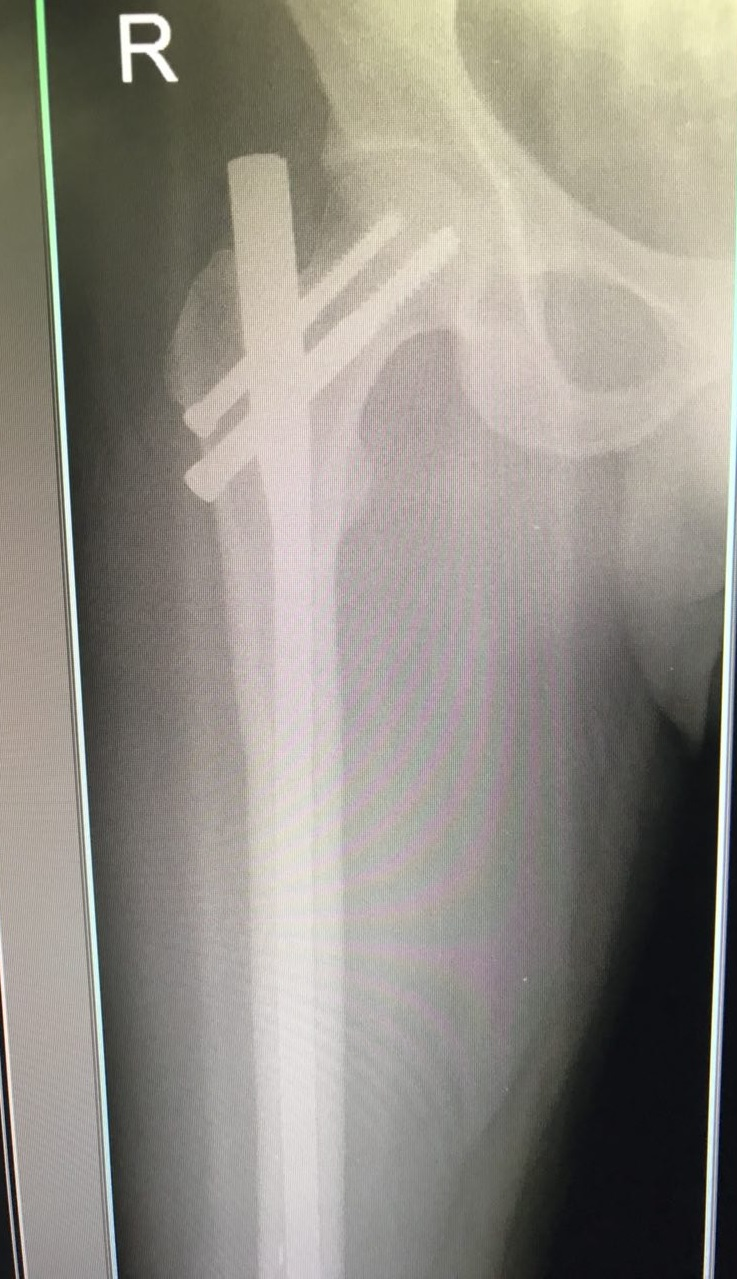 Most of the nails in our study had proximal diameter of 15.5-16 mm which is ideal for Indian population, compared to the previous generation PFNA and gamma nail whose proximal width was 17mm.6 There was high incidence of greater trochanter split and extension of fracture with larger proximal width nails.

All the nails except Intertan(Smith and Nephew) had proximal cylindrical shape that allows easy insertion. Intertan nail had trapezoidal shape that helps in better stability in proximal femur fracture.7, 8 Lateral flattening was seen with western nails that have an added advantage as it decreases chances of lateral cortical impingement while inserting the nail and lessen chances of intraoperative lateral wall fracture and intraoperative loss of reduction.9 Won Chul Shin et al. conducted a study on 100 patients of intertrochantric fractures treated with PFNA and PFNA II and concluded that flat lateral surface of nail can avoid lateral cortical impingement and ensure better fixation.9

Distance from tip at which nail attains actual size (10mm) was 80-90 mm that corresponds to isthmus (narrowest diameter) of shaft of femur in all the nails except Intertan nail where this distance was 160mm, thus making it difficult to use in thin patients and those with narrow medullary canal.

Most of the nails in our study had M-L angle of 4 -6 degrees. Pathrot et al. studied 101 adult human dry femora anthropometrically and radiographically and found the mean Trochantric-Shaft angle (TSA) to be 10.45°±2.34 (range 3 to 15.5).10 To overcome this mismatch and to avoid varus malreduction more medial entry point should be taken.11

In our study, tip to screw distance of nails varied from 25 to 35 mm. Nails with large tip to screw distance have higher chances of protrusion from greater trochanter tip, more so in short statured patients. Pre-operative measurement of distance between tip of GT and point where femoral neck axis crosses the line joining the tip of GT to the lower border of lesser trochanter on the femoral shaft axis should be done. Position of neck screw hole should be at this level.10 Choice of the nail should ensure proper placement at the level of tip of GT without it being too proud or too deep. (Figure 4, Figure 5)

Minimum neck width is an important measurement when using nails which have one lag screw and one antirotation screw. The minimum neck width required for placement of the both femoral neck screw and antirotation screw is equal to sum of the width of neck screw, width of antirotation screw, distance between the two and the margin of safety for placement which is 2.5 mm cranially and 2.5 mm caudally. For most of the Indian proximal femoral nails it is about 24.5mm. It is difficult to use them in patients with very narrow neck width (less than 25mm).10 These neck screws also have chances of Z effect and reverse Z effect.14

Most of the Indian patients have a neck-shaft angle (NSA) varying from 121 to 140 degrees.3, 4, 10 Proximal femoral nails are available with different CCD (Centrum Collum Diaphyseal) angles of 125, 130 and 135 degree except for a few Indian nails that are available in a single configuration. Mismatch between NSA and CCD angle causes difficulty in placement of neck screws accurately. So choice of the nail should be made in a way that CCD angle closely matches NSA.

There is a lot of variation in morphology of proximal femoral nails. One nail design may be superior in some type of patients and fracture but may not be suitable for others. Pre-operative templating is necessary. Measurement of NSA, NW, medullary canal diameter, distance between tip of greater trochanter (GT) and point where femoral neck axis crosses the line joining the tip of GT to the lower border of lesser trochanter on the femoral shaft axis are important parameters that need to be noted pre-operatively while choosing the nail. Orthopedic surgeons need to consider all the factor in unison while deciding the type of nail to be used.

CK Chiu CY Chan VA Singh Is the femoral neck geometry adequate for placement of the proximal femoral nail in the Malaysian population? A review of 100 casesMed J Malaysia200964226