Multiligamentous knee injuries (MLKI) are rare orthopedic injuries with involvement of two or more ligaments in the knee. There are variety of combinations of MLKI and one such relatively common and important injury pattern is anterior cruciate ligament (ACL) plus medial collateral ligament (MCL) injury. Though MCL grade 1 and 2 does not warrant surgical management, grade 3 defintely needs reconstruction or repair according to past studies so as to avoid valgus instability. A retrospective study was conducted evaluating the outcomes of combined ACL and MCL injuries in 22 patients at our centre. Road traffic accidents (RTA) accounted for 45.5% of the total cases as the most common mechanism of injury. Out of 22 patients operated with simultaneous ACL and MCL reconstruction, 14 (63.6%) had good results based on Lyscholm scoring system, 5 (22.8%) had excellent results, and 3(13.6%) had fair result and none of our patients had poor results. Simultaneous single stage management of ACL and MCL injury has advantages like early rehabilitation, reduced number of hospital stay as well as absence of necessity for getting admitted and operated for each ligament separately which also brings down the cost to the patient.

Multiligamentous knee injuries (MLKI) are rare orthopedic injuries with involvement of two or more ligaments in the knee. With increase in the engagement of people in sports activities and with increase in high velocity road traffic accidents the incidence of MLKI is on the rise. There are variety of combinations of MLKI and one such relatively common and important injury pattern is Anterior cruciate ligament (ACL) plus Medial collateral ligament (MCL) injury. Though there are studies advocating isolated ACL reconstructions in this combined injury patterns1, 2, 3 others suggest surgical management for both ACL and MCL to avoid chronic valgus instability thereby increasing stress on ACL graft.4, 5, 6, 7 Though MCL grade 1 and 2 does not warrant surgical management, grade 3 definitely needs reconstruction or repair according to past studies so as to avoid valgus instability.1, 8 There is lack of consensus in the management aspects of this injury pattern like whether to opt for a single sitting or a staged management, whether to operate at a early stage i.e within 3 weeks or late i.e, after 3 weeks since injury etc.. In our study we have treated surgically these cases with reconstruction of ACL and grade 3 MCL injury in single sitting and tried to evaluate their functional outcomes.

The knowledge of knee anatomy may help in understanding the mechanism of injury and the necessary management planning. Knee is the largest weight bearing joint and is frequently injured. Though knee is viewed as a simple hinge joint between femur and tibia, it is a much more complex joint. The “screw home movement” i.e., the 100 of either internal rotation of femur or the external rotation of tibia respectively during terminal 300 of extension provides the necessary tension in the ligamentous structures of the knee so as to provide absolute stability. Unlike shoulder and hip joints where the congruous bony structures and periarticular musculature provides the maximum stability, in knee it is the ligaments that provides stability. The major ligaments of knee are Anterior cruciate ligament (ACL), Posterior cruciate ligament (PCL), which provide anteroposterior stability and the Medial collateral ligament (MCL) and the Lateral collateral ligament (LCL), which limits valgus and varus laxity respectively.

The ACL has two bundles i.e., anteromedial and posterolateral bundles. Anteromedial bundle prevents anterior translation of tibia while posterolateral bundle resists excess rotation. ACL originates from medial surface of lateral femoral condyle and inserts onto intercondylar eminence of tibia just behind the anterior horn of medial meniscus. Similarly PCL originates from posterior tibial sulcus below the articular surface and inserts onto the anterolateral surface of medial femoral condyle. It has two bundles i.e. anterolateral bundle that is tight in flexion and posteromedial bundle, tight in extension.

The collateral ligaments, medial and lateral provides stability in the sagittal plane. The MCL is primary restraint to valgus stress of the knee. It has superficial and deep layers. The superficial MCL is located in layer two of the medial knee with posteromedial corner ligaments and medial patello femoral ligament. Its femoral attachment is on the medial epicondyle, 1cm anterior and distal to the adductor tubercule. Its tibial attachment is at the proximal tibial periosteum, approximately 4.5cm distal to the joint line, deep and posterior to the pes anserinus. Deep MCL is located in layer three of the medial kee with the joint capsule and it is composed of menisco femoral and menisco tibial ligaments.

Valgus stress is the most commonly reported mechanism of injury combined with flexion and external rotation for combined ACL and MCL injury. Other common mechanisms may include pivoting movement, sharp deceleration or a forced hyper extension.

Ours is a retrospective study evaluating the outcomes of combined ACL and MCL injuries in 22 patients at our centre in which the ACL was reconstructed arthroscopically and MCL was reconstructed with open approach (Figure 1, Figure 2, Figure 3) between 2014 to 2018 by the same operating surgeon. Pre-operative and post-operative Lyscholm and IKDC scores were assessed to evaluate the outcomes. Patients were evaluated clinically during their follow up visits and for those who could not come for follow up, data was collected over phone. Statistical analysis was done and p value calculated to assess the statistical significance between the comparative data. 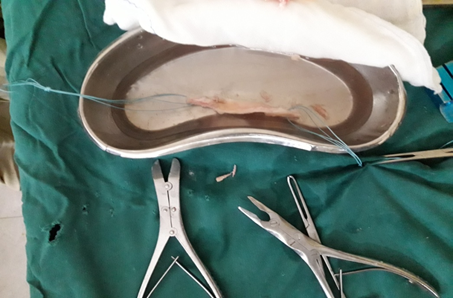 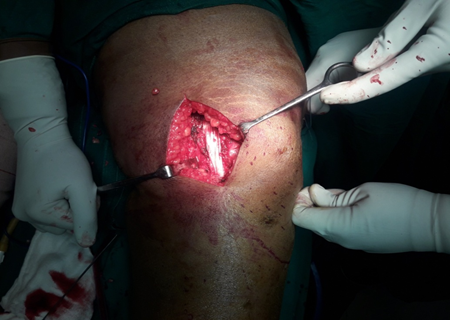 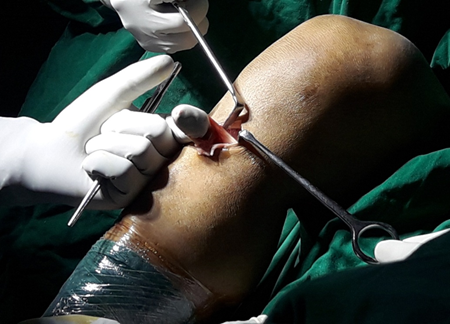 ACL was arthroscopically reconstructed using either bone patellar tendon bone (BPTB) or hamstring graft. Diagnostic arthroscopy was done and graft harvested. Femoral tunnel and tibial tunnel prepared and graft passed and fixed with interference screws. Now the valgus stress test was done to intraoperatively check for instability and opening up of the medial joint line was assessed. If it was found to be a grade three injury, MCL reconstruction was done using hamstring graft through open technique. On tibial side the graft was fixed to the tibial periosteum, approximately 5cm from the joint line, deep and posterior pes anserinus and on the femur side it was fixed to the medial epicondyle, 1cm anterior and distal to adductor tubercle. The interference screws were tightened while keeping the knee under varus stress.

In our study we have tried to evaluate the surgical outcomes of the simultaneous ACL and MCL reconstruction in patients presenting with both ligament injuries. Out of 22 patients who were treated, 12 were in the age group of 21-30 years and 17 out of 22 were male population. Road traffic Accidents (RTA) accounted for 45.5% of the total cases as the most common mechanism of injury followed by Domestic fall which caused 31.8% of the injuries. Sports injuries resulted in ACL plus MCL injuries in 22.7% of our patients. Out of 22 patients operated with simultaneous ACL and MCL reconstruction, 14 (63.6%) had Good results based on Lyscholm scoring system, 5 (22.8%) had Excellent results, and 3(13.6%) had fair result and none of our patient had poor result. Comparative analysis was done between pre surgery and post surgery Lyscholm scores and we found that there was a statistically significant difference between them with p value <0.001. The mean post-operative Lyscholm score for patients who underwent single stage reconstruction of ACL and MCL were 89.95 with A SD of 5.593 and a p value of <0.001. The mean post op IKDC scores for the same patients was 86.

Combined ACL and MCL injuries posed challenge to an orthopedic surgeon regarding the decision making for management in these cases as there is lack of consensus regarding this. At 20-30 degree of knee flexion, MCL is the primary stabilizer of the medial compartment and on valgus stress test, medial pain with no translation is grade 1 injury, medial pain with translation upto 5mm is grade 2 and medial pain with translation upto 10 mm is grade 3 injury.9 ACL injury was corroborated by a positive Lachmans test. In our study, we have used semitendinosus and gracilis tendon autografts or Bone patella tendon bone (BPTB) graft for ACL reconstruction and Semitendinosus from opposite side or from the same side for MCL reconstruction. ACL was reconstructed first and intraoperative valgus stress applied and the opening up of the joint on the medial side was evaluated and MCL injury was graded and if found to be unstable, MCL reconstruction was undertaken. Now coming to the outcome of the surgical management of simultaneous reconstruction of ACL and MCL, our study showed an average post-operative lyscholm score of 89.9 and there was a statistically significant improvement in the functional outcome assessed using Lyschom score with a p value <0.001. (Table 1). 86.4% of our patients showed excellent and good results. This is almost similar to the findings in other study by Halinen et al. which had 83% of study population with excellent and good score. The mean IKDC score in our study was 86 which was similar to another study by Zhang et al.10 (Table 2)

ACL plus MCL injuries requiring combined surgical management though rare, MCL injuries which are grade 3 along with ACL injury warrants surgical reconstruction so as to achieve good functional outcome without any stress on the ACL graft. Though there are controversies related to timing of surgery and regarding single stage or multistage management, in our management we have used simultaneous reconstruction of ACL and MCL technique irrespective of the time since injury with a basic pre requisite of Knee ROM of atleast 0 to 100 degrees prior to surgery if at all there was stiffness. Simultaneous single stage management of ACL and MCL injury has advantages like early rehabilitation, reduced number of hospital stay as well as absence of necessity for getting admitted and operated for each ligament separately which also brings down the cost to the patient. Though our study throw some light on the management aspects of ACL and MCL injury, there is necessity for a prospective study involving large number of patients so as to establish a definitive protocol regarding its treatment.