Methods: In a non-control prospective interventional study on 30 patients with extra articular distal tibia fractures we used the JESS fixator as a definitive treatment modality. Fibula was internally fixed using a nail or plate when fractured. After achieving temporary fracture reduction, two pins were inserted each in tibia and calcaneum and were connected by JESS rods using clamps. In case of open fractures wound was managed by serial debridement and dressings as required. The patients were followed up for a minimum of 12 months.

Results: There were 20 male and 10 females. The mean age was 39.1 years (range 18-60 years). There were 18 open and 12 closed fractures. According to the AO/OTA classification of extra articular distal tibia fractures 20 belonged to type A1, 3 in type A2 and 7 in type A3. The mean time to union was 15 weeks and the average duration of surgery was 35 minutes. At the final follow up all fractures united except one and the mean AOFAS score was 83.13. There were 2 cases of pin track infections, one non-union and one mal-union. One patient had ankle arthritis managed conservatively till last follow up.

The Fractures of tibia are one of the most common fractures of which 10-13%1 has been reported to occur in the distal tibial region. Management of distal tibialmetaphyseal fractures is challenging owing to poor soft tissue envelope, limited vascularity and preponderance for open fractures. Internal fixation using minimally invasive plates2 and nails3 are also associated with complications like non-union, infection, skin necrosis, wound dehiscence, anterior knee pain and neurovascular compromise. External fixation based on the principle of Ligamentotaxis4 has emerged as a suitable method for the management of these fractures avoiding the aforementioned complications. We did a prospective study to evaluate the role of Joshi’s External Stabilization System (JESS) as definitive management in the management of distal tibia fibula fractures.

This prospective study included 30 patients with distal tibia and fibula fractures September 2017 and August 2019 presenting to a large tertiary care center in central India. All closed and open AO type A1, A2, A3 fractures in adult patients were included in the study. Patients with neurovascular compromise, pathological fractures and bony injuries in the ipsilateral limb were excluded. Written and informed consent was obtained from each patient authorizing radiographic examination and clinical documentation. Institutional review board clearance was sought prior to the study.

All cases were operated under Spinal Anesthesia under a tourniquet applied on the upper thigh. The fibula was fixed first by nail or plate usingz standard lateral pproach in order to attain length and proper rotation. Two parallel Denham pins were inserted from medial to lateral in calcaneum whereasparallel Steinman pins introduced into the proximal fragment at least 6cm above the fracture under C arm guidance parallel to and in the plane of calcaneal pins. The distal and proximal pins were connected by JESS rods on medial and lateral aspect with the help of Allen keys (Figure 1, Figure 2). Final reduction was adjusted with help of distraction and compression mechanism possible in JESS under c-arm guidance. Pin track dressing was done and a below knee slab was applied in all patients. Appropriate antibiotics were administered for prophylaxis of infection depending on the status of soft.

Tissues. Quadriceps and Hamstring strengthening along with active mobilisation of toes and knee was started on first post-operative day and non-weight bearing walker assisted ambulation was started as tolerable.

The first follow-up was done at 2 weeks when sutures were removed and below knee slab continued.On the second follow-up at 6 weeks check x-ray was done, slab removed and JESS was continued. Toe touch weight bearing ambulation and ankle mobilization were started if the fracture showed reasonable signs of healing. Full weight bearing was allowed at 10-14 weeks on the basis of radiological and clinical recovery. JESS was removed at the time of radiographic union which was defined when plain radiographs show bony trabecular or cortical bone crossing the fracture site in at least ¾ cortices (Figure 3). Clinical union was defined as absence of abnormal mobility at fracture site in two planes.

Outcome was evaluated using the AOFAS 100-point scale by the same observer to minimize inter-observer bias. Depending on their AOFAS scores patients were divided in 4 grades in the form of excellent, good, fair and poor where 86-100 was Excellent, 71-85 was Good, 50-70 was Fair and less than 50 Poor. Excellent and good were considered as acceptable functional outcome whereas fair and poor were considered as unacceptable outcomes.

The average age of patients in our study was 39.1 years with a range from 18 years - 60 years. Majority of patients were in the age group of 18-30. There was a male preponderance with a Male: Female ratio of 2:1. None of the patient had a bilateral injury. Out of 30 cases 24 cases had history of RTA while 6 cases had domestic fall. Out of 30 cases in our study 18 had closed fractures while 6 had Grade 1 open fractures and 6 had open grade 2 fractures. All wounds healed without requirement of reconstructive surgery. The mean time to union was 15weeks. The average duration of surgery was 35 minutes. 21 out of 30 patients had an AOFAS score between 86-100 (excellent) while only 2 patients had a score of less than 50 (poor). Rest of the

patients had Good or Fair AOFAS score.The mean score was 83.13 with a p-value of 0.036 which was statistically significant. Two patients (6.67%) had pin track infection, 1 patient had nonunion, 1 patient had malunion (3.33%) of the distal tibia requiring secondary procedure. One patient (3.33%) had pain due to ankle arthrosis which was managed conservatively till the last follow up at 12 months. 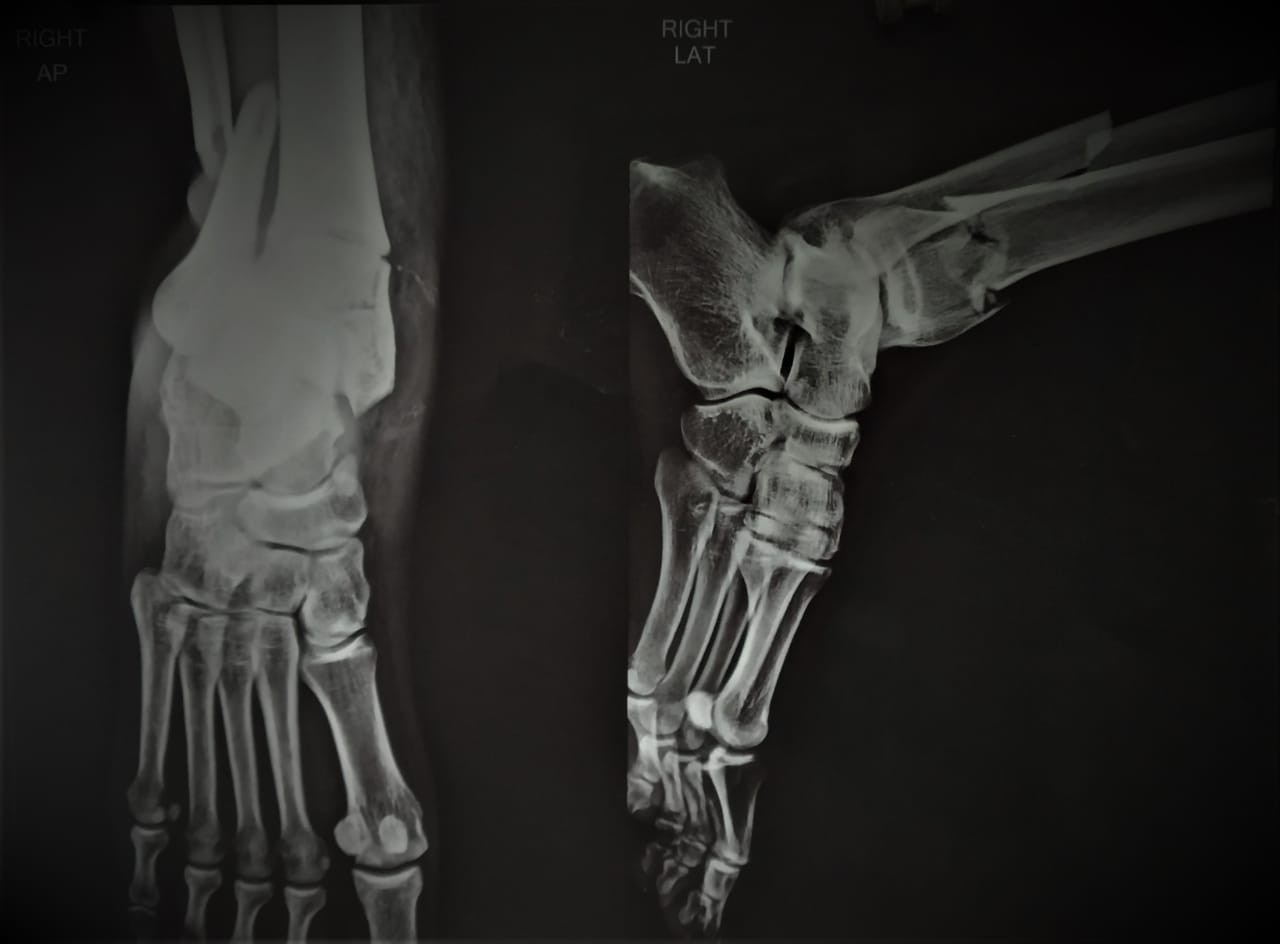 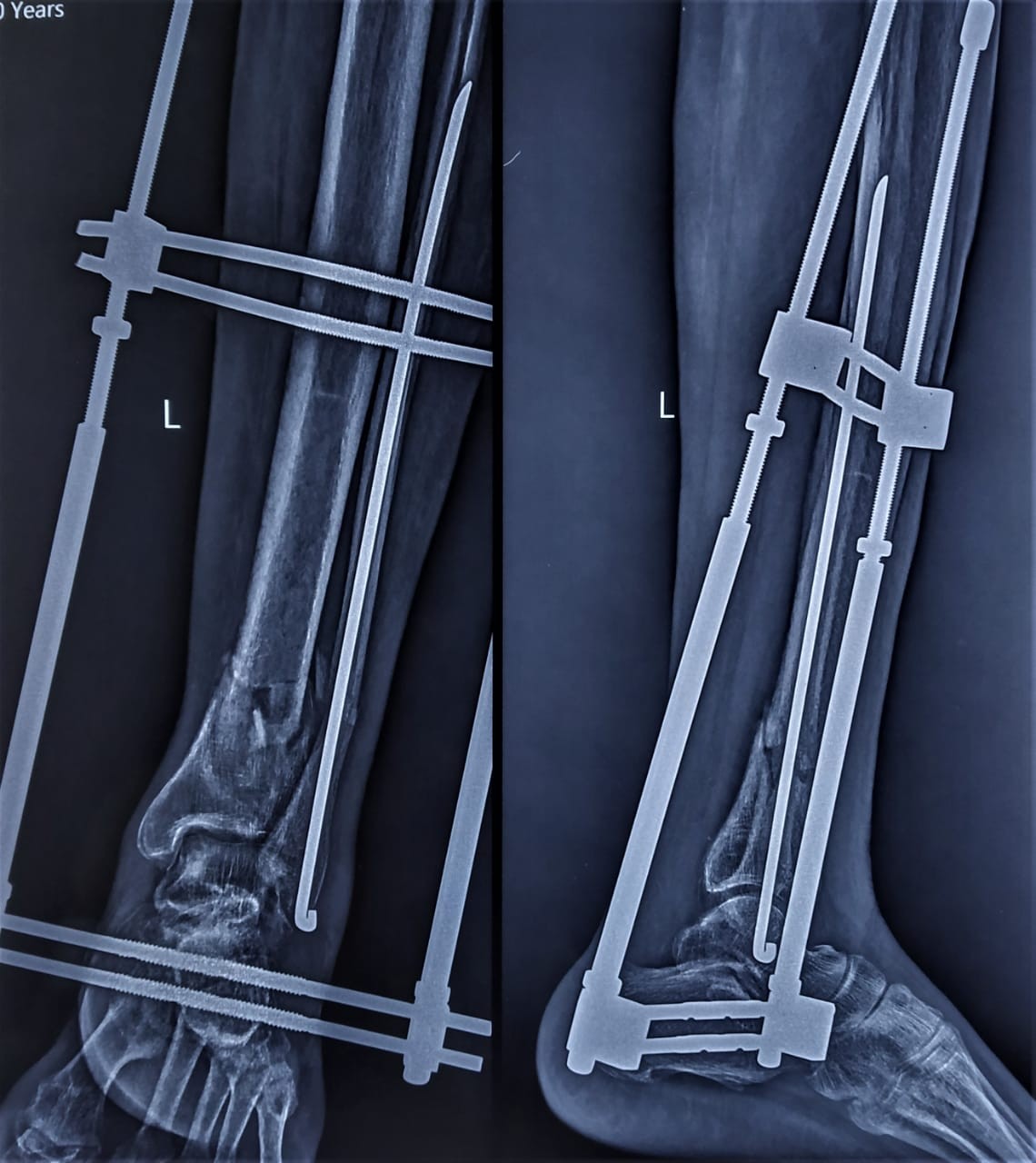 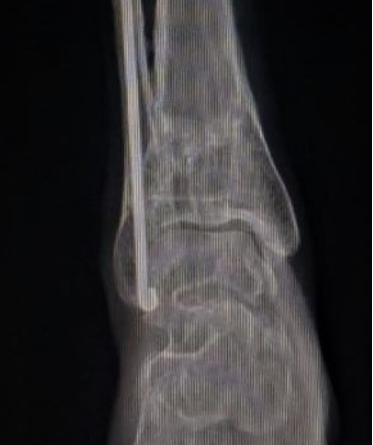 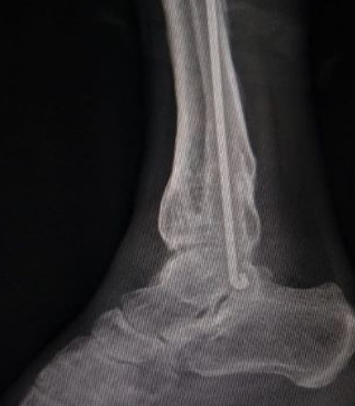 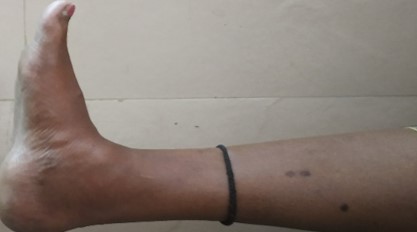 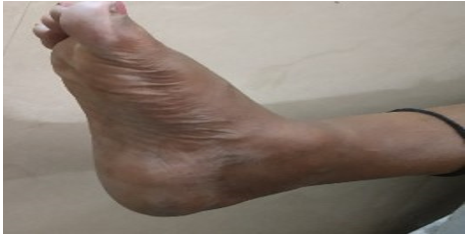 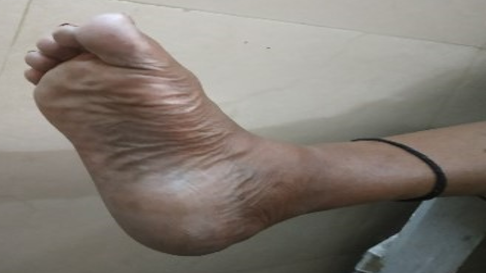 The optimal management of distal tibia fractures is a challenging task for the foot and ankle surgeon and no absolute treatment protocol or consensus is available in the literature.5 A number of modalities have been used to treat these injuries with variable results. The results of operative treatment of distal tibia fractures are dependent on the severity of the initial injury, the quality and stability of fixation and soft tissue status. The goal of tibial fixation is to maximize fracture stability without increasing soft tissue morbidity. Failure to recognize this often results in repeated surgery and serious complications.

In our study maximum patients were in the age group of 18-50 years with a mean age of 39.13 years. Dhanasekaran et al6 in their study observed the mean age to be 32.8 years in these injuries. A higher incidence of distal tibia fibula fracture in younger population is dueto their more active involvement in outdoor activities making them more prone to road traffic accidents (RTA). The male to female ratio of 2:1 in our study was in correspondence with Gabriele Falzarano et al.7 who found the ratio to be 3.65:1 and Jing-Wei-Zhang et al.8 with a ratio of 3:1. Preponderance of male patients is due to males being more indulged in travelling, physical labor, working in fields and factories. In our study the most common mode of injury was RTA (53.33%) while Jing-Wei-Zhang et al7 reported 55% of their cases due to RTA.

In our study we used the AOFAS 100-point score scale for functional evaluation of the patients at the final follow-up. The mean AOFAS score at 6 months was 83.13 with a p value of 0.036 which was statistically significant. Barbieri et al10 treated 37 tibial plafond fractures with hybrid external fixation and followed up for an average of 15.2 months. They found 21 good or excellent results with only 6 patients had a poor outcome. Degenerative changes were seen on follow up radiographs in 4 patients. Complications occurred in 12 patients (35%) and included 1 skin slough, 5 pin tract infections, 3 deep infections, 3 non-unions, and 3 loss of reductions necessitating frame revision. They noted results comparable with previous studies while decreasing the number of complications resulting from treatment.

Marsh et al11 evaluated 49 displaced fractures of tibial plafond fixed by articulated external fixator. The patients were followed for an average of 30 months post-surgery. The average ankle score was 64 points and they concluded satisfactory results in terms of ankle function and arthrosis and decreased risk of early complications associated with these fractures.

Pugh et al.13 studied outcome using an ankle spanning unilateral half pin frame, an ankle sparing ring hybrid fixator and ORIF in fractures of tibial plafond and found more chances of loss of reduction when external fixator was the treatment modality, on the other hand, more serious complications in the ORIF group which included 2 amputations out of 24 cases.

Tenny and Wiss14 reported 37% of patients having deep infections while McFerran15 reported 40% having major complication after plating of distal tibial fracture.

However, in a meta-analysis on complications of internal fixation versus minimal internal fixation with external fixator in tibial plafond fractures, Wang et al.16 concluded that there is no significant difference in nonunion, malunion, infections and arthrosis rate.

Similarly, Zhang et al.17 in a meta-analysis including 9 studies and 498 pilon fractures suggested that Limited Internal fixation with External Fixation (LIFEF) is not recommended in pilon fractures due to higher complication rate but similar union rate as compared to ORIF.

We encountered 2 cases of pin track infection and 1 case each of malunion and non- union in our study. Pin track infections settled on lavage and antibiotics. The patient with malunion was treated later by Illizarov’s ring fixator for correcting the deformity. The patient with non-union was treated by revision fixation and bone grafting using locking plate. We feel that extensive surgical dissection and a race for achieving an anatomical reduction leads to de-vascularization of the fracture fragments and compromises the soft tissues increasing the chances of infection and non-union. Moreover, infection in the setting of already compromised soft tissues further jeopardizes the vascularity affecting healing. Although anatomical reduction is crucial in reconstruction of articular surface to achieve pain free ankle motion, preserving the biology of the fracture is of equal importance.

JESS has an unparallel ease of application with good stability allows early knee and ankle movements and weight bearing. Since it is applied in a percutaneous manner it reduces the length of hospital stay and complications associated with open fixation. It is highly modular system and has an advantage of Distraction/compression and varus/valgus alignment even in the post-operative period. It accelerates union by preserving the fracture hematoma and soft tissue attachments of the fracturefragments. It is especially useful in open fractures as wound management is easy and the chance of biofilm formation and persistent infection is minimized.

Our study had a major limitation of a relatively small number of patients and the lack of a control group. We recommend studies with larger sample size, longer follow up and comparison group so that the use of JESS as a standard treatment modality in distal tibia fractures could be validated.