Patel, Pushkarna, Patel, and Dave: Outcome of technique of total knee arthroplasty by independent total femoral first followed by tibial cuts as a measured resection based on anatomical landmarks along with scientific soft tissue balancing: A surgicoclinical study

Outcome of technique of total knee arthroplasty by independent total femoral first followed by tibial cuts as a measured resection based on anatomical landmarks along with scientific soft tissue balancing: A surgicoclinical study

Introduction: Total knee arthroplasty is one of the commonest musculoskeletol pain relieving surgery now a days. The long legacy of the different surgical techniques attracts the orthopaedic surgeons to opt for better results oriented techniques. Since in the mid 19s of origin of early knee arthroplasty to 2014 of gap balancing vs measured resection technique from US to the recent navigation & robotics era, different study showed improved results. For developing countries with financial constrains cost effective & results oriented more studies warranted.

Objectives: To study the results of all femoral cuts first followed by tibial cuts as a measured resection technique based on anatomical landmarks followed by scientific soft tissue balancing for total knee arthroplasty.

Materials and Methods: We have analyzed total (n= 126) the total knee replacement surgeries operated by our team during last 48 months retrospectively. Mean age was 66 years. All the Knee arthritis classified by Kellgren & Lawrence classification preoperatively. Results were evaluated by Oxford knee score (OKS).

Conclusion: Total femur first followed by tibial measured resection cuts based on anatomical landmarks backed up with scientific soft tissue balancing & admission of all the other disciplines for total knee arthroplasty is a results oriented technique for increasing burden of operative patients & decreasing social morbidity.

Total knee arthroplasty is one of the commonest orthopedic lifestyle surgeries now a days. It considerably decreases the morbidity associated with the knee joint arthritis & pain. Increased in the demand of the patients & life expectancy leads to increased number of total knee joint replacement surgeries throughout the country.1 The success of the total knee procedure depends on many factors, including patient selection, prosthesis design, the preoperative condition of the joint, surgical technique (including soft tissue balancing and limb alignment) and postoperative rehabilitation. The results of the total knee replacement (TKR) has been challenged by different techniques as measured resection, gap balancing, tibial cut parallel to the posterior femur cut, navigation & in the recent era by the robotics TKR.

TKR has come across long ways since T. Gluck designed & implanted the e prosthesis made of ivory & fixed the implant with plaster of paris & colophony (pine resin).2 In 1971, Freeman and Swanson began using the Imperial College London Hospital (ICLH) knee.3 It sacrificed the cruciates completely & only relied on component geometry & soft tissue balancing but later on discontinued.

In the recent era the surgical navigation & now the robotics techniques all have been developed to reduce the errors related to surgical component alignment & help measure knee kinematics intraoperatively.4 As per our long years of training & evolution we developed a vision that success of TKR has not only lies on the knee balancing. It is rather reproducing dynamic knee kinematics as part of the lowerlimb engine.

To study the Total femoral cuts taken according to the anatomical landmarks followed by tibial cuts later on; according to the tibial cut standard directions & backed up by scientific soft tissue release according to the deformity indications with our special long term training in the field of knee joint reconstruction.

This is a retrospective study on (n=126) knees of 90 patients who underwent total knee replacement (TKR) from year January 2017 to December 2020. All cases were done by senior joint replacement surgeon & team with fast rehabilitation protocol. The patients were thoroughly informed & consented for the procedures.

We have simply classified knee arthritis according to the knee deformities 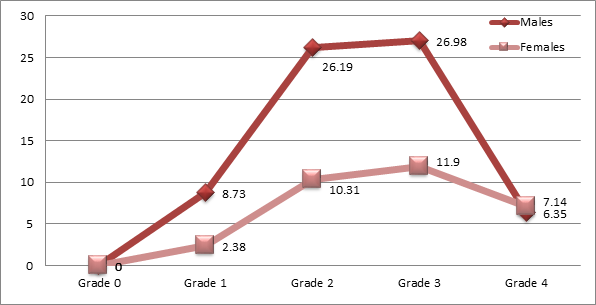 We have chosen the femur first approach with all the femur condylar cuts to be taken first than the soft tissue balancing & tibial cuts. First cut was distal femur cut with 5-7 degree valgus in varus knees & the valgus distal femur cut kept less i.e. 3-4 degree in varus knees. Trans epicondylar exis (TEA) was taken as a reference for the anteroposterior (AP) cut; as an AP cut was taken with 3 degree of external rotation in flexion. In our study we have used the anterior referencing zig for the femora cuts. Tibial cut was taken perpendicular to the tibial axis with rough reference to the second metatarsal for the rod. The tibial perpendicular cut to the long axis was doubly checked with alignment rod always.

The soft tissue release was done according to the extent of deformity. Tibial cut initially was taken minimal later on revised according to the need of the balancing. The extent of soft tissue release was determined by the deformity. We took the gradual approach which has a combination of measured resection & gap balancing both. The soft tissue balancing in our technique was achieved with the aim of rectangular flexion & extension gap which was measured by block to titrate the soft tissue balancing. Standard notch cut for the femur & keel cut for the tibia was taken. The tibial base plate is properly put with the alignment rod with due care not to fix the component in internal rotation. All the posterior & medial or lateral tibial & femoral osteophytectomy done. For varus deformity medial tibial plateau plasty was done. Thoroughly posteromedial & medial soft tissue releasing was done. No patellar resurfacing in our study but patelloplasty was done in all cases. No any degree of postoperative flexion deformity was accepted. No any case of rheumatoid arthritis in the series. We used same company primary metal back modular implant & highly crossed linked polyethylene insert in all cases. In (n=5) cases we used tibial rod where varus was >30 degree. We used vaccusuck drain for postoperative 48 hours period.

We did the post operative x-rays on the day of the surgery. On the next day we did the CBC, hemoglobin & routine blood investigations. Ankle pumping physiotherapy on the day of the surgery, knee bending on the next day of surgery & standing at next day of surgery done. We have used the tranexemic acid, intrawound our special bupivacaine & ketorolac cocktail injection, tourniquet for intraoperative blood loss control & strict antiseptic sterile discipline.6 The results was evaluated by oxford knee scores(OKS)7 (Figure 2). The OKS is freely available at “http://phi.uhce.ox.ac.uk/ox scores.php” and widely used in cohort studies and by some joint replacement registries.8, 9, 10 Completion and scoring of the OKS is simple; each of 12 questions carries equal weighting (1 to 5) to provide an overall score between 12 and 60.11

The outcome categories for the OKS have been reported based on the following cut points: excellent (>41), good (34–41), fair (27–33), and poor (<27).12, 13 For <65 years of age 35 had excellent, 13 had good, 3 had fair & no patient had poor results. For >65 years of age 51 had excellent, 18 had good, 5 had fair & 1 had poor result. No patient (n=0) had post-operative instability, No patient had patellar tracking problems, No (n=0) patient had infection or deep vein thrombosis. One (n=1) patient had post-operative fall at 24 hours postoperative that led to juxta prosthesis periprosthetic fracture at tibial site. That patient later on fixed with locking periprosthetic plate & united at 2 months which has led to poor patient psychological impact. Three (n=3) patient had superficial skin problems that later on cured by Ice pack application & vitamin E along with multivitamin support. 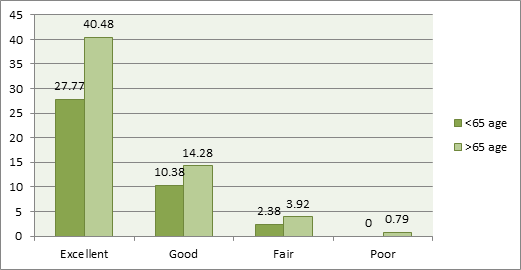 The trans epicondylar exis (TEA) is the line joining the medial epicondylar ridge to the lateral epicondylar prominence.14, 20 In the flexion extension axis of the TEA corresponds to the knee collateral ligaments origin20 The TEA is the good reference to determine the original neutral rotation of the femur component.14 Good patellofemoral tracking can be achieved by proper native femoral component placement with the reference of trans epicondylar exis & placing the femoral component parallel to the TEA.21, 22, 23, 24 A magnitude of femoral condylar lift off will be greatly decreased as noted by Insall et al.24 if the femoral component was placed parallel to the TEA axis in a kinematic analysis. If femoral component will be placed in parallel to the TEA it will be great aid in achieving rectangular flexion gap (90% using the TEA, 83% using the AP axis, and 70% using the posterior condylar axis) in an analysis performed by Olcott and Scott.23 When there is posterior condylar hypoplasia or erosion in advanced arthritis & even in the revision knee arthroplsty the TEA reference has played the major role. 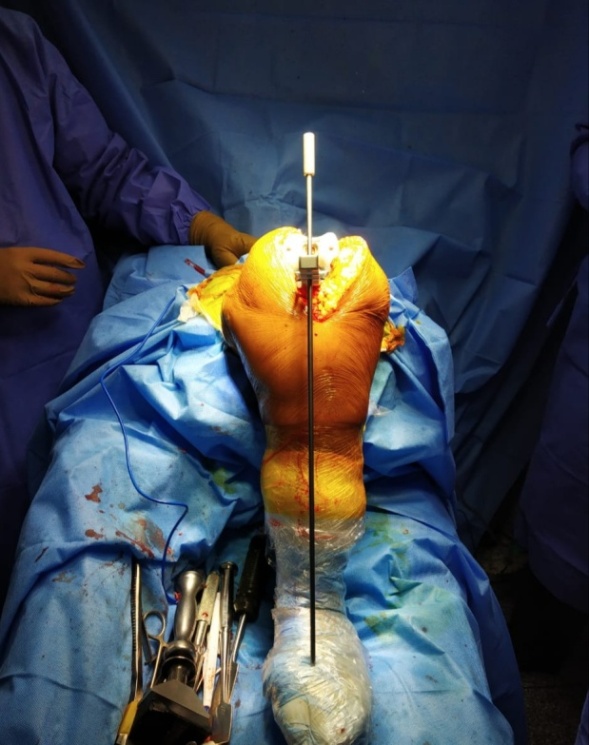 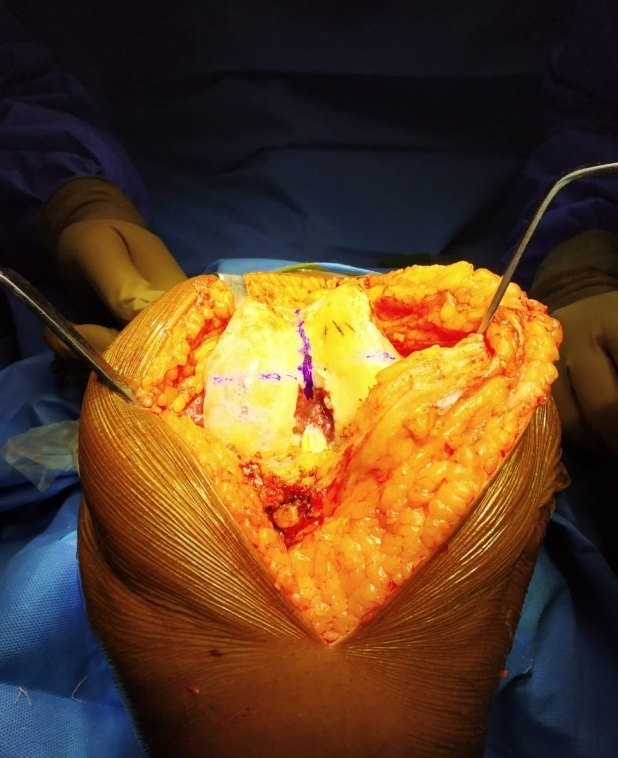 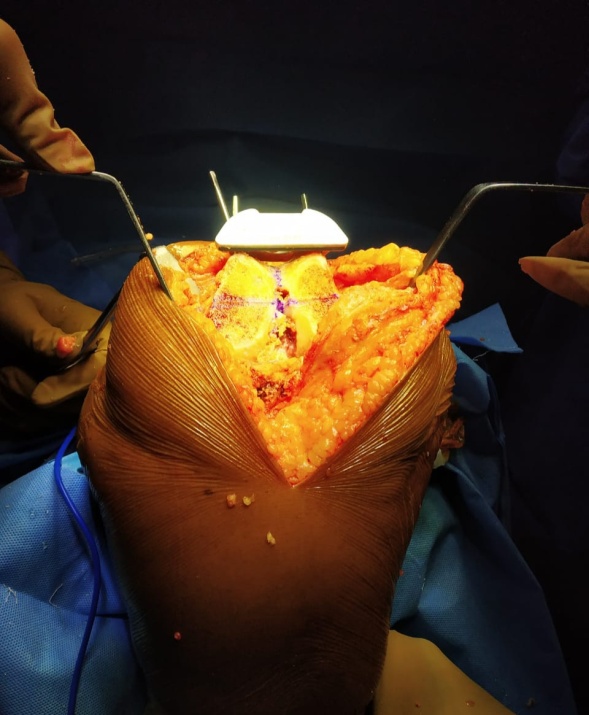 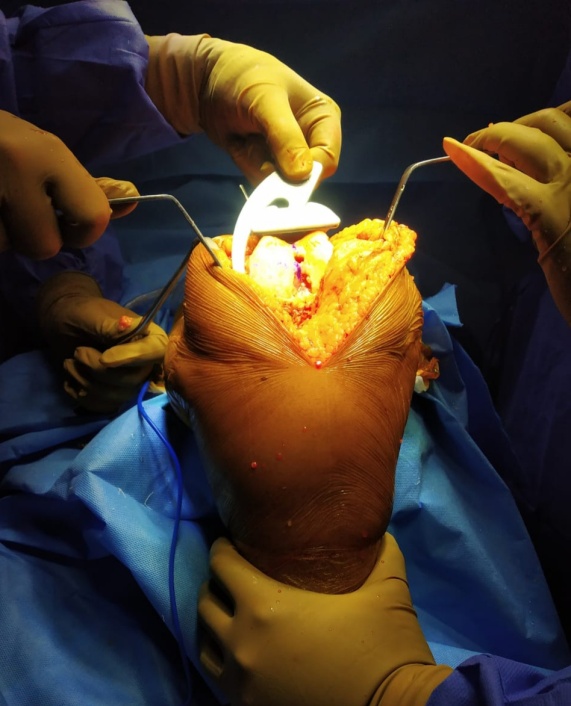 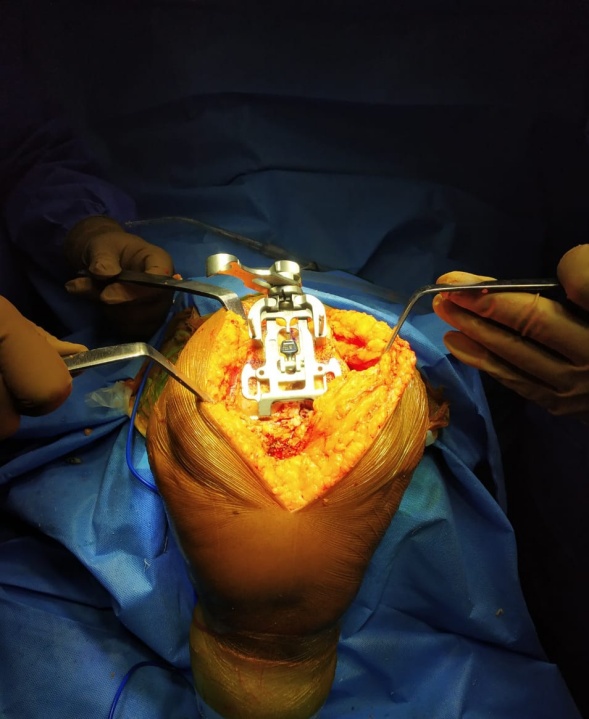 Tibial cut perpendicular to long axis of tibia with minimum 8 mm cut initially later on can be modified. 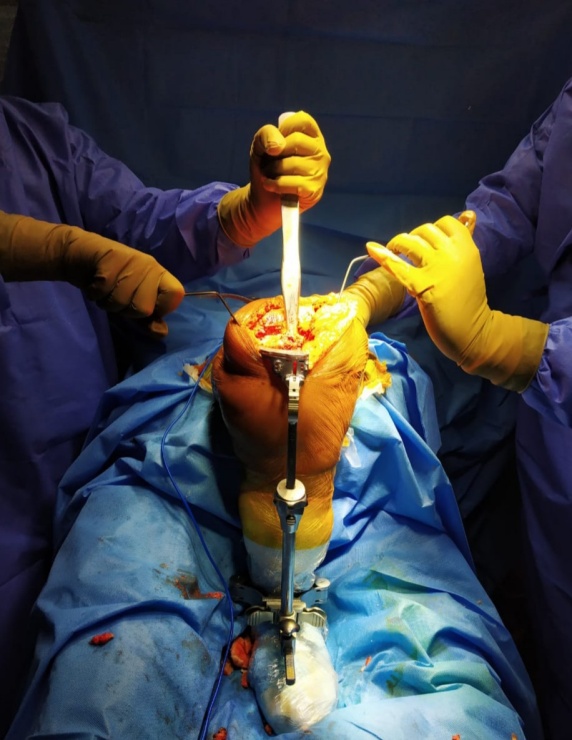 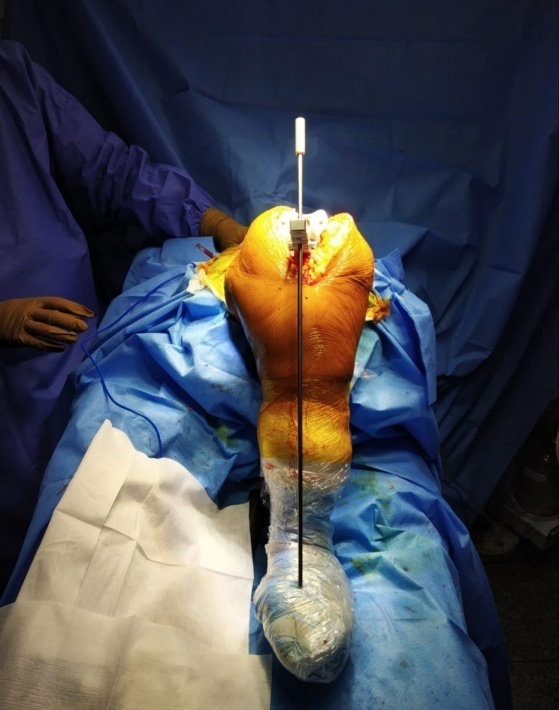 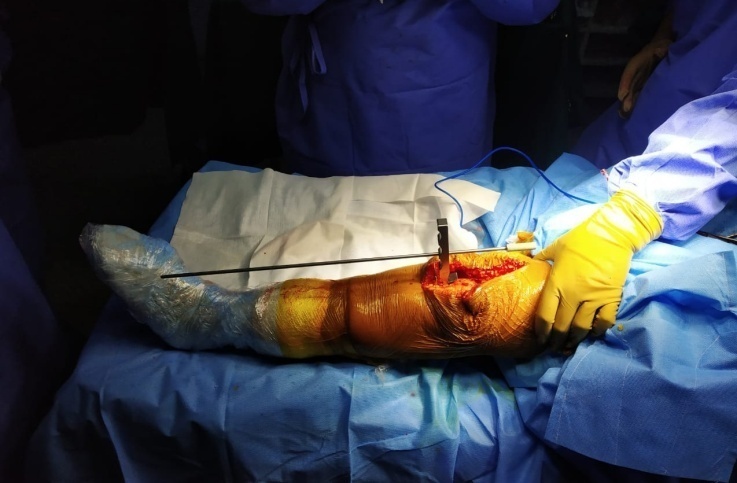 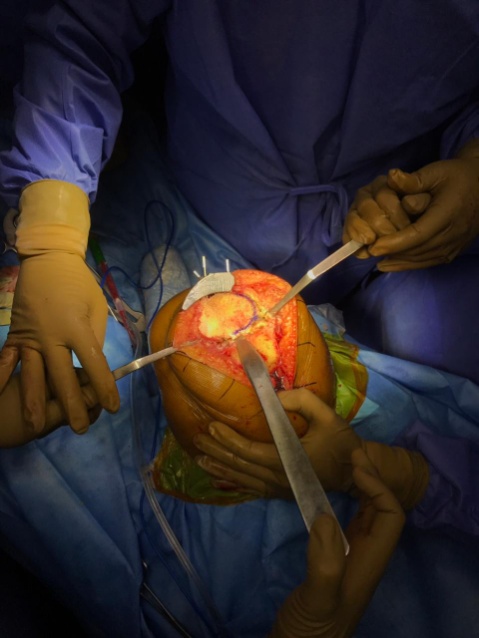 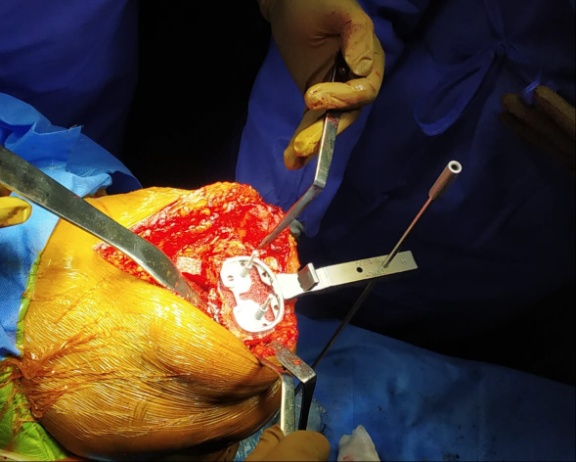 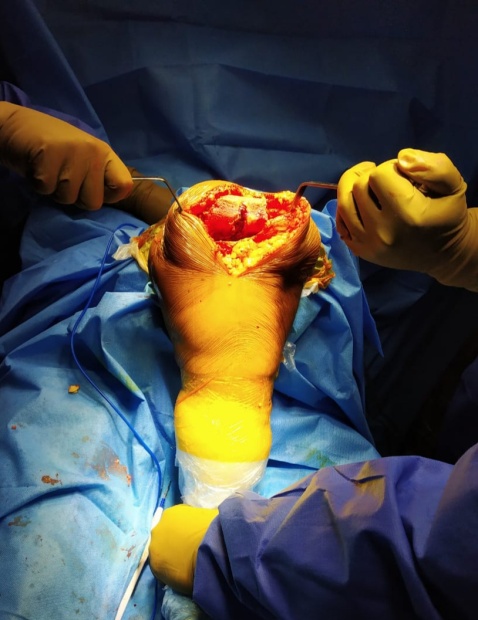 In a case of extreme patellar maltracking problem lateral retinacular release done with outside in technique. 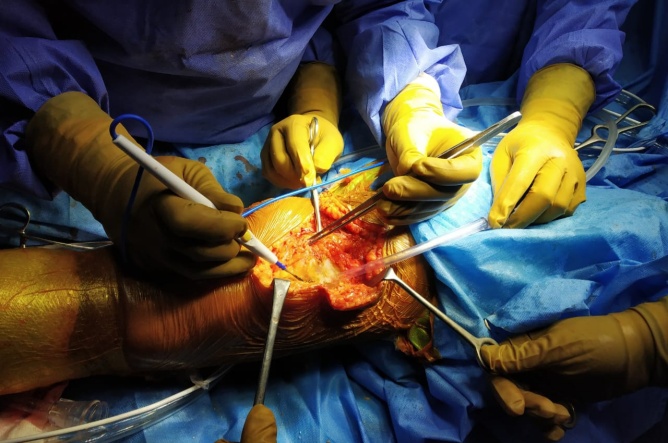 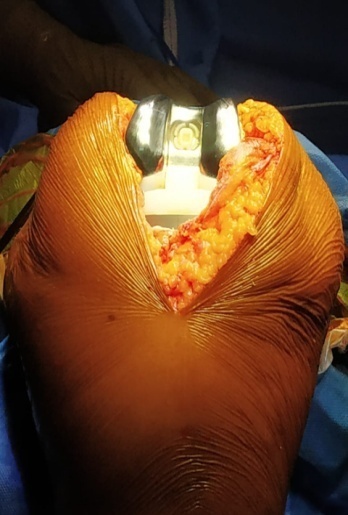 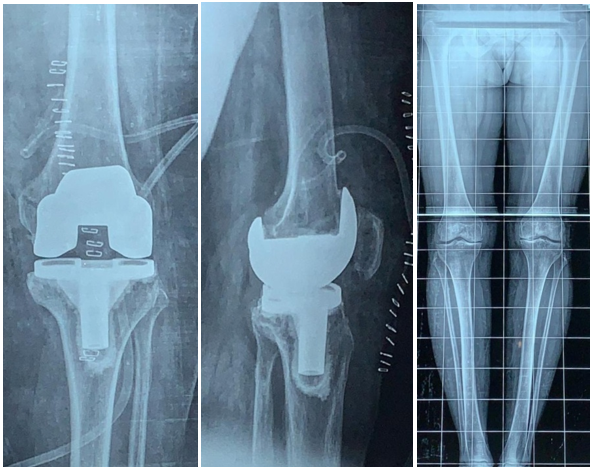 We have found negative correlation with Anxious patients, Female patient, >65 years of age & tobacco for the success of TKR. Anxiety especially with the increasing age for dependency could be the major factor for fair to poor results. For male preponderance & <65 years aged patients we found great results especially. Study done by D. Dennis et al. showed gap balancing better than measured resection technique. Recently navigation & robotics arthroplasty showed improved results but the navigation & robotics knee replacement also showed increased operative time & learning curve with poor cost effectiveness. We have evaluated the results of TKR as a whole; rather than focused as an alignment we have an inference of a whole TKR surgery with alignment one of the major result driven factor. We studied the success of TKR as a multifactorial with soft tissue balance & measured resection in a gradual manner. Soft tissue balancing, measured resection, component placement, cementing technique, duration of surgery, tourniquet time, patellar handling, postoperative paincontrol, patient motivation & counseling, rehabilitation, infection control, soft tissue handling & surgeon experience all are importantly decides the longetivity & results of knee arthroplasty.

The clinical success of Total knee arthroplasty lies on pain free kinematics for maximum longer duration. Surgeon satisfaction & patient satisfaction factors are different variables for counting the success of TKR. Proper component resurfacing of distal femoral arthritic surface & tibial base plate measured resection are crucial bony factors for component implanting. Soft tissue balancing is the most crucial surgical expertise needed for successful outcome of TKR. Our study has not included the implant design related factors as all the patients were implanted same designs of implants it has been counted as a technique oriented inferences. Still we understood that knee cosidering dynamic component of lowerlimb as a most aggressive machine of human body is a example of perfect bony musculoskeletol integrity. Longetivity of implanted components & resurfaced knee lies on many other patient related factors as discussed. Our technique’s results are quite satisfactory but long years multicentric trials warranted in this scenario of increasing total knee arthroplasty in a polite, discipline, cost effective & rationale manner.

Thanks to all my respected teachers to teach art of knee arthroplasty & beloved team members of my joint reconstruction surgery unit.