Das and Mishra: Case report of a Tillaux Chaput fracture in an adult having Becker muscular dystrophy with fracture of medial and posterior malleloli

Tillaux fractures are the avulsion of the distal tibial physis caused by the stress placed on the anterior tibio-fibular ligament, which are very rare in case of an adult. Due to severe swelling and overlapping of bones they are often missed in an innocuous looking X ray. Our case includes a 40 year old presented with severe pain and swelling of the ankle joint following trauma on a background history of Becker’s muscular dystrophy .While, the patient had proximal muscle weakness in lower limbs due to the comorbidity, Investigations also revealed the tillaux fracture with fractures of posterior and medial malleolus, which roughly outlines the injury mechanism to be of Supination-external rotation type. The objective of this publication is to highlight this unusual injury, to avoid incorrect diagnosis and its management which focuses on different challenges in achieving absolute reduction with early rehabilitation of the patient keeping in view of the existing co-morbidity.

Tillaux fracture are the injuries occurring in older adolescents, but extremely rare in adults. By approximately between the age of 12-14 year, the distal tibial epiphysis starts closing from center to medial, with the anterolateral side of the distal tibial physis closing last, which makes the antero-lateral portion susceptible to avulsions.1 Tillaux in 18482 first described it in juvenile group, hence such kind of physeal avulsion fractures which classically described as Salter harris type III fractures, in literature are also known as Tillaux fractures. Chaput first described this fracture in adults.3 The present report consists of a skeletally mature adults of age 40 with a known comorbidity of Becker muscular dystrophy(BMD) suffering from Tillaux Chaput fracture with posterior and medial malleolli involvement, in a population in which this fracture pattern to our knowledge and after review of the published data has not been described. 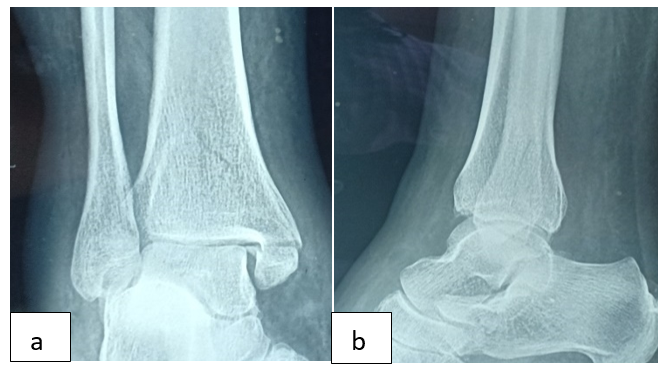 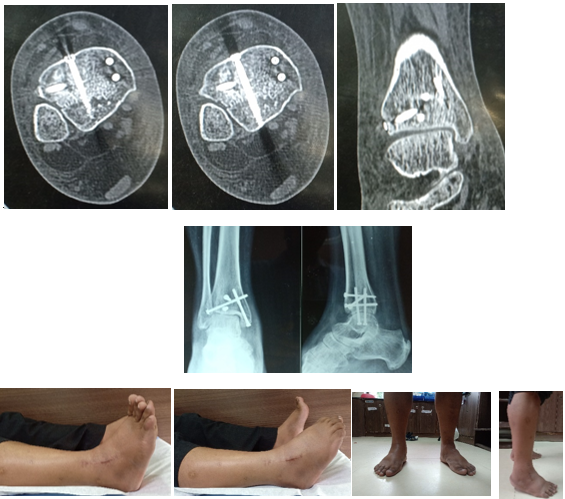 A 40-year old male patient was admitted in our hospital with complaints of pain and swelling of right ankle joint and unable to bear weight on it following an alleged history of trauma due to domestic fall sustaining injury to right lower limb. He is a known case of Becker muscular dystrophy who has symptoms of weakness in lower limbs with more proximal muscle involvement and was under treatment for the same since childhood. On clinical examination, he had developed severe swelling with tenderness over both medial malleolus and Antero Tibio-Fibular Ligament (ATFL) region. He had also gross restriction of range of motion with palpable distal pulse. On plane X-rays [Figure 1], the medial joint space appear widened suggesting medial malleolus fracture and there was also distal tibio-fibular syndesmotic diastasis. However, on CT-scan [Figure 2], the transverse section of right ankle joint revealed to have Tillaux fracture with articular step of more than 2mm with a minimally displaced posterior malleolus fracture of more than 25% of intra-articular involvement and a transverse, displaced medial malleolus fracture of distal tibia. The real challenge of the treatment was the choice of anesthesia in BMD patients as they have high prevalence of cardiac comorbidity, while the aim of the treatment was to achieve anatomic reduction with absolute stability and early rehabilitation to avoid further stiffness of the muscles.

After clearance from cardiologists and as skin condition improved with subsidence of swelling, surgical intervention was done under general anesthesia with care to avoid any type of inhalational anesthetic drugs. Under tourniquet control and fluoroscopy guidance to start with antero-lateral approach was first done to address the Tillaux fragment and open reduction and internal fixation(ORIF) was done with help of one 4.5 mm partially threaded cannulated cancellous(CC) screw with a washer [Figure 3]. With the same approach, fixation of posterior malleolus was done with two screws (both partially threaded CC screw and cortical screw) applied antero-posteriorly of appropriate size and length. The medial malleolus fracture was approached medially with separate incision and ORIF done with help two screws distal to proximal in lag mode. Alignment was checked under fluoroscopy control. The limb was kept immobilized with a below knee posterior slab in plantegrade mode for 2 weeks post-operative period. Passive range of motion exercise was initiated following the removal of stiches that is after second week. Gradual weight bearing with toe touch stared after three month of exercises. Patient had been followed up after second week, sixth week, third months & sixth months of post-operative period. On three months follow up complete union of the fracture was noticed radiologically with a painless stable joint. The range of motion was 25o in plantar flexion and 10o in dorsiflexion with 15o inversion and 10o eversion, which are comparable to contralateral ankle joint [Figure 4]. Patient returned to his premorbid condition & joined his routine duty from third post-operative month onwards. The only complaint of the treatment was weight gain of the patient which might be due to the prolonged period of rest.

Though Tillaux fractures are seen commonly in adolescents but may occur in adults also, and must not be missed. In this group these are known as Tillaux-Chaput fracture. In adults, the ligament usually gives way before avulsion of its attachment to the antero-lateral tibial plafond occurs, leading to relative rarity of this avulsion fracture injury pattern. Ankle injuries leading to tillaux fracture are mostly due to combination of different mechanism of injury such as external rotation, abduction or supination with different severity of force exerted. Its association with other injuries usually does not change the therapeutic approach yet very rarely reported in any literature. Joint surface displacement greater than 2 mm in CT scan should be viewed as an absolute indication for operative treatment.4 Though isolated biplannar tillaux fractures can be managed conservatively but triplannar tillaux fractures should always be fixed.5 However, the prognosis is good if adequate anatomical reduction is achieved. Complications like pain, stiffness and secondary osteoarthritis have been reported in patients having articular incongruity of ankle joint. Meanwhile, association of neuro-muscular disorders to such conditions makes the situation more cumbersome as the chances development of stiffness increases to many folds. Early rehabilitation and returning back daily routine activity is utmost important in cases of Becker muscular dystophy. As in our case the patient put on some weight due to prolonged rest, which seems to be of another kind of complication in treatment of such group of patients.

In conclusions, adult Tillaux Chaput fractures are though rare but can be diagnosed with thorough clinical examination, radiological investigations and most importantly CT scan should always be done, if there any doubt of syndesmotic diastasis. Meticulous planning with correct combination of approach is always essential especially when it is associated with other fractures. Understanding of mechanism of injury make the open reduction more convenient and internal fixation starting from the avulsed out tillaux fragment (ATFL) however makes the further surgical intervention easier. Early passive range of motion exercises should always be preferred as soon as surgical wound heals, but weight bearing should always be advocated once the joint become painless and stable with signs of radiological union is noticed.