Background: Although total knee arthroplasty (TKA) is one of the most successful operations in orthopaedic surgery, still approximately 20% of these patients have chronic unexplained pain which affect their life’s quality and post-operative expectations. The New Jersey low contact stress (LCS) knee system (LCS; DePuy Orthopaedics Inc., Warsaw, IN, USA) is one of the most effective knee designs with a well-known long track record. The surgical technique used is a gap balance technique which references the femoral component rotation to a well-designed tibial cut while maintaining soft tissue balance via appropriate tensioning of collateral ligaments. Aim of this study is to look at any relationship between tibial cut coronal orientation on x-rays and patients satisfaction in relation to pain and function using the validated Oxford Knee Score (OKS).

Methods: A single surgeon’s TKA cohort using the LCS system was retrospectively evaluated from March 2017 to March 2020. We identified two cohorts of patients, one with a tibial cut angle on x-rays ≤ 3° (59TKAs), and the other cohort with a tibial cut angle> 3° (41 TKAs). They received LCS TKA for right or left knee symptomatic end stage arthritis. We measured the tibial cut angle on antero-posterior (AP) x-rays and we obtained updated OKS by discussion over telephone (due to COVID-19 restrictions) with patients. We analysed our data for the two patient cohorts to look for any statistically significant functional difference.

Total knee arthroplasty (TKA) is one of most effective and successful operations in orthopedic surgery.1, 2 It is a common procedure for elderly patients with end stage symptomatic osteoarthritis. Number of patients receiving TKA is increasing every year in developed countries.3 However, still approximately 20% of these patients have chronic unexplained pain which affect their life’s quality and post-operative expectations.4, 5 The main surgical techniques described in the literature for performing TKA are measured resection and gap balancing.6, 7

In measured resection the femoral component rotation is referenced 3° externally rotated to posterior condylar axis in most of knee design systems, which is parallel to trans-epicondylar axis (TEA) and perpendicular to Whiteside’s line. These are fixed anatomical landmarks regardless of ligament tension or the tibial cut.8

In gap balancing technique, the femoral component rotation is only referenced to tibial cut after balancing collateral ligaments in rectangular flexion gap. This was first described by Insall et al. in 1976.9 Tight ligaments are released in extension, then in 90° flexion a spacer block or tensioner is used to achieve a parallel antero-posterior femoral cut jig with an already established tibial cut.

In mechanically aligned knee, the tibial cut surface is parallel to TEA if it is in 90° alignment with the tibial mechanical/anatomical axis. Any varus or valgus mal-alignment of the tibial cut in the coronal plane can change rotation of femoral component and has an effect on patellar tracking.10 (Figure 1). Also, rotational stress of femoral component can cause early wear and loosening of tibial side.11 As the functional results of mechanically alighned total knee replacement has plateaued, most of authors now stress the importance of proper surgical technique.12 From kinematic point of view it is not recommended to place the tibia cut in an angle more than 2 to 3° of varus. 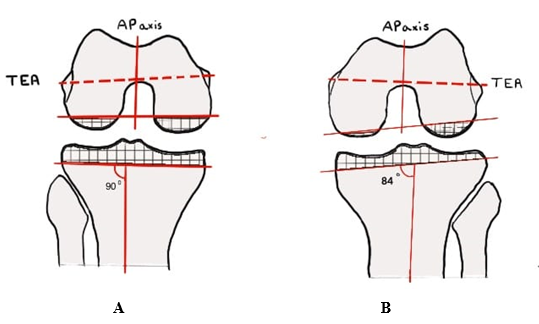 The New Jersey LCS knee system (LCS; DePuy Orthopaedics Inc., Warsaw, IN, USA) is one of most successful knee designs with well-known long track record.13 It is a mobile bearing knee with high conformity of the articulating surfaces which enables better distribution of load stresses. Its philosophy depends on the gap balancing technique to achieve a well-balanced rectangular space in both extension and flexion gaps. Some authors have raised concerns of effect of ligament laxity8 and varus or valgus tibial resection14 on femoral component rotation in gap balanced knees. In the gap balancing technique, a tibial cut in the range of 87° to 93° is not only associated with better results,15, 16 but also better alignment of femoral component rotation and subsequently patellar tracking.

We designed our study to investigate the hypothesis that tibial cut angle on postoperative and follow-up x-rays > 3 degrees varus malalignment can lead to poor functional results and patient’s dissatisfaction. We measured the tibial cut angles on antero-posterior (AP) x-rays for 100 patients who received LCS knee repalcement from March 2017 to March 2020 in our institution. We contacted all patients over telephone (due COVID-19 restrictions) for OKS questionnaire.

This is a single-center retrospective comparison study. We reviewed x-rays of 126 LCS TKAs available on our radiology system for cases done in the time period from March 2017 to March 2020. We retrospectively identified two cohorts of patients: 59 patients with tibial cut angle ≤ 3° were considered as the control cohort, and 41 patients with tibial cut angle > 3° who were considered the cases. 26 patients were excluded as they did not answer our telephone calls after trying multiple times over different days, their x-rays were not adequate enough for proper measurements, or they have other factors contributing to their knee symptoms. All cases were performed by the senior author who has significant experience with the gap balance technique using the LCS TKA system. Inclusion criteria were all cases who received TKA as primary treatment to advanced knee arthritis during this time period. Exclusion criteria was any previous knee osteotomies or arthroplasties which can have effect on preoperative alignment. The medial parapatellar approach was used for all of our patients including those with preoperative valgus knee deformity. Tibial resection level and multiplanar alignment are adjusted using an extramedullary guide.

Varus/valgus and rotational alignments are referenced off the second toe and the centre of the ankle at the tibialis anterior tendon. We cover the lower leg and foot with iodine impregnated incisional drape for better identification of anatomical landmarks. We balance the flexion gap first until AP femoral cutting block is parallel to the resected proximal tibial surface and then perform anterior /posterior condylar cuts, this is followed by extension gap matching with gap balance in flexion and finally we perform the distal femoral cut. We did not resurface the patella in any of our cases.

We measured the tibial cut angle on coronal view using the routine postoperative and follow up x-rays, and we identified this angle as the intersection between two lines: line of mechanical axis of tibia and line representing the undersurface of metal tibial tray (Figure 2). We did not use a full limb radiograph as it is not routinely done postoperatively, our study is retrospective and some studies have confirmed the reliability of the AP view of the knee for assessing the mechanical alignment post TKA with comparable results and reproducibility similar to those obtained from full-limb x-rays.17, 18 It is cost effective with less radiation exposure. 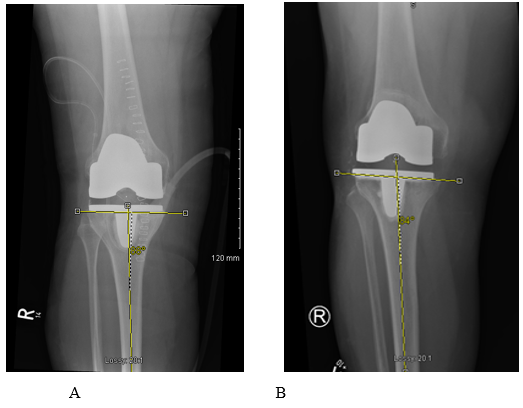 The patients with x-rays showing tibial cut angle > 3° were considered the study group, and we presumed that they have femoral component malrotation and patellar maltracking with less functional scores compared to the control group. We obtained updated OKS by discussion over telephone with patients. We analysed our data for the two groups to look for any significant difference. The primary outcome measure was OKS at > 6 months from time of primary surgery.

The histograms and tests of normality (Table 2) show that the OKS is not normally distributed, so a non-parametric test had to be used to test if there is a statistically significant difference in OKS between the ≤ 3°group (controls) and the >3° group(cases).

The boxplot shows that generally, the OKS is higher for patients in the ≤ 3°group. There is also less variability in the OKS values in this group (Table 3). Females are showing more variability and scoring less (Table 5). Non-normal variables were compared using Mann-Whitney test (Table 3, Table 4, Table 5). A p-value less than 0.04 was considered statistically significant.

If we run the Mann-Whitney test separately for males and females we get the following (Table 7, Table 8).

Gap balancing TKAs are stable well balanced knees with successful reproducible results in the literature. Few authors have raised their concerns on effect of varus/valgus orientation of tibial cut on femoral component rotation and patellar tracking.8, 14 No studies, to our knowledge, have proved any clinical relevance of this.

There is lack of agreement on the confirmed relationship between femoral component malrotation and patellar maltracking.19 Our study has shown that there might be indirect effect of varus tibial cut on postoperative knee function by malpositioning femoral component in internal rotation with its proposed effect on patellar tracking and poor knee function. This causal relationship needs to be further confirmed by higher evidence large studies.

We used the OKS to assess function and pain post LCS TKR. It is a subjective 12 question score.20 A total score 60 is possible with 5 answers for every question. The lower the score the worse the patient’s symptoms are. It is simple and reproducible score which is routinely done pre and post operatively for most of patients who receive knee replacements in our hospital. It has been validated in numerous studies.21, 22 However, we could not assess range of knee motion at the time of questionnaire as this question is not included in the score and all answers were collected virtually over telephone.

Unfortunately, most of our patients did not try to kneel or find it very difficult to do that after their knee surgery. That can be explained by the fact that most of our patients have average age around 70 and kneeling was not essential movement or required position in their daily life. Consequently, most of our patients who were satisfied with their knees could not achieve score above 55 to 56 although their knees were functioning well with complete relief of night and mechanical pains. Also, some of our patients were referring their limited mobility and functional pain to other associated contralateral knee symptoms or back and hip pathologies, they were excluded from our study if they could not describe well the symptoms related to the operated knee.

Most of the cases were in neutral or has slight varus cut. Only 2 cases had a 2 degree valgus tibial cut, which is still within neutral range (90°+/-3°). We were not sure how this would occur but it may be because most of the arthritic knees had pre-operative varus orientation of the tibial surface. Therefore, preoperative malalignment of arthritic knee might have effect on tibial cut intraoperatively, even with well aligned extramedullary rod.

As still using extra or intra medullary systems for adjusting tibial resection coronal alignment and rotation depends mainly on surgeon’s intraoperative assessment and anatomical landmarks, malalignment mistakes are unavoidable. Use of intraoperative fluoroscopy has shown to lower the risk of malalignment and can be a good tool in gap balancing technique, but it prolongs operative time.22

There are some limitations in our study. There are no in vitro mechanical studies or postoperative radiological images like CT or MRI that can confirm our hypothesis. TKA patients have a large variability in ligamentous stability leading to large variability in femoral component rotation when the balanced gap technique is used, and not all patients have the targeted rectangular flexion gap as intraoperative assessment of stability depends on surgeon’s experience and preferences and degree of preoperative deformity.

Postoperative pain after TKA is multifactorial which can include external factors like spine pathology, hip arthritis and contralateral knee arthritis, or internal factors related to the TKA itself, like overstuffing of patella, ligament balancing, flexion and mid-flexion instability, dormant infection or any other causes of chronic knee pain.

The authors declare that they have no competing interests.

We wish to thank Mohamed Saeed and Stephen Fahy for valuable contributions.

RS Hinman RL May KM Crossley Is there an alternative to the full-leg radiograph for determining knee joint alignment in osteoarthritis?Arthritis Rheum2006553061310.1002/art.21836