Is congenital isolated club foot heritable? A study from India

Background: Club foot is a very common and serious birth defect affecting one of every 1000 live births. Substantial progress has been achieved in the management and diagnosis of limb defects; however, not much is known about the genetic basis underlying talipes equino varus disorder. This study was undertaken to find out the prevalence of single nucleotide polymorphisms in PITX1 gene that are associated with isolated clubfoot babies in Indian population.

Materials and Methods: The study was done at Institute of Orthopaedics and Traumatology (IOT), Multidisciplinary Research Unit (MRU) Coimbatore Medical College and Hospital during the period of December 2019 to June 2020 after ethical committee clearance. Fifty isolated clubfoot babies were included in the study group of which 32 were male and 18 were female.23 babies had bilateral club foot, 18 had right sided and 9 had left sided club foot.

Conclusion: A larger multicenteric study should be conducted in other regions of India to prepare more specific gene to be associated with club foot. We hope this study will encourage future studies and aid in improving the genetic knowledge of club foot in India.

Congenital talipes equino varus also known as clubfoot is a very common and serious birth defect affecting one of every 1000 live births.1 Clubfoot is characterized by structural changes of several tissues of the foot and lower leg, which leads to abnormal positioning of foot and ankle joints.2 If left untreated, it can become a severe disability and deformity.3 Club foot deformity is the most common congenital problem leading to locomotor disability in developing countries. Approximately 80% of clubfoot cases are isolated birth defects, having an idiopathic aetiology.4 The remaining 20% of cases are due to associated malformations, chromosomal abnormalities and known genetic syndromes such as distal arthrogryposis (DA) and neural tube defects.5 Substantial progress has been achieved in the management and diagnosis of limb defects. Previously it was thought that club foot is due to abnormal positioning of the baby in-utero. Later it became evident that various genetic and environmental factors play a major role in the etiopathogenesis of club foot. However, not much is known about the genetic basis underlying talipes equino varus disorder. There is strong evidence for a genetic basis for isolated clubfoot. The homeostasis and development of the limb depends on the complex interactions between the lateral plate mesoderm cells and outer ectoderm. These complex interactions include HOX signaling and PITX1-TBX4 pathways.

With advances of science, genetics study is also advancing all around globe.

Limb bud initiation in the embryo involves expression of Homeobox (Hox) genes in primitive paraxial mesoderm cells under the influence of fibroblast growth factor (FGF) signaling.6, 7, 8 Although Hox expression is required for limb bud initiation no evidence exists for Hox genes involvement in determining antero-posterior polarity of the hindlimbs. The upper and lower limb identities get established very early. During early embryogenesis, lateral plate mesoderm cells give rise to the limb cartilage, bone, tendon and muscle connective tissue. A small bud of undifferentiated mesoderm cells encased in ectoderm lead to the development of limbs.9 Onset of T-box transcription factor (Tbx4) expression determines the lower limb formation from the lateral plate mesoderm.10 Expression of Tbx4 in the hindlimb forming area is regulated by the homeodomain containing transcription factor PITX1.11, 12

PITX1 is expressed in the lateral plate mesoderm in the posterior region of the body and is a major determining factor in hindlimb identity.13 This is supported by the fact that deletion of the PITX1 locus results in reduced distal expression of the hindlimb-specific marker, the T-box transcription factor Tbx4.14

It is noteworthy that the genes mentioned above are preferentially expressed in the hindlimb of mice and not in the forelimb.15

Though, the mechanisms underlying Talipes Equino Varus have not been elucidated yet. Imaging studies, in clubfoot patients having PITX1 mutations/TBX4 genetic defects and PITX1 haplo-insufficient clubfoot mice, show muscular and vascular anomalies. This suggests that defects in the PITX1-TBX4 pathway give rise to a developmental field defect, in which altered early limb growth results in abnormalities of all derived tissues, including vasculature, muscle and bone.

This study was undertaken to find out the prevalence of single nucleotide polymorphisms in PITX1 gene that are associated with isolated clubfoot babies in Indian population who are diagnosed clinically with isolated club foot.

The study was done at the Institute of Orthopaedics and Traumatology (IOT), Coimbatore Medical College and Hospital along with the Multidisciplinary Research Unit (MRU) available in Coimbatore Medical College after ethical committee clearance. The study was undertaken during the period of December 2019 to June 2020. Fifty isolated clubfoot babies were included in the study group of which 32 were males and 18 were females. Of fifty isolated club foot babies 23 babies had bilateral club foot, 18 had right sided and 9 had left sided club foot. Club foot babies with other associated syndromes and other deformities are excluded from the study group. A request for biological specimens were collected from the respondents after completion of consent forms and counselling to parents.

Blood samples were collected from babies diagnosed with isolated club foot in EDTA coated tubes and stored at -20˚C. DNA was isolated from blood sample using QiagenDNEasy DNA isolation kit. It was confirmed to be DNA by electrophoresis (Figure 2).

Confirmation of DNA by electrophoresis 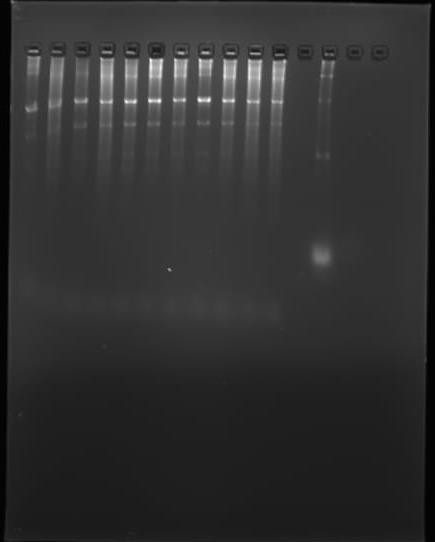 DNA was isolated in all 50 babies. After isolation of DNA, the DNA was quantified and stored at -80˚C until further use. The suitable primers for PITX1 gene were designed with the help of bioinformatics websites.

The primers used were (Figure 3)

Primers used for amplification of gene of interest 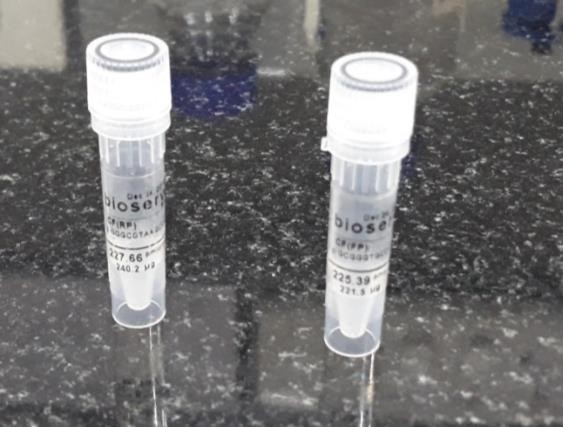 Adding these primers to the DNA samples along with appropriate buffer solutions and Taq Polymerase enzyme, the gene of interest was amplified through Polymerase Chain Reaction (PCR). The amplified product was run in agarose gel electrophoresis to confirm the amplification of gene of interest.

The Polymorphism were genotyped through Polymerase Chain Reaction (PCR) followed by Restriction Fragment Length Polymorphism (RFLP). Using BccI enzyme the PCR product will then be subjected to enzymatic restriction. Electrophoresis on 10% polyacrylamide gel stained with silver nitrate can be used to visualize both PCR amplified and enzyme cleaved fragments (Figure 4). After confirming the amplification, the amplified product was sequenced to predict the mutation. The DNA sequence isolated from patient sample was compared with the normal reference sequence. The reference sequence was obtained from genome databank of National Centre for Biotechnology Information (NCBI).

After analyzing 50 cases with isolated club foot for single nucleotide polymorphism in PITX1 gene. Twenty seven different types of Single Nucleotide Polymorphic mutations have been detected. Of all these mutations detected some of them have been found to occur significantly in greater number of patients (Figure 5). 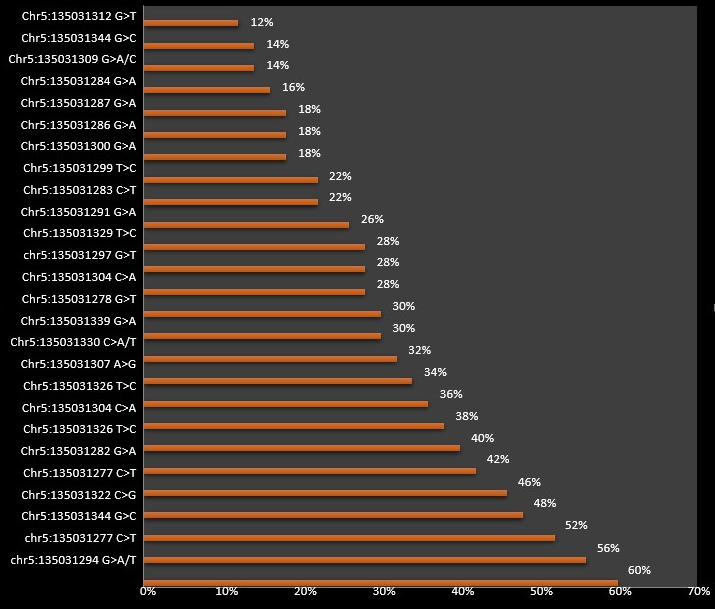 Mc Nemar test and Odds ratio are used to analyse the statistical significance of association of these two mutations which are not yet reported in isolated club foot. Mc Nemar test is used to test the difference between paired proportions where patients serve as both control and experiment. In this study, the mutation Chr5:135031290 C>T mutation which is already reported as pathogenic for club foot is taken as control. This mutation is referred to as M1. The two unreported mutations Chr5:135031344 G>C and Chr5:135031277 C>T are taken as experiments and are referred to as M2 and M3 respectively. On comparing M1 and M2 mutations McNemar’s test showed difference in proportion was 16.00% with 95% CI from -4.29% to 31.8% and the probability (P) value greater than 0.05. Therefore the presence of proportions of M1 and M2 mutation are not significant. On comparison of odds ratio of M1 and M2 mutations the odds are 0.56 and 1.08 respectively. The odds ratio which is the proportion of the odds of M1 mutation to M2 mutation is 1.9259. This indicates that the Chr5:135031344 G>C (M2) mutation type is 1.26 times more likely to happen in isolated club foot when compared to Chr5:135031290 C>T mutation(M1)group. However, the z-statistics which tested the odds ratio is 1.604 which is not significant as the probability is greater than 0.05 (P=0.1087). Therefore both McNemar’s test and Odds ratio suggests that the Chr5:135031344 G>C (M2) mutation is not significantly associated with isolated club foot.

Both McNemar’s test and Odds ratio suggests that the Chr5:135031277 C>T (M3) mutation is significantly associated with isolated club foot.

From the above statistical data it is clear that Chr5:135031277 C>T mutation of PITX1 gene is more likely to be associated with isolated club foot.

In developing countries children with club foot, if left untreated have difficulty in leading a normal life and become dependent on others for carrying out their daily activities. They have difficulty in squatting which is a common position used for daily activities like toileting and farming. Social stigmata is also an important factor in developing countries and girls experience difficulty in getting married. To overcome these problems early diagnosis and appropriate treatment is essential in congenital talipes equino varus.

Approximately 25% of all isolated cases report a familial history of clubfoot. Data from studies on twin babies show a higher concordance in monozygotic (33%) than dizygotic (3%) twins and more recent data estimates heritability of isolated clubfoot at around 30%. In addition, prevalence of clubfoot varies across ethnic populations, from 0.39 cases per 1000 births in Chinese populations to seven cases per 1000 births in Hawaiians and Maoris suggesting genetic cause. Further, the ratio of isolated clubfoot among males and females is 2:1 and this ratio is consistent across ethnic groups.

A missense mutation in PITX1 (MIM 602149), revealed a single missense nucleotide change c.388G/A that results in the substitution of lysine for glutamic acid (E130K) in the highly conserved homeodomain, was identified to play an important role in pathogenesis of isolated club foot. Since the PITX1 gene is expressed predominantly in the hindlimb and not the forelimb, this is the first gene implicated in clubfoot to explain the specific involvement of the foot.

E.A Gurnette et al. in their study have compared the prevalence of club foot in five generational family with asymmetric idiopathic club foot and reported that club foot as an autosomal dominant condition with incomplete penetrance.16 According to a study conducted by D. Alvorado et al. 25% of the idiopathic clubfoot cases have a familial history.17 They identified a mutation in bicoid related homeodomain transcription factor gene PITX1, in a multigenerational family with predominantly isolated clubfoot.

Our study reveals the importance of establishing genetic basis of isolated club foot in this modern era of science. A larger multicenteric study should be conducted in other regions of India to prepare more specific gene to be associated with club foot. We hope this study will encourage future studies and aid in improving the genetic knowledge of club foot in India.

On behalf of all authors the corresponding author states that there is no conflict of interest.