Wound infection is commonest problem encountered in orthopaedic practice may be due to compound wounds or infection of surgical wound in post operative period. The wound infection is ubiquitous in hospital environment and is a real challenge to treat. The most common pathogen is Pseudomonas aeruginosa involving skin and subcutaneous tissue. Though Staphylococcus Aereus Staph epidermidis are also secondary microorganisms found. Many wound care methods and local disinfectants solutions antibiotics are been used in practice for wound care and its early healing. Inspite of availability of all antimicrobial agents, it is difficult to treat wound infection. In our present study an attempt was made to assess the results of local use of Vinegar (acetic acid) in treating infected wounds, which is economical and easily available for infected wound care.

Materials and Methods: A prospective study was done in orthopaedic infected wounds which were not responding to traditional wound care. The infected wounds included in our study were compound fracture wounds and infected surgical wounds. The infected wounds were dressed up with local soaked gauge piece in acetic acid or local infiltration at wound edges with proper debridement.

Results: Culture sensitivity of discharge from wounds revealed pseudomonas aeruginosa and were resistant to almost all available antibiotics used in our Government hospital. These wounds responded dramatically with use of acetic acid locally. Their hospital stay was reduced.

Wound infections are commonly encountered in our day to day orthopaedic practice. It can be a sequele to compound fractures or post operative surgical incisional wound infection. Pseudomonas aeruginosa was common opportunistic pathogen found commonly on culture and resistant to majority of antibiotics used routinely. It is also one of the important cause of nosocomial hospital acquired infection. Recently increased frequency of resistant strains because of its ability to survive in hospital environment and ability to develop resistance have been reported. 1 Pseudomonas is difficult nosocomial pathogen to eliminate from infection site. The resistant strains and incidence of multiple drug resistant strains are difficult to treat and eradicate. It is also resistant to many of commonly used disinfectants antiseptics.

To study the usefulness of vinegar Acetic acid and its effectiveness in infected orthopaedic wound management.

A prospective study was conducted on 14 cases of orthopaedic infected wounds from November 2019 to December 2020 to study the effectiveness of using local vinegar acetic acid on infected wounds.

According to our antibiotic protocols we administered three days of parenteral antibiotics followed by oral antibiotics for five days. Incisional wounds were inspected on 2nd 5th 7th day and suture were removed on 10 to 12th day. Antibiotics used were ceftriaxone Cefotaxime and cefuroxime.

All compound lacerated wounds were primarily debrided with copious normal saline hydrogen peroxide all visible dirt and contamination grit were removed. The skin edges were debrided and sutured which were suturable. And those lacerated compound wounds which were non suturable, edges were debrided and approximated loosely to allow wound healing secondarily with traditional dressings. Cultures sensitivity of infected wounds was sent on slightest suspicion of infection. We selected those cases which were not responding to regular dressings and culture sensitivity test revealed pseudomonas infection not responding to any antibiotics or the antibiotics were costly which patients could not afford to buy costly sensitive effective antibiotic.

Actual dressing procedure: the infected wound was dressed under all aseptic precautions. A) the wound wash was given and cleansed with copious normal saline hydrogen peroxide irrigation. B) all necrotic tissue and slough and unhealthy tissue was excised C) Sterile guage soaked in 5% acetic acid was placed over wound and additional dry pads were placed and pressure bandage was applied. This dressing was continued daily or on alternate days as per condition of wound healing. Affected limb was kept in elevated position to enhance subsidence of oedema. Wound healing was recorded and documented in pictorial format for study.

Incisional wounds healed well sooner at 10- 18 days, but compound wounds took longer time about 3 -4 weeks. Daily dressings were done. The compound wounds which were debrided and approximated with loose sutures were injected at edges to enhance healing. The wound was dressed inspected regularly and condition of infected wound assessed by its reduced inflammatory response subsiding oedema of skin edges epithelisation and decreasing size of wound. Some large compound wound in our study needed plastic surgery for skin and soft tissue cover. The smaller wounds healed well with granulation tissue and epithelisation of edges without any secondary procedure. 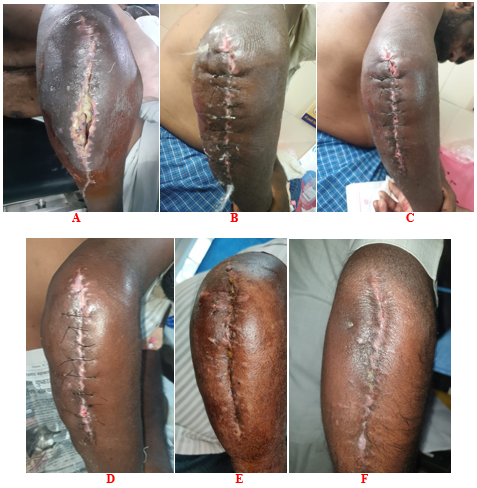 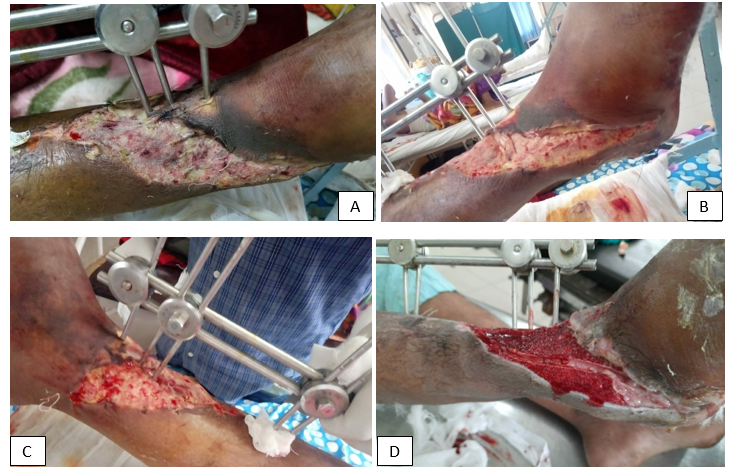 Case 3: A: Eschar on posterior aspect of arm; B: After debridement and starting local vinegar; C: Granulation of open wound and size of wound decreased at 18 days with local vinegar dressings

Case 4: A: On admission wound on left foot; B: Primary debridement and suturing; C: at 7th day; D: Healing at 18th day 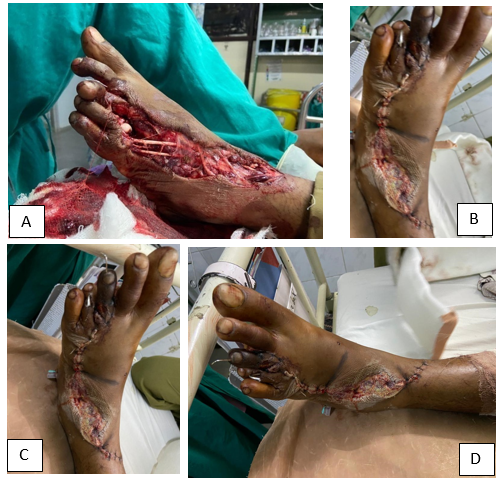 All these factors predispose for wound infection. Staphylococcus aureus Staph Epidermidis and MRSA are majority of bacteria those contaminate compound wounds and incisional wounds.2 Pseudomonas aeruginosa is classic opportunistic infection is most commonly encountered in orthopaedic practice and burns. Its resistant strains and resistance to various antibiotics disinfectants antiseptics poses a challenge for a treating orthopaedic surgeon. Orthopaedic surgeon stabilizes the fractured bone by fixing it using different implants and prosthesis. Infection of implanted bone is very difficult to treat, as it cannot be removed till the bone unites and infection persists till there is implant in the body. One has to be very careful to prevent infection and also be ready to treat the infection caused, Compound fractures and compound wounds and surgical incisional wound infections are commonly seen in orthopaedic practice. Of course mainstay treatment of infected wound is repeated debridement wound wash and aseptic wound care along with proper parenteral / oral/ local antibiotics depending on culture sensitivity. It is found pseudomonas are commonly cultured and are resistant to routine antibiotics. At times, they are sensitive to antibiotics which are costly and are not affordable to the patients.

There are many local disinfectants antiseptic agents used for infected wound care, but it is not without its side effects like skin irritation, skin discoloration, allergies, intolerance, toxicity etc.3, 4 To name few examples, antiseptic agents like hydrogen peroxide iodine and alcohol have cytotoxic effects. Hydrogen peroxide and disrupts new capillaries oxidizes wound debris and is toxic to fibroblasts. Dakins solution containing hypochlorite is also toxic to fibroblasts and slow down the epithelisation and retards collagen synthesis inhibits migration of neutrophils migration in wound bed.5, 6, 7 Betadine Povidone iodine commonly used antiseptic agent is broad spectrum antibacterial and anti fungal agent.8, 9 It impairs wound healing and reduces wound strength and deleterious effect on epithelisation when used in undiluted concentration. Silver sulfa diazine is toxic to fibroblasts and can have allergic reaction and transient leucopenia.10

Vinegar is an acidic liquid formed by oxidation of ethanol in alcohol containing liquid such as wine fermented fruit juice (cider) or beer. It has been used since ancient times as important cooking ingredient.13 The mechanism of action of acetic acid is concerned, it is suggested that acidification of a wound also increases the pO2 and reduces the histotoxicity of ammonia which may be present (ammonia being less toxic in an acidic environment). This acidification of a wound is, however, relatively short-lived and it has been found in one study that the wound does not maintain acidity for periods longer than about few hours and therefore soaks would require frequent replacement.7 In this study, we changed the acetic acid soaked gauze every six hours though some study have got excellent results with even single daily gauze replacement

Topical application or subcutaneous injection in local skin in concentration of 3-5% eliminated pseudomonas from burns and soft tissue wounds.4 Acetic acid acts against P aeruginosa by lowering the pH and thereby making an environment unsuitable for growth and multilicatin og P aeruginosa. It also confers other benefits on healing process as well as removal of bacteria. The effect on re epithelisation has found no negative impact on wound healing (Kjolseth et al. 1994)6, 14 Al-Ibran and Khan studied effect of 1% acetic acid in burn wounds with 90% success.13

Wounds are classified as either acute or chronic. Acute wounds heal in a predictable manner and time frame. Chronic wounds are defined as wounds that have failed to proceed through the orderly process that produces satisfactory anatomic and functional integrity or that have proceeded through the repair process without producing an adequate anatomic and functional result (Hopf et al., 2006). The incidence of wound infection is about 5% to 10% nationwide and has not changed during the last few decades (Arnold and Barbul, 2008).15, 1, 16 Pseudomonal infection in hospitalized patients has always been problem to the clinicians. Traditional therapies with antipseudomonal agents have their own limitations because of multiple antibiotic resistance in nosocomial strains of P. aeruginosa. The use of acetic acid has been reported from time to time as a topical agent for the treatment of pseudomonal infections and in most reports has been used for superficial infection (Nagoba et al., 1997).10 Dressings can be classified as primary or secondary. A primary dressing is placed directly on the wound and may provide absorption of fluids and prevent desiccation, infection, and adhesion of a secondary dressing. A secondary dressing is one that is placed on the primary dressing for further protection, absorption, compression, and occlusion. Many types of dressings exist and are designed to achieve certain clinically desired endpoints (Martinez-Zapata et al., 2012).17

A wound is said to be infected when the invading micro organisms cause notably impaired wound healing. When infectious bacteris are invading a host toxic substances are produced by microorganisms that cause damage to the host tissues. (Gjodsbol.et al. 2006) 1, 18, 11, 4

Administration of local vinegar in wound edges or locally vinegar soaked gauges over the wound in conjunction with parenteral antibiotics is attractive to orthopaedic surgeons seeking to reduce the incidence of skin and soft tissue infection. Vivek Patel and Vishal Pushkarna have shown the effectiveness of intra wound vancomycin to prevent surgical site infections. 2

Acetic acid was found to have bacteriostatic activity against Pseudomonas Aeruginosa. It is used in concentration of 1 to 5% to eradicate efficiently eradicate the Pseudomona Aeruginosa from infection site in superficial wounds. Acetic acid have advantage over costly antibiotics and local antiseptics and does not encourage evolution of multiple drug resistant strains in hospital environment. At times when bacterial resistance to antibiotics is a matter of concern, the value of topical agents such as acetic acid can be efficiently and effectively used in pseudomonal infected wound. Use of antiseptics at a concentration that is effective and well tolerated and discontinued as soon as clinical signs of infection disappear can be practiced safely.

Infection leads to complications which are incomparable in terms of financial burden quality of life functional outcome of any orthopaedic surgery.

This was an initial attempt to study in Government hospital with majority population of low socioeconomic status smoking alcoholism tobacco chewing males not affording costly higher antibiotics. The studies showed good encouraging and promising results and were cost effective. Multiple and more trials are required to assess good results.

HD Dakins The antiseptic action of hypochlorites: the ancient history of the new antisepticBr Med J1915280910