Materials and Methods: The fractures were classified according to BOYD and GRIFFIN classification system. 40 patients of intertrochanteric fractures fulfilling the inclusion and exclusion criteria, were managed surgically using Trochanteric Femoral Nail – Advanced. The results were analyzed according to age, type of fracture, operative details and functional outcome using KYLE’s criteria.

Results: Totally 40 patients with intertrochanteric fractures were operated with TFN-A and were included in the study. The mean age of the patients was around 74.97 years with minimum age being 54 years and the maximum being 92 years. The mean duration of operation was recorded to be 59.69 mins. Complications in this study were seen in 4 patients (10%). Complication was surgical site infection 2 patients (5%), helical blade back out 1 patient (2%), greater trochanteric fracture 1 patient (2%).

With ageing, intertrochanteric fractures are very common. These fractures occur as a result of osteoporosis and cause a significant impact on the activities of daily living of the patient.1 Intertrochanteric fractures constitute a major chunk of the orthopaedics surgical procedures and are considered to be a major reason for mortality. Literature states as high as 5% mortality at the end of 1 month and 15% at the end of 6 months after the surgery.1, 2 Hence, in these patients avoiding bed ridden complication by accelerating fracture union and supported mobilization becomes our main aim.

The surgical treatment of intertrochanteric fractures remains a matter of debate. The biomechanical advantages of intramedullary (IM) implants make Gamma nail (GN) and proximal femur nail (PFN) an attractive option, especially in unstable fractures.3 Initial reports have suggested that IM nails may have an advantage over side plate devices in unstable fractures but have not demonstrated a clear superiority and have a reported complication rate of around 20%.4 The incidence of neck screw cut out has reduced considerably with improvements in the surgical technique but still remains the most common mode of fixation failure with IM implants.5, 6

Trochanteric femur nail Advanced (TFN-A) is a new internal fixation system that was recently developed and is now applied widely in various intertrochanteric fractures.5 It is particularly suitable for old patients with osteoporotic and complex fractures because it involves minimal exposure and reduced perioperative blood loss and gives us a biological fixation. The major development in this process is the helical blade, which is supposed to compress the surrounding cancellous bone in the femoral neck and stabilize the head and neck fragment during insertion of the blade. The TFN-A has a small distal shaft diameter, resulting in a lower concentration of stress in the tip. The complication rate is quoted as being from 15% to 20%, with the most common mode of failure being screw or blade cut-out.7 In biomechanical studies, the spiral blade of the trochanteric femoral nail Advanced has shown a superior cut-out resistance, which may translate into fewer cut-outs in the clinical setting.8

With a level IV evidence, a prospective study was carried out from September 2016 and April 2018 in department of Orthopaedics, JSS Medical College & Hospital, Mysuru. A total of 40 patients with comminuted intertrochanteric fractures with TFN -A (Trochanteric Femoral Nailing - Advanced) in elderly patients and were followed up at the immediate post op period and at the end of 1st, 2nd, 3rd, and 6 months and evaluated for functional outcome using Kyle’s criteria.

TFN-A device is a stainless steel/titanium reconstruction nail. All the patients had implantation of 200 mm / 170 mm nail length measuring 9/10/11 mm in diameter and having a blade-nail angle of 130◦. The proximal nail angle in the coronal plane is 6◦ to match human anatomy. An aiming device is used to achieve distal locking by inserting a screw through a hole which can be used as static locking or dynamic locking depending on the fracture reduction. The cephalic end of the device is a helical blade whose shape precludes rotation once locking is achieved but allows back-out to obtain compression of the fracture site. 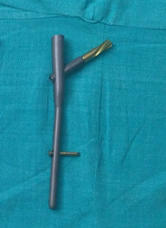 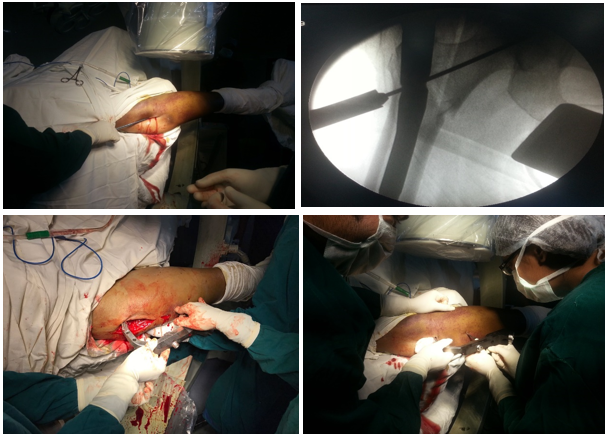 All patients were initiated with active and passive exercises within 48 hours of surgery. All the patients were advised to completely bear weight after 10 – 12 weeks of post operative period. All patients were followed up at the immediate post op period the end of 1st, 2nd, 3rd, and 6 months and evaluated for functional outcome using Kyle’s criteria. 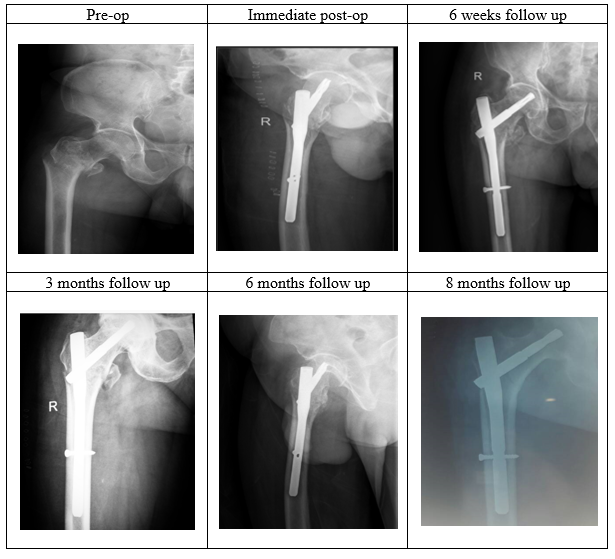 A total of 40 patients of comminuted intertrochanteric fractures underwent surgical management with TFN-A as per our study protocol. The descriptive statistics were reported as mean (SD) for continuous variables, frequencies (percentage) for categorical variables. Data were statistically evaluated with IBM SPSS Statistics for Windows, Version 24.0, IBM Corp, Chicago, IL.

According to Boyd and Griffin classification, the pattern of fractures were type 2 in 14 patients (35.00%), type 3 in 19 patients (47.50%) and type 4 in 7 patients (17.50%). Among 40 patients, 31 patients (77.50%) had closed reduction and 9 patients (22.50%) had open reduction and fixed with TFN-A. The mean duration of operation was recorded to be 59.69 min, which included the time from incision to suturing back the skin. We noted that the experience of the surgeon with the instrumentation, played a single major role in the reduction of the duration of the surgery. The mean radiological union of unstable intertrochanteric fractures were 12.98 ± 3.09 weeks.

Range of movements of intertrochanteric fracture fixed with TFN-A 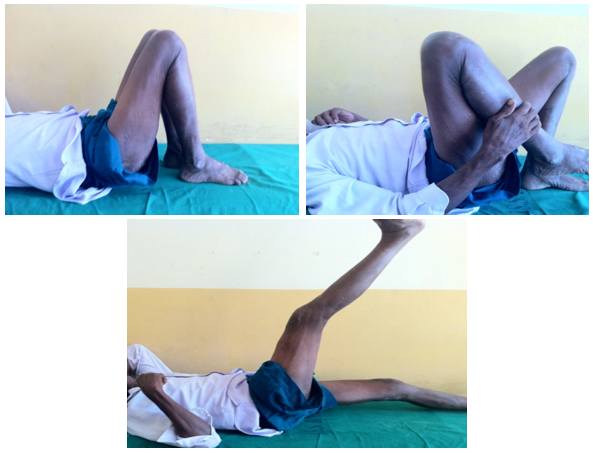 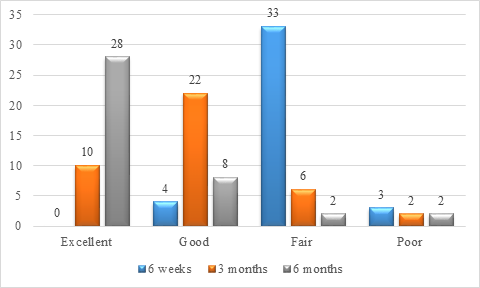 Intertrochanteric fractures are very common in elderly patients, and the outcome may be extremely poor if there is prolonged immobilization. The objective of this study was to ascertain whether the TFN-A is an effective intra-medullary device in elderly patients. In TFN-A, the design of the helical blade allows for improved purchase in the femoral head, accomplished through radial compaction of the cancellous bone around the flanges of the blade during insertion.2, 9 The retention and compaction of the cancellous bone of the femoral head with the helical blade is advantageous compared to the bone loss that occurs with the drilling and insertion of the standard hip screw.2, 10 TFN-A has a single helical blade compared to PFN and hence requires a smaller incision and decreased soft tissue handling. Thus, with a lower degree of invasiveness in terms of operative procedure, maybe a better implant for intertrochanteric fractures, especially in elderly patients.

In the study conducted by Sommers et al.11 and Ito et al.,12 the authors clearly concluded that increasing the bone-implant interface surface with the spiral blade device improved the stability of fracture fixation in osteoporotic specimens, providing a significant advantage over the smaller contact interface provided by the threads of a conventional locking bolt.

TFN-A has 60 valgus angulation at the proximal end, so as to match the anatomy of the greater trochanter. This modification greatly reduces the intraoperative complication like diaphyseal fractures. No patient in our study had diaphyseal fracture, however diaphyseal fractures were noted in the similar studies conducted by Landivoisin et al3 (2.6%), Domingo LJ et al13 (5.6%), Herrera et al.14 (9.6%) and Kakkar et al.15 (10.2%).

The average operating time noted was 59.69 min which was comparable to de Landevoisin et al.3 of 30-90 min. The decreased operative period (average 59.69 mins) and lower degree of invasiveness directly correlated in our study to the decreased amount of operative blood loss and no change in haematocrit post operatively. Gavaskar et al4 and Leu et al6 reported minimal blood loss in patients undergoing surgery with TFN-A.

The average time required for the union in our study was 12.98 ± 3.09 weeks, which was slightly less than Vimal Kumar et al.5 (16.71 weeks) and lesser than Gadgone et al.16 (21 weeks) where PFN was used to treat intertrochanteric fractures.

The overall complication rate of the procedure in the literature was documented to be 11-19%, which is fortunately slightly higher than our study of 10%.4 The single most important complication in our study was superficial surgical site infection (5.00%) which is comparable to studies from Andrez et al.17 (5.70%). In our study, one patient (2.50%) had helical blade back which was comparable with studies of Tagamaki et al2 (2%) and Landevoisin et al.3 (3.7%). The reoperation rate in our study was (2.5%), which was lesser than the study conducted by Iori Takigami et al.2 (4.7%) and Gavaskar et al.4 (5.7%).

An improvement in the learning curve and familiarity with the instrumentation can play a significant role in improving outcome and reducing complications with IM osteosynthesis using the TFN-A. 4 The limitation of this study was the lack of a control group, less sample size.

Choosing an ideal implant for the comminuted intertrochanteric fracture becomes the most important factor for the early union of the fracture and speedy recovery of the patient. We conclude that the trochanteric femoral nail - advanced (TFN-A) is a versatile implant for comminuted intertrochanteric fractures, especially in elderly and osteoporotic patients. The significant reduction in operating time, minimal surgical exposure, reduced blood loss, and a significant reduction in the complication rates makes this implant the best choice in today's orthopaedic practice.