Tuberculosis continues to bear a major disease burden in developing countries. Among skeletal tuberculosis, Tuberculosis hip is the second most common entity after tuberculosis spine causing increasing morbidity and disability especially in the poor socioeconomic class families that are deprived of good nutrition and immunity. Here we report a primary total hip replacement done in a case of advanced active tuberculosis hip.

A 55 year old male patient, farmer by occupation, hailing from a village in Aurangabad district in the Marathwada region of Maharashtra, presented to us with complaints of pain in the left hip referring to the left knee along with a limp since 1 year. The symptoms were gradual and insidious in onset. Additionally he had a history of night cries along with loss of appetite. Since the past 10 months he has stopped going to work and is unable to do activities of daily living. He has inability to both squat and sit cross legged. He has no medical co-morbidities and has no history of addictive habits. He has no history of multiple joint pain or cough or upper respiratory tract infection. On examination, he was vitally stable with mild pallor and no significant lymphadenopathy. There was a limb length shortening of 2 centimetres on the affected side. There was considerable quadriceps and gluteal muscle wasting. Grade two tenderness was present at the Scarpa's triangle, the anterior joint line and the posterior joint line. Femoral artery pulsations were present. He also had a fixed flexion deformity of 15 degrees quantified by Thomas test with further flexion possible till 90 degrees. He had an adduction deformity of 15 degrees and restricted internal rotation than external rotation. He had an antalgic gait with decreased stance phase on the affected side. Knee joint and spine examination were normal.

Preoperative radiographs and MRI showing ‘stage of arthritis’ with gross destruction of bone on either side of the joint with joint effusion, hazy margins, erosions and reduced joint space 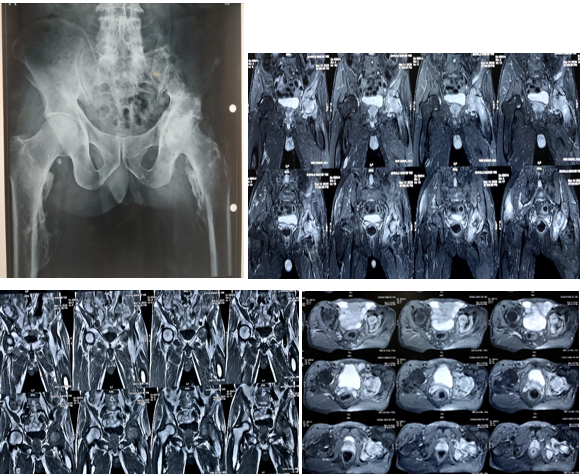 After routine investigations, he was taken for the surgery under spinal anesthesia. Modified Hardinge approach in lateral position was used. Longitudinal incision centered over the greater trochanter and extending about eight centimetres down the line of femur was taken. Tensor fascia lata is split and retracted anteriorly to expose the fibres of gluteus medius. Gluteus medius fibres are then split in a lazy S shaped fashion and the incision was inferiorly extended onto the vastus lateralis. The capsule is exposed and a T shaped incision is taken to incise the capsule. The femoral head is dislocated with external rotation and flexion of the hip and knee. Using hohmann retractors femoral neck osteotomy was done using an oscillating saw. The femoral head was extracted, pus was noted. The infective fluid and tissue were sent for culture and histopathological examination respectively. Copious irrigation with six litres of normal saline, betadine and hydrogen peroxide were done for fifteen to twenty minutes. The acetabular version and inclination are verified. This was then followed by sequential acetabular reaming. The proximal femur is also prepared with external rotation and the hip in ninety degrees of flexion with knee flexion. Measurements are noted, trials were taken and stability was assessed. Uncemented metallic Cup of 52mm size with polyethylene liner, femoral head of 28mm and uncemented femoral stem of size 12 were inserted. Movements were checked and hip was found to be stable. No limb length discrepancy was found and distal pulse was intact. 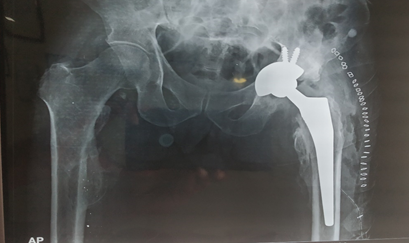 The patient was immediately started on anti-tuberculosis drugs and was continued till one year post operatively. Only first line anti-tuberculosis drugs such as Rifampicin, Isoniazid, Ethambutol and Pyrizanamide were used. No preoperative chemotherapy regimen was given. During the postoperative period patient showed no signs of infection like fever or discharge. His renal function and liver function parameters were also monitored every three months. Weight bearing with the help of a walker was started from day one of postoperative period. Walker was discontinued after 3 weeks, and he started using crutches. The crutches were replaced with a stick after 3 months of postoperative period. Static and dynamic quadriceps hamstring exercises along with hip abduction exercises were taught. He was followed up at 2 weeks, 6 weeks, 3 months, 6 months and 1 year post operatively. He has gained good range of motion, can squat, sits cross-legged and is back doing his routine work. 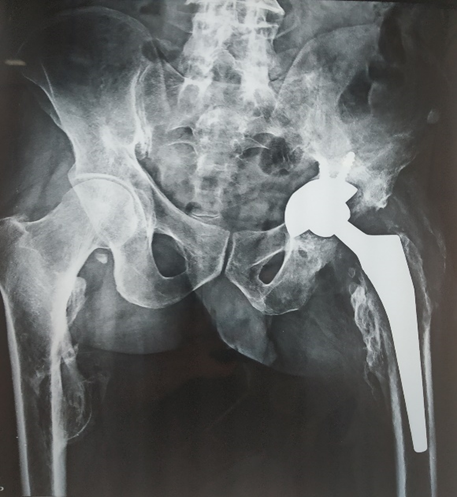 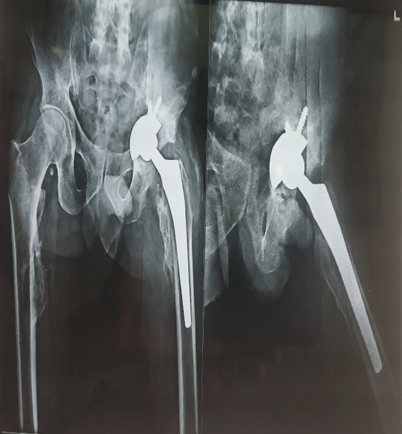 Range of motion at 1 year postop 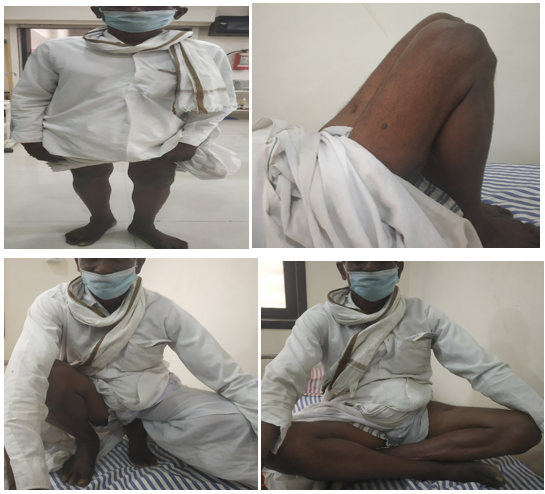 Worldwide, tuberculosis has been an important medical disease. As per the records of the world health organization, ten million people were infected with tuberculosis in the year 2019. Tuberculosis is one of the top ten causes of death attributed to a single infections agent. Among the millions of cases, one to three percent are affected with tuberculosis in the skeletal system. Pain, deformity and loss of function are the consequences seen further. Among osteoarticular tuberculosis, tuberculosis hip accounts for nearly fifteen percent of the cases and has the second most number of cases after tuberculosis spine.1 Tuberculosis hip primarily has four stages beginning with the stage of synovitis, stage of early arthritis, stage of late arthritis and ending with the stage of advanced arthritis. The stage of synovitis shows apparent lengthening along with effusion in the joint. This demands the hip to be in a position of maximum accommodative capacity giving rise to flexion, abduction and external rotation. All other stages show true shortening of the affected limb along with the deformity of flexion, adduction and internal rotation. Pain may be absent in the early stages or if present, it maybe referred to the knee. The patient complaints of night cries, caused by rubbing of the two affected surfaces of the joint whenever a movement occurs as a result of muscle relaxation during sleep. Radiologically, periarticular mineralization and widening of the joint space (due to joint effusion) are seen in the early stages. As the disease progresses, with involvement of the articular cartilage there's narrowing of joint space, haziness of the juxta articular bone, severe subchondral erosion, pathological subluxation or dislocation, gross destruction of bone on both sides of the joint leading to 'wandering acetabulum' and finally fibrous ankylosis of the joint. Ultimately there's articular cartilage damage along with joint destruction. Here's where a surgical modality like total hip replacement offers great hope. However, Total hip replacement in tuberculosis hip has always been a controversial topic with little clarity over the timing of the surgery. Traditionally, active tuberculosis hip used to be always treated with either Girdlestone arthroplasty or Arthrodesis.2 This resulted in significant loss of function and inability to return to normal life for the patient. Total hip replacement in tuberculosis hip proved to be a significant milestone in improving the lifestyle of patient alongwith decreasing the morbidity of the patient. Total hip arthroplasty in the tuberculous hip is a safe procedure and produces superior functional results compared with resection arthroplasty or arthrodesis.3 Largely, tuberculosis hip with total hip replacement has been treated as a two staged procedure worldwide. With the advent of newer implants and advancements made in joint replacement studies, one stage primary total hip replacement offers a new and exciting scope in the treatment of tuberculosis hip in its active stage.

Primary One stage Total hip replacement in a case of advanced active tuberculosis hip can give excellent results if carried out with a meticulous aseptic surgical technique, copious debridement intra operatively and post-operatively, a good patient compliance with the anti tuberculosis regimen. The success mainly depends upon factors like accurate diagnosis supplemented with radiographs and MRI of the hip joint, an operation theatre suitable to the needs for joint replacement and adequate communication with the patient regarding the necessity of a long term chemotherapy regimen. Despite the state of tuberculosis, cementless THA is an effective treatment for advanced tuberculosis of the hip.4 In comparison to a two stage procedure, this also removes the need for an additional surgery thereby decreasing surgical morbidity, cost and making it more economically viable. One stage total hip replacement in active advanced tuberculosis hip proves a vital role in decreasing the stress load of the patient and offers scope in eliminating the need for a two stage procedure in the future. However a larger multicentric study will be required to prove the same. Synthesis of the findings of studies done demonstrates favorable outcomes and low rates of complication, including disease reactivation particularly when anti-tuberculosis therapy is instituted.5