Kakhandaki, Paritekar, Biradar, Nayak, Nandi, and Naik: Tuberculosis of the medial end of the clavicle, a unique presentation

Tuberculosis of the medial end of the clavicle, a unique presentation

Tuberculosis of the medial end of the clavicle is very rare osteomyelitis, secondary to extrapulmonary skeletal Tuberculosis. We report a rare presentation of clavicular Tuberculosis as a swelling in the medial end of the clavicle. Tumours are much more frequent than infections in this bone, and thus it is challenging to conclude before surgical excision. With the worldwide resurgence of Tuberculosis, clinicians should maintain a high index of suspicion as more infection at unusual sites is being reported.

Tuberculosis of the medial end of the clavicle alone, without the involvement of joints next to it, is rare.1 With the increasing recurrence of Tuberculosis as a worldwide infection, a growing number of cases are being reported with unusual characteristics. The medial end of the clavicle is a unique site of Tuberculosis of skeletal origin. Due to its exceptional blood supply, extrapulmonary Tuberculosis in the SC joint (sternoclavicular) region is rare. The tubercular presentation at this site may frequently be unusual, leading to confusion in the clinical diagnosis and delays in proper treatment. In the select research and literature on this topic, the medial end of the clavicle is more frequently diseased than the lateral end.2 Also, Tuberculosis as an infection is known to copy all types of lesions. Solitary lesion of the clavicle without pulmonary involvement leads to confusion in the diagnosis and hence further management. Using the latest investigative modalities like plain radiograph and MRI may indicate a similar diagnosis. Other similar conditions like infection and malignancy may not help to diagnose the tubercular origin.

A 59-year-old male came to the orthopaedics outpatient department with complaints of pain and swelling over the left sternoclavicular region for the past six months. The pain began gradually, it was continuous and dull, aching. The pain used to subside with analgesics. It was also associated with minor swelling, which the patient ignored for the last three months. The patient did not present with any recent trauma or history of fall. Patient gives history of low-grade fever, which used to subside on taking oral tablets. In the last two months, pain and swelling have increased suddenly with the painful movement of the shoulder.

Examination findings suggested that it was a round smooth swelling was present over the right midclavicular region, which was 5x3 cm in size. It was tender swelling, firm to hard in consistency and not adhering to the skin and fixed to the underlying bone. The skin over swelling was not discolored or hyperpigmented. No dilated / engorged veins / discharging sinuses. 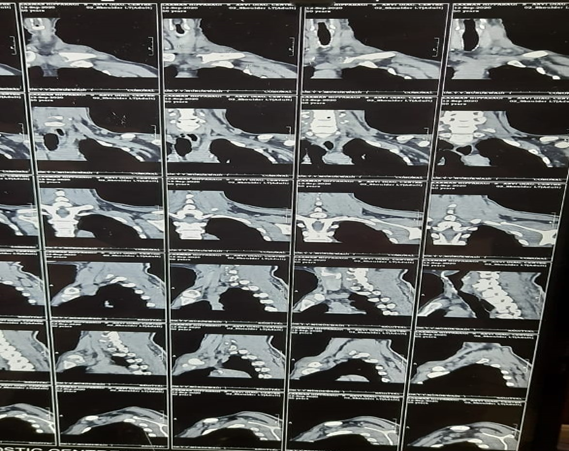 Histopathology report of excision biopsy of the swelling showed a microscopic impression of foci of necrosis with granulomas with giant cells and chronic inflammatory cells, fibro collagenous tissue admixed with plenty of necrosis. No granuloma/malignancy seen. Impression was a Granulomatous lesion with necrosis, suggestive of Kochs Induced pathology.

Clavicular Tuberculosis is a rare entity.3 Secluded clavicular Tuberculosis is even less frequent than other skeletal Tuberculosis.4 Tuberculosis can involve any site of the clavicle, with the most common invovlement is noted in the medial one-third region. Adjacent joint involvement can also be seen. It is associated with pain without significant bone destruction, which may later present with cold abscess, discharging sinuses, and non-healing ulcers.3 Radiologically the lesions in Tuberculosis can be either destructive or proliferative, and in rare, pathological fractures can also be seen.3 Conventional radiographic pictures may show multiple cystic cavities or sequestrum, honeycomb appearance or diffuse thickening. Such a Diagnosis based only on plain radiograph is challenging due to overlapping anatomical structure, and therefore it is not a valuable tool for evaluating the changes.3 CT scan and MRI provide better images and diagnosis.5 CT scan is a better tool for appreciating bony changes, and MRI is more helpful in appreciating the extent of the lesion with determining soft tissue and bone marrow involvement.6 Diagnosis can be than be confirmed by histopathological and microbiological examination. Bony tissue specimen can be obtained by Fine needle aspiration cytology(FNAC), core biopsy and/or curettage.3 The primary treatment modalities are multidrug anti-tubercular regimen. However, in advance cases which are not responsive to oral treatment, anti-tubercular drugs should be combined with surgical measures such as debridement and curettage of lesion or resection of infected clavicle without loss of function. Surgical intervention is more useful when the disease is unresponsive to medical treatment, when the diagnosis is uncertain, or an impending abscess burst. The mainstay of treatment is modern medical therapy with multidrug antimicrobial drugs in which isoniazid, rifampicin, pyrazinamide, and ethambutol for eight weeks and rifampicin and isoniazid for the next forty weeks.7 The response for treatment is monitored clinically by decreasing the swelling or ulceration and biologically by decreasing ESR. Surgical excision is indicated when the clinical diagnosis is unclear or the disease does not respond to medical therapy alone.

Clavicle tuberculosis should be considered an important differential of non-traumatic lesion of the clavicle. And chronic swelling at a strange place not responding to routine treatment, a high index of suspicion should be kept for extrapulmonary Tuberculosis.