Ansari, Mahajabeen, and Fatima: A study of titanium elastic nailing in the surgical management of fracture shaft of femur in children

The most common fractures among long bones are femoral fractures. Femoral shaft fractures account for 1.6% of all paediatric bony injuries. Treatment of long bones fractures in children continues to enhance as newer techniques evolve. Previously most of the fractures were effectively managed conservatively & only unstable and displaced fractures were taken up for fixation. Children in the age group of 5-17 years are treated either with traction, hip Spica, flexible/elastic stable retrograde intramedullary nail, or external fixator.

Objective: To study the outcome of Titanium Elastic Nailing System (TENS) for the treatment of femoral shaft fractures in children.

Materials and Methods: This prospective study was carried out at the Department of Orthopaedics, in our hospital. 30 patients, 5-17 years aged, with fracture shaft of the femur were treated by closed reduction internal fixation with flexible Titanium nailing, followed up clinically and radiologically every 2 weeks upto 2 months, then monthly till bony union and full weight bearing by the patient.

Results: The clinical results were evaluated using Flynn’s criteria of scoring as, Excellent in 28 patients (93.33%), Satisfactory in 2 patients (6.67%) and poor in none. Full weight bearing was possible in mean time of 10.1 weeks (range; 7-12 weeks).

Conclusion: CRIF with TENS is very effective in management of paediatric shaft femur fractures in the age group of 5-17 years with advantages of lower rate of infection, early union, early mobilization and good range of movements.

Femoral shaft fractures are among the foremost common major pediatric injuries treated by orthopaedic surgeons. They represent 1-2% of all fractures in the paediatric population males are affected more commonly than females.1

The treatment has traditionally been age-related, influenced by the location and type of the fracture and associated injuries. Because of rapid healing and spontaneous correction of angulations, most of the femoral shaft fractures in children are often treated conservatively by immobilization in a Spica cast either immediately or after a period of traction with good long term results.2, 3

These methods were associated with problems and complications like pin tract infections, loss of reduction, refracture after implant removal, growth arrest and avascular necrosis of the capital femoral epiphysis. There is little disagreement regarding the treatment of younger children (usually less than 5 years of age) and adults (>16 years). For children aged between 5 and 16 years, there are wide varieties of surgical and nonsurgical treatment options available with no clear consensus as to the preferred treatment.5

The inclusion criteria was Simple femoral shaft fractures and Type I and II open fractures with ages between 5-17years, either sex. The exclusion criteria was Type III open fractures, metaphyseal fractures and all the factors contraindicated for this procedure. In this study, 30 cases of femoral shaft fractures in children admitted in the orthopedic department were selected. Through clinical history was taken including age, sex, personal, past history. Routine Blood investigations were done including CBC, RBS, Serum Bilirubin, HIV, HBSAg, BT, CT, PT. X-rays Pre-operative, post-operative and at follow up were taken.

All patients were primarily immobilized with Thomas splint. Pre-operative x rays were taken as follows - X ray full length femur AP view and Lateral view. Anesthesia fitness taken and patient was posted for surgery. The diameter of the nail was assessed preoperatively on radiographs taking the nail diameter as 40% of the isthmus (narrowest part of the medullary canal). The size of flexible nail should be approximately 40% of the diameter of the femoral canal at its most narrow point. A systemic antibiotic, usually a third generation cephalosporin was administered just before induction of patients by anaesthetists. The surgery was performed with the patient under general anaesthesia. The position of the patient is supine on the fracture table with a traction boot and the c -arm was so adjusted that anteroposterior and lateral views of the injured femur would be obtained intraoperatively. The standard technique of titanium elastic nailing in femur is Retrograde (ascending). Perineal post was well padded to avoid any injury to the nearby structures. Image intensifier was used to locate the position of skin incision and for creating entry hole within the metaphysis. The entry point was 2.5-3 cm above the physis. The entry points were at an equivalent level both medially and laterally. Two longitudinal incisions were made on the lateral and medial aspect of the distal femur, starting 3 cm above the physis and extending distally for 2.5 cm. Fascia was dissected along the line of incision and blunt dissection was carried out till the periosteum was reached. Medullary canal was opened using an awl or drill bit.

The next largest drill bit size relative to the diameter of nail was selected. The drill bit was started perpendicular to the bone surface, then slowly angulated to 45° in relation to axis of shaft and 10° anteriorly. Then the drill bit was advanced at this angle until it reached the medullary canal. The two nails of an equivalent diameter were selected in order that the bending forces are equal, avoiding malalignment. The proper nail diameter shouldn't be over forty percent (40%) of the width of the canal. Hence both the nails of equal size should be filling 80% of the isthmic region of the medullary canal. The opening was made slightly larger than the selected nail diameter. The traumatic tip is formed as a skip, which guarantees better gliding inside the cortex. Two Titanium nails of the same size were inserted in all cases. Both nails were inserted about 2 cm proximal to distal femoral physis from medial and lateral sides. Lateral nail was directed till it was within 2 cm of proximal femoral capital physis whereas medial nail was inserted till it was about 1 cm from greater trochanteric physis. Diameter of individual nail was selected as per Flynn et al's formula (Diameter of nail= Width of the narrowest point of medullary canal on Antero posterior and Lateral view x 0.4mm). All titanium nails were bent at insertion site and cut near to bone leaving 1.5-2cm of nail protruding for later easy removal. 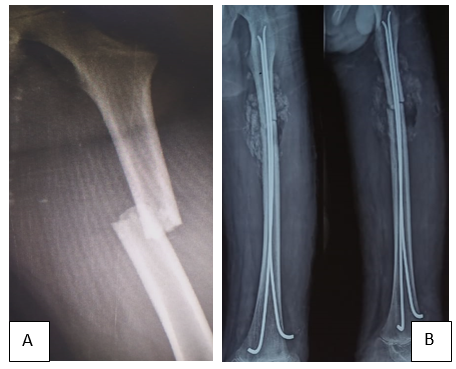 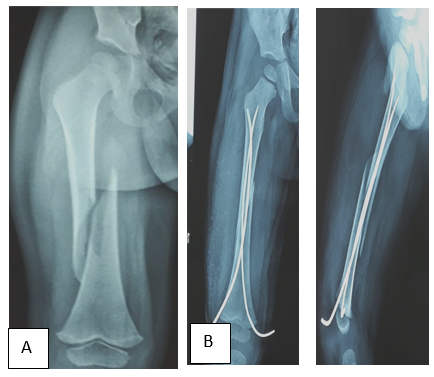 Average operative time for this procedure was 1hour. Post-operative X-ray femur full length taken in AP and Lateral view. On the 1st or 2nd postoperative day, patients were started on static quadriceps and knee bending exercises. After discharge, patients were called for follow-up after every 2 weeks up to two months and subsequently at monthly intervals. Patients were assessed clinically and radiologically at each follow-up. Time of weight bearing was individualized depending on fracture pattern, stability of reduction and rigidity of fixation. The final results were evaluated using criteria by Flynn et al.7 All patients were immobilized for 6 weeks in Thomas splint. Intravenous antibiotics and analgesics given. Static quadriceps and Static hamstrings exercises started from 2nd post-operative day.

After 6 weeks Thomas splint was removed and active and passive hip, knee and ankle range of movements were started and non-weight bearing started with the help of walker. Serial radiographs taken at 6 weeks, 12 weeks, 24 weeks. Full weight bearing was allowed once radiographic and clinical union was achieved. The functional outcome was assessed using Flynn’s scoring criteria. The duration of follow up was up to 24 months. Nail removal was usually done at 7-9 months post op after fracture union. 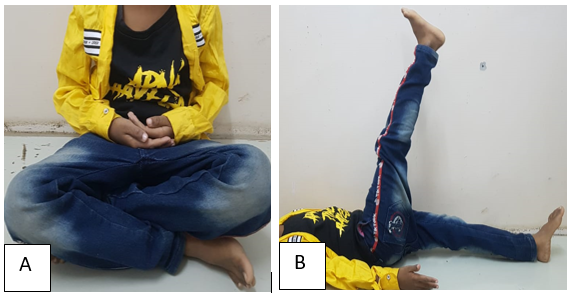 In the present study we included 30 cases treated with titanium elastic nailing system. All the femoral shaft fractures were stabilized with two titanium elastic nails of same diameter. Length of nail was 45 cm, which was cut to required length accordingly during surgery. The diameter of nail chosen varied from 2 - 5 mm.

Showing 2.5mm nail was most commonly used compare to 3.55mm nail in our study 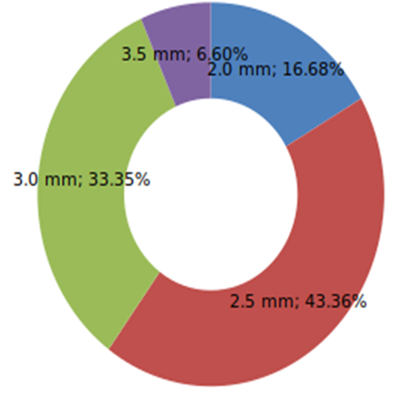 TENS nailing limit the amount of permanent deformation, as they are elastic, biocompatible and promote healing by limiting stress shielding and no metal sensitivity reactions are observed.10 Literature suggests there were excellent union rates in TENS nailing of paediatric femoral shaft fractures.11

Micro-motion conferred by the elasticity of the fixation promotes faster external bridging callus formation. The periosteum is not disturbed and being a closed procedure there is no disturbance of fracture hematoma, there by less risk of infection.12

According to Flynn’s score criteria results were Excellent 93.3% (28/30) cases and satisfactory outcome in 6.6% cases (02/30) in our study. Our study had similar findings when compared to Bagul Rahul et al13 & Mohit Khanna et al18 study. Whereas Avinash Pulate et al19 had noted poor outcome in one case.

Complications such as knee stiffness in 03 cases (10%) & Nail impingement was seen in 13.3% (04/30) cases. In Saurabh Gupta et al20 study 70% Shaft fractures cases had no complications, only 20% had Irritation at entry site, 5% had Infection and proximal nail migration. In DiveshJalan et al21 study the most common complication encountered was soft tissue irritation at the nail entry site seen in 6 cases.

No patient had varus/valgus angulations, anterior and posterior angulations and rotational malalignment. Malunion was noted in 01 case (3.3%). Flynn et al.22 reported 10 (4.3%) cases of minor angulations out of 234 fractures treated with titanium elastic nails.

Singh et al.23 reported angulations in both anteroposterior and varus/valgus planes was seen in two cases and one case, in which two different diameter nails had to be used, had posterior bowing of 10° and 10° of varus tilt.

Our study results show that CRIF with Titanium Elastic Nailing is effective with advantages of lower rates of infection, early union, early mobilization and can be used successfully regardless of fracture location and fracture pattern. The indication for TENS in paediatric femoral fractures are expanding as their advantages are realized and complications of the operative methods of stabilization are reported.

Titanium Elastic Nailing System is a simple, easy minimal invasive procedure appears to be safe and reliable method, which has good long term results in the treatment of paediatric shaft fractures of long bones in children aged 5-17 years.

The author declares no conflict of interest.