Introduction: Total hip arthroplasty (THA) for femoral neck fracture (FNF) cases is five times associated with the dislocation risk compared to THA for osteoarthritis. It is highlighted that a THA with dual mobility cup has lower rates of dislocation in elective surgery and revision procedures. However, there is a paucity in studies regarding this treatment area. The objective of this study was to evaluate the functional outcome of displaced FNF with dual mobility THA.

Conclusion: Current cement-less dual mobility THA is associated with a pain free mobile hip and durable acetabular fixation with an increased range of movements at the hip. Dual mobility cup may be considered a valuable option to prevent post-operative dislocation in elderly patients with FNF.

Femoral neck fracture (FNF) is a global primary public health concern. Nearly 3 and 12 billion USD are respectively spent for managing elderly patients (>60 years) suffering from hip fractures in the United Kingdom and United States of America annually.1, 2 In India, there were 0.6 million cases of osteoporotic hip fracture in 2004, which is expected to significantly rise by 9.3% by 2025 due to increase in the elderly population.3, 4 Elderly people are fragile and suffer from multiple medical co-morbidities such as anemia, hypertension and diabetes mellitus.5 Females are reported to be more prone to hip fractures with a male to female ratio of 2:1.6 Moreover, patients with a displaced FNF are also associated with an increased morbidity and mortality, along with reduced mobility and function.7

Researchers have reported that primary cost determinants for hemi-or total hip arthroplasty (THA) is around €26,399/patient for the first two years. A majority of the amount is used in the first year, for rehabilitation and nursing expenses.8 Therefore, cost reduction is mainly emphasized by many researchers by focusing on the improvement in surgery time, along with efficiency of rehabilitation phase post hip fracture surgery. Furthermore, an ongoing discussion about the optimal treatment for displaced FNF in elderly patients has been taking place for decades.9, 10

Researchers have evaluated the THA with a conventional cup as well as a dual mobility cup (DMC) and have highlighted that a THA with DMC has lower rates of dislocation in elective surgery and revision procedures.11, 12 However, there is a dearth in literature on the effects of THA with DMC for treating patients with displaced femoral neck fractures and only a few studies on dual mobility THA as a treatment modality in FNF have shown good results. Therefore, the present research was focused on assessing the functional outcome of dual mobility total hip replacement for FNF due to it being a relatively newer implant with little data available regarding the implant in the Indian population.

This prospective study was conducted from December 2015 to August 2017 at a tertiary care centre. Approval from the institutional ethics committee and written informed consent from all patients undergoing dual mobility arthroplasty was acquired before the commencement of the study. Patients with displaced FNF <10 days old (Garden type 3-4) and aged >55 years were included, and those with co-existing secondary osteoarthritis, avascular necrosis, infective pathology, tuberculosis and rheumatoid arthritis were excluded from this study.

Based on a previously conducted study 7 that revealed a 95% success rate with dual mobility cup, considering a relative precision of 12% and desired confidence interval of 95%, a minimum of 14 subjects were needed for the current study. Hence, a total of 25 patients having FNF were enrolled for this study.

All patients were assessed preoperatively with radiographs of pelvis with both hips – anteroposterior (AP) view and relevant blood investigations along with Harris hip score (HHS), visual analogue scale (VAS) score, vertical and horizontal offset on X-ray pelvis and length of limb shortening (clinically). The HHS was a questionnaire-based assessment of patients before undergoing surgery, regarding their preinjury condition.13 VAS score was taken to assess the amount of pain,14 while the amount of limb shortening was measured using a non-stretchable measuring tape.

Patients were counselled regarding the consequences of total hip replacement (inability to sit on the floor, sit cross legged or squat post-operatively) and were operated by trained orthopedic surgeons using the posterior approach (Figure 2), under combined epidural and spinal anesthesia. 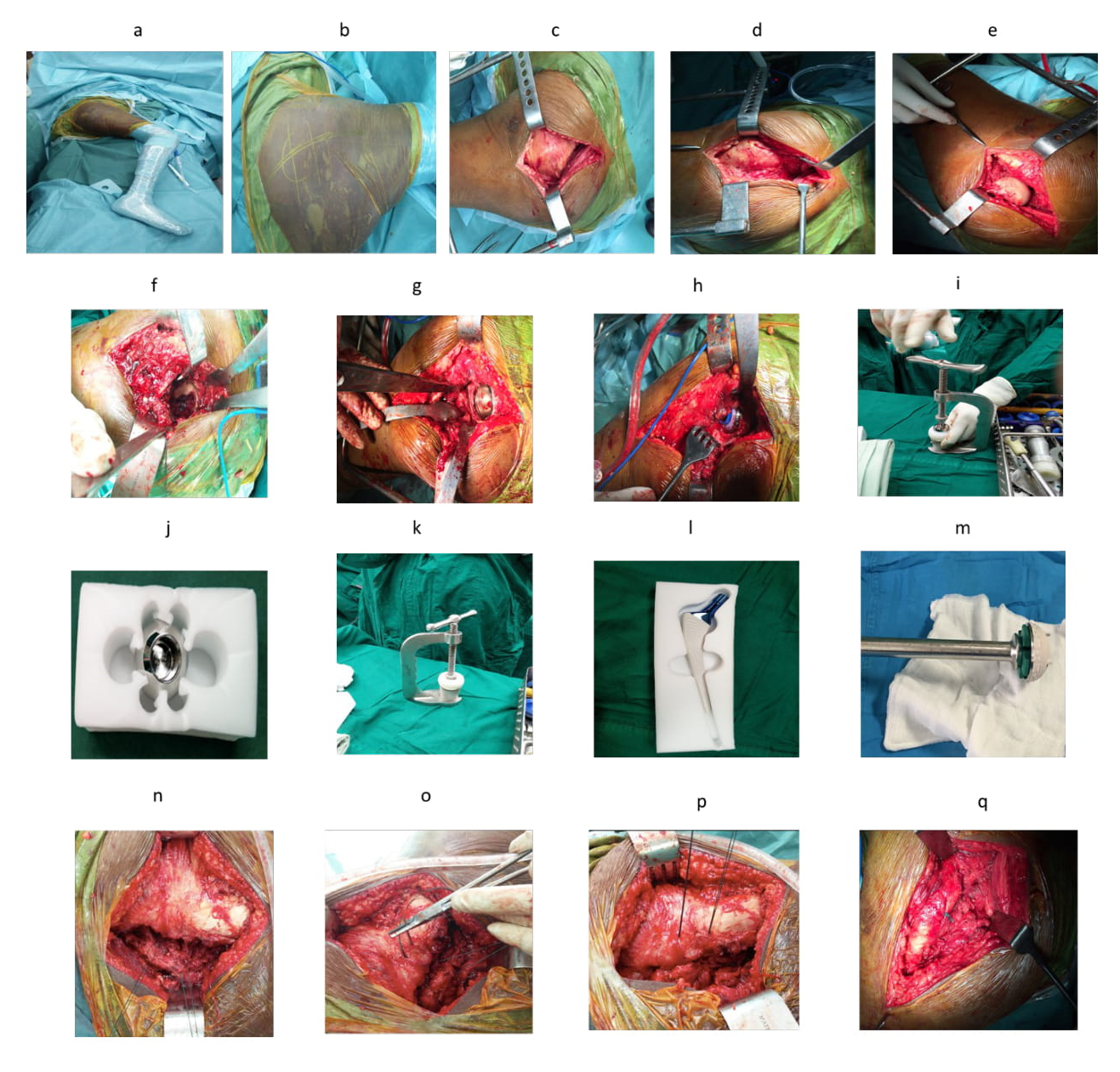 All patients were managed preoperatively with skin traction and foot end elevation of bed. Patients were operated under combined epidural and spinal anesthesia. Cefuroxime injection (3 g) was given 30 mins prior to skin incision. The surgical procedure is outlined in Figure 2 a-q. Patients were positioned on right or left lateral position with the affected hip facing upwards on the operating table. The pelvis was stabilized anteriorly with a pelvis post at the level of pubic symphysis, and posteriorly with a post maintained at the level of posterior superior iliac spine with adequate padding. Axillary padding was kept, and ipsilateral upper limb maintained on an aeroplane splint. The opposite knee was kept in semi flexed position to prevent forward tilting of pelvis and for intra-operative limb length assessment. Proper padding in all pressure points (knee, axilla and forearms) was done (Figure 2 a).

The operative site was prepared preoperatively by scrubbing before painting, and the affected hip was draped in a sterile manner with disposable drapes. The outline of the greater trochanter was marked with a skin pen (Figure 2 b). Patients were operated by using the Posterior Moore approach16 as described by Moretti et al.17 Trial implant insertion was followed by insertion of the final implants. Vertical offset was measured intra-operatively from the base of lesser trochanter to centre of femoral head and compared to preoperative measurement. Later, the hip was reduced, and stability was then confirmed in all movements and shuck test done. Whenever shuck test laxity was noted, next neck size was used, with care not to cause lengthening and a combined anteversion was measured.

Wound wash was given and short external rotators (SER) were repaired to greater trochanter (GT)18 wherein using a 2.7 mm drill bit, two holes were made in the GT and SER attached to it, followed by application of a suction drain of size 14 and later fixed using Mersilk sutures. The wound was closed in layers using interrupted sutures (Vicryl No. 1 and 2-0), followed by skin stapling. Immediately post-operation, an abduction pillow was put before shifting patient out of the operation theater.

The suction drains were removed after day 2 post-operation, followed by suture removal on day 12 post-operation. Ambulation was started on day 1 post-operation with full weight bearing with walker. Abduction pillow was maintained between the legs immediately post-surgery and patients were advised to follow it until six weeks. On an average, patients were discharged on day 5 post-operation and followed up at one month, six months and one year after removal of sutures. Plain radiographs were taken on each follow up visit to assess the implant position. All patients received only three doses of one parenteral antibiotic and the first dose of anticoagulant therapy (low molecular weight Heparin 40mg) was administered subcutaneosly within 12 hours of surgery and continued once daily for five days post-surgery, followed by oral dose of Ecospirin (75mg) once daily for three weeks. Calcium supplementation was also given for three months post-surgery.

Details of comorbidities among patients

[i] COPD: Chronic obstructive pulmonary disease and percentages can be more than 100% as patients have more than one comorbidity

Comparison of various variables in relation to success rate

Till date, there have been only a few studies that have focused on issues pertaining to the use of dual mobility THA for the treatment of acute displaced FNF. This is one such prospective study among a handful, that has analyzed the use of dual mobility cup in southern region of India with respect to dislocation, revision rate and functional outcome after THA with captive DMC. Researchers have highlighted that dual mobility THA has good clinical short to long-term results with significantly less pain, lower dislocation rates and better outcomes represented by quality of life and functional scores. 20, 21, 22, 23

Most of our patients prior to fall were active and had good functional capacity. However, majority of our patients had excellent and good results post-operatively. The change in HHS post-surgery was significantly higher compared to before surgery (p<0.001). Results of Fahad et al.27 were in concordance with present study findings and reported significantly higher HHS post-operatively (p<0.01). However, they compared bipolar hemiarthroplasty vs. THA with DMC. A pre- and post-operative scoring with a validated HHS in the present study has taken account of lifestyle of study population, whose activities of daily living involve sitting down on the floor without wearing shoes. This may have aided to provide more information about the functional results of these implant systems. Significant improvement in the VAS score 6 months post-surgery was noted as well (0.32±0.48). In a study where direct anterior approach was employed, median VAS score of 0 was reported during the 3 months to 1-year post-surgical follow-up period. 26 Moreover, researchers have ruled out concerns about the potential wear by using a mean annual volumetric polyethylene wear of 54.3 mm3.28 Therefore, DMC may be a choice in severe osteoporosis cases, however, the fixation quality remains questionable for longer period of time.

Post-surgical complications were analyzed, and three complications in total were noted. One patient had post-operative foot drop which did not improve up to one-year post surgery. Another patient sustained an acetabulum wall fracture Paprovsky Type B1 and required a single plating of posterior column and cemented cup fixation. The third patient sustained a periprosthetic fracture Vancouver Type B1 after history of a repeat fall which was treated by cable fixation alone. One of the most common post-operative complications noticed in patients post-THA is fracture.29

IPD is peculiar to the DMC due to bottle opener effect. However, this study did not note any intra-prosthetic dislocation (IPD) post-operatively on follow up. Similar findings were noted by Tarasevicius et al.,30 who also reported no dislocation at one-year post-surgery follow up. In contrast to our study, a dislocation rate of 1.4% (3/214 patients) was reported by Adam et al.,31 in a prospective multicentric study. The DMC has ability to increase the scale of movement before impingement and dislocation, which may be a probable reason for reduced dislocation rates.32 Furthermore, the IPD incidence in newer designs is possibly low due to the polished neck and reduced wearing of the liner at third articulation.33 However, medical practitioners must be aware of these conditions so that they do not miss dislocation, which may result in extreme metallosis and DMC failure.

In this study, the limiting factor is the short follow up period despite the promising initial results. The short-term results after implantation of DMC as a part of THA in displaced FNF need a longer follow up of 10 years or more for more validation.

Currently cementless dual mobility THA is associated with pain-free, mobile hip with durable acetabular fixation with increased range of movements at the hip. However, appropriate care must be taken about its specific complications, such as intra-prosthetic dislocation. THA with DMC has reduced dislocation rates in FNF, and therefore, may be considered a valuable option for displaced FNF in elderly patients.

RT Burge D Worley A Johansen S Bhattacharyya U Bose The cost of osteoporotic fractures in the UK: Projections for 2000-2020J Med Econ200145162

A Mithal P Kaur Osteoporosis in Asia: A call to actionCurr Osteoporos Rep2012102457

WH Harris Traumatic arthritis of the hip after dislocation and acetabular fractures: treatment by mold arthroplasty. An end-result study using a new method of result evaluationJ Bone Joint Surg Am196951473755