Materials and Methods: The Masquelet technique is a staged procedure in which a temporary skeletal stabilization is paired with implantation of an antibiotic spacer and left in place for 6–8 weeks, during which a “pseudo-membrane” form around the cemented spacer. During the second stage, the membrane is incised, and the antibiotic spacer is removed, and a bone graft is placed. In our case where a significant segmental femur loss in opting for limb salvage. In our study term between 2018 to 2021, we have considered grade II and Grade III compound injuries with significant bone loss and with no Distal Neuro Vascular Defiscities with proper follow-up.

Result: All the cases operated developed full range of motion over the knee and started weight-bearing from the 8th month of initial surgery with no limb length discrepancy.

Conclusion: Dual plating method with the Masquelet technique showed promising output for the grade II & grade III b supracondylar fractures with significant bone loss. however, it depends on the co-morbidities and the lifestyle of the individual to get adequate output.

The supracondylar fracture femur associated with severe comminution along with significant soft tissue injury or loss is common in RTA and high-energy injuries. These fractures are severely comminuted. The treatment of intra-articular comminuted fragmented distal femoral fractures remains a challenge even after a lot of advancements in fracture management in recent times. Long-term disability along with extensive articular cartilage damage may occur along with limb length discrepancy. Distal femur fractures are complicated by bone quality, a too-short distal fragment for adequate fixation, blood loss, malunion and non-union, and increased mortality are common complications.1, 2, 3, 4 The locking plate is the best option for treating supracondylar fracture femur with relatively high commination and fragments with low failure rates. A single lateral plate of the distal femur has a high failure rate.2 A medial plate along with a lateral plate decreases the chances of failure rate.2

Supracondylar femur fractures were previously treated with condylar buttress plates.5 Locking plates are known for having increased biomechanical resistance with the advantage of greater numbers of fixation screws in the distal femur metaphysis.6, 7

Segmental bone defects are complicated with significant long-term morbidity. Managing segmental long bone defects is challenging in which, amputation used to be the preferred line of treatment. The development of Limb salvage over the last half-century increased the chances of doing complicated surgeries.8 Bone grafting techniques were limited by unknown graft resorption, even where the recipient site is from a well-vascularized site.9 Using an antibiotic cement spacer and then grafting in that space which then induces biomembrane is described as a good treatment strategy.10, 11 Modified Nicoll’s12 technique uses tri cortico-cancellous strut bone graft after freshening the end is placed under optimal compression with the help of compression plates.

Between 2018 and 2021, all patients admitted with posttraumatic bone defects and managed by the Masquelet technique were included. inclusion criteria: injury type- grade II, III compound injuries, location- distal 1/3rd femur or communized supracondylar femur, with soft tissue injury, length of bone defect around 4 to 7 CMSs. All the patients were operated within 12 hours of injury. 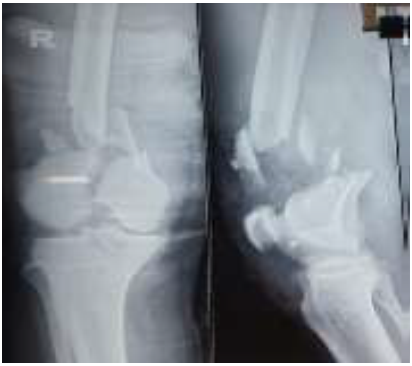 Once serial irrigation and debridement had resulted in a sterile wound, the defect was prepared for the first step of the Masquelet technique. The main aim is to recreate the articular surface of the distal femur. Through direct visualization of the distal femur, a dual plate with screw fixation was done to stabilize the articular surface. Next, an antibiotic-impregnated spacer (preferred to use 3 g vancomycin + 3g of cefazoline per 40 g of cement prepared) was placed in the segmental femur defect and thorough wash was given and an incision was closed in layers with a drain in situ. Once postoperative antibiotics were complete and pain controlled, the patient was discharged from the hospital with non-weight bearing precautions and removal of the drain on the second postoperative day with the advice of knee ROM from postoperative day II. 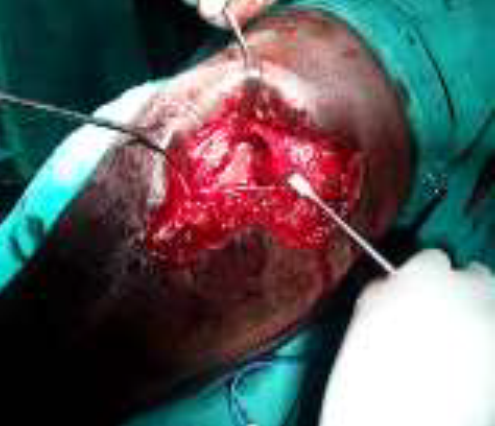 Showing the lateral view after stage 1 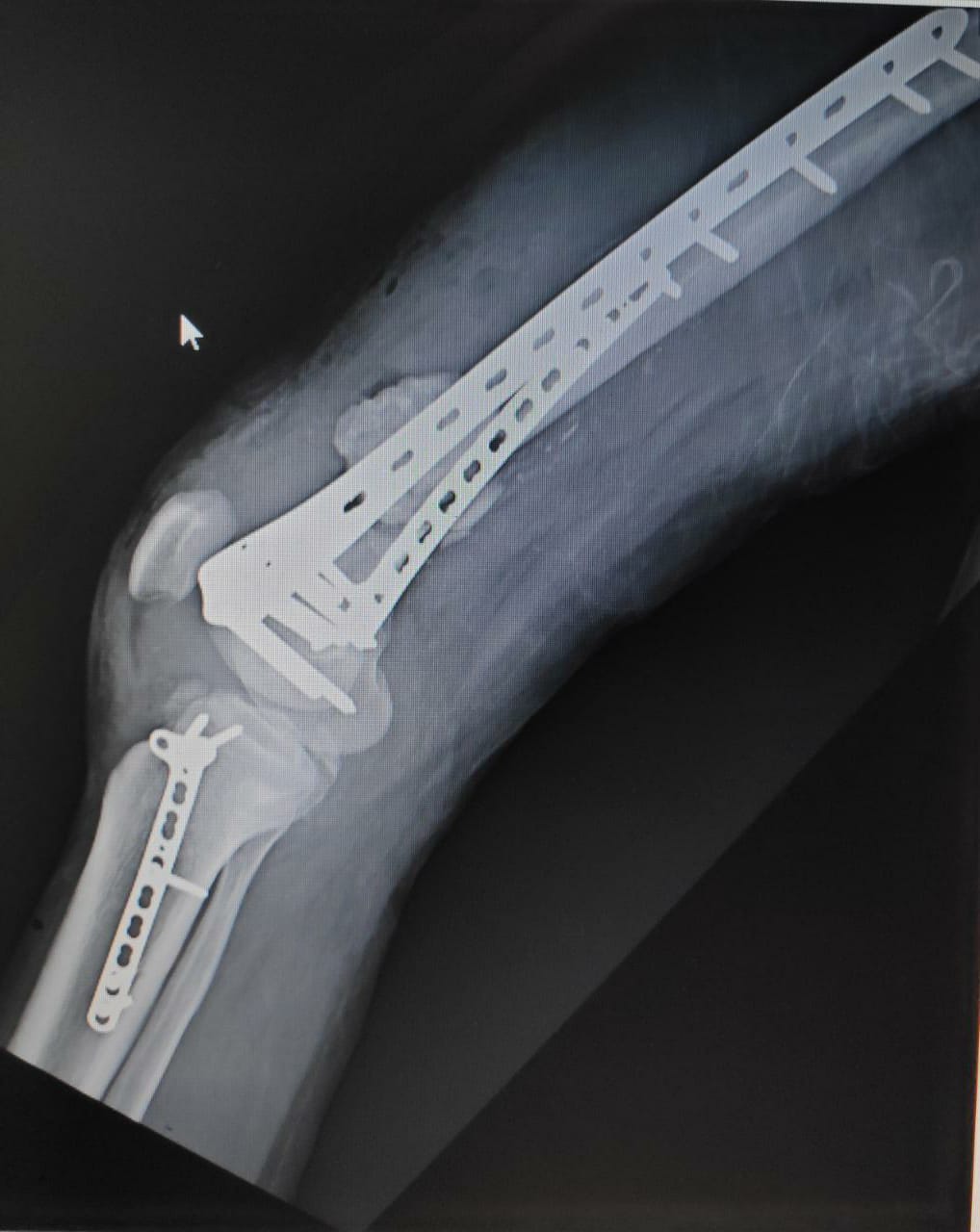 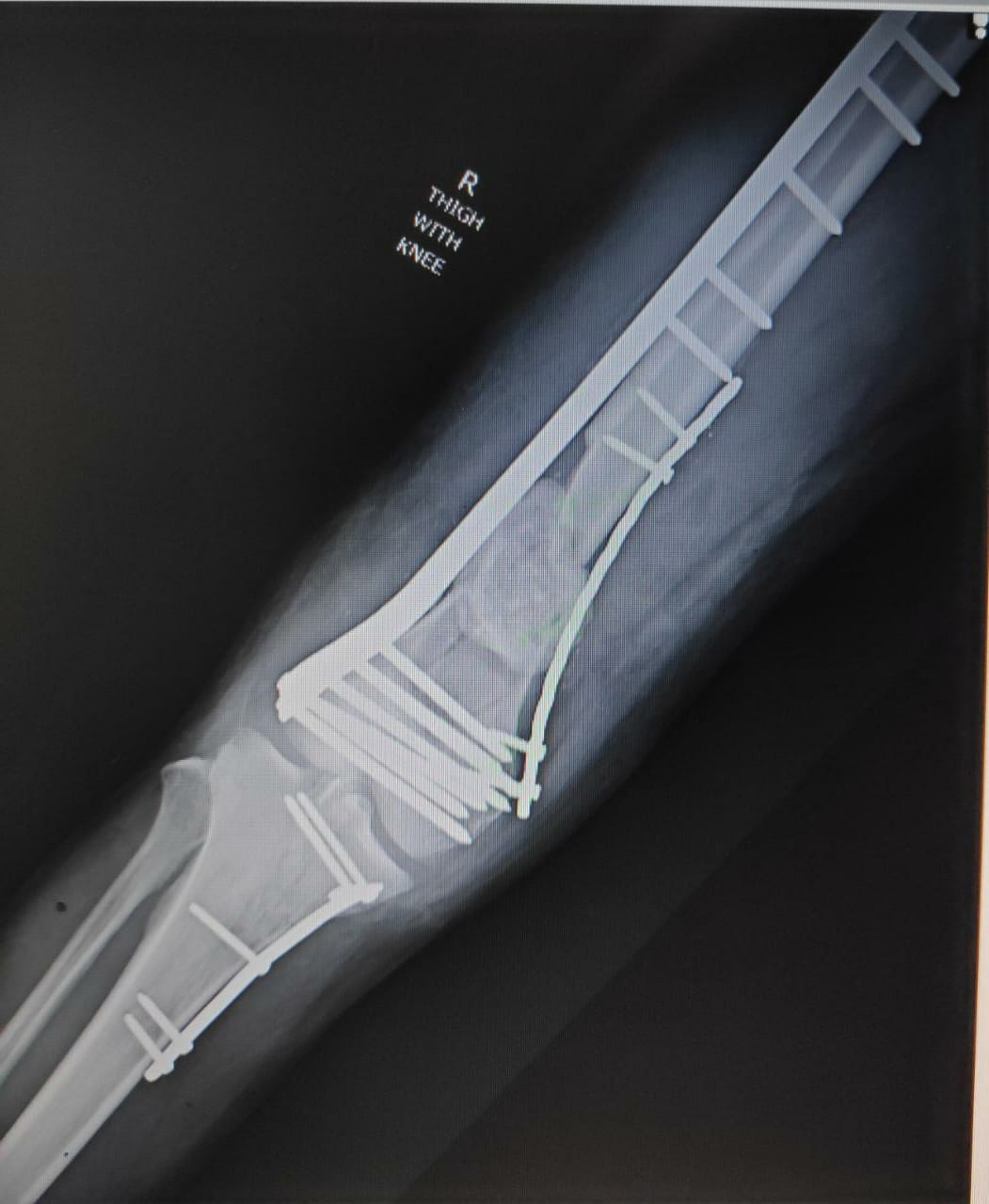 Six weeks later, the patient was returned with no wound site infection was noticed, X-rays taken and with required investigations, the patient was shifted to operation theatre the pseudomembrane was cleanly incised anteriorly, and the antibiotic spacer was carefully extracted using an osteotome and the fragments were removed. Ipsilateral tri cortico-cancellous strut bone graft from the iliac crest and non-vascularized fibular strut grafts were placed in the defect after freshening the ends, tension-less closure of membrane was done. Tissue sampling sent for microbiological analysis was found negative for any organisms.

X-ray after harvesting a bone graft from the fibula 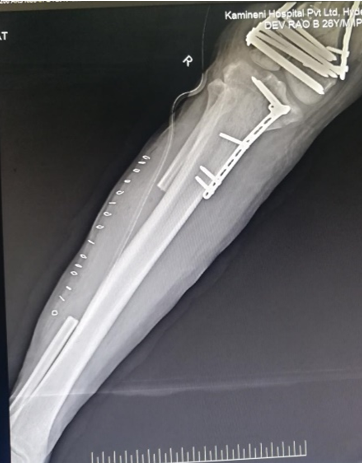 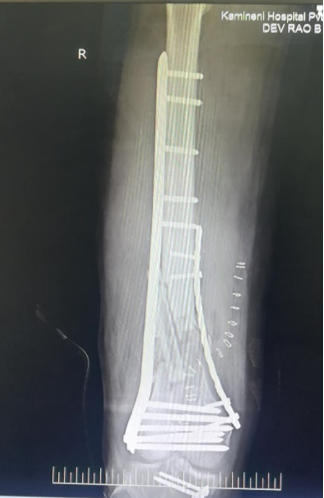 Active & Passive ROM exercises begun from postoperative day 2 with the supervision of a physiotherapist. Active assisted exercises started from the 7th week. The patent was kept on non-weight bearing until the 12th postoperative week, after which partial weight-bearing was started from 3rd month to 6th month, and then to full weight-bearing as tolerated by the patient from the fourth month to 6th month. By the end of the 8th month, the range of motion increased to almost full extension and 100 to 110 degrees of active flexion. 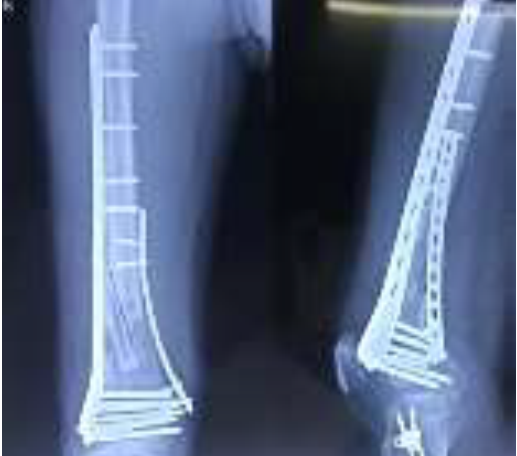 Flexion of the knee after 9 months follows up 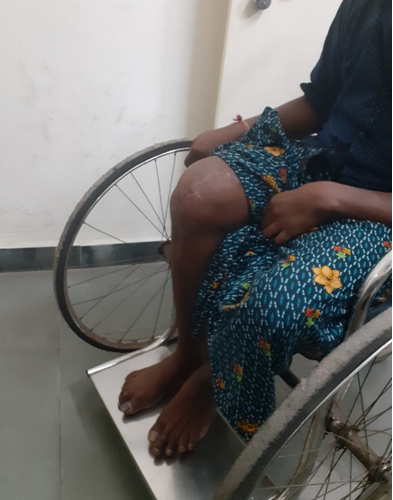 Extension of the limb at the end of 6th month 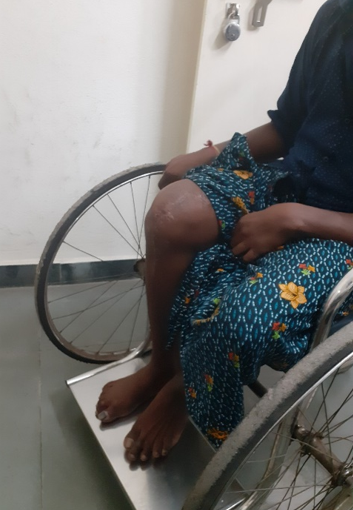 Alain-Charles Masquelet has developed a two-stage technique showing results of 35 patients with diaphyseal defects between 4 to 25cm.13 Before this Ilizarov and vascularized bone technique was the well-known procedures for large diaphyseal bone defects, this has a longer time to heal and with malposition of the vascularized graft causing deformities.14 In the Masquelet technique, the reconstruction time is independent of the defect size.15 Tan et al. described the histology of the pseudomembrane which contains a high amount of mesenchymal stem cells than periosteum in a cohort study of 7-patient, & conclude that because of the high concentration of stem cells which led to the successful reconstruction of large bone defects in this method.16 Both Masquelet and composite fixation has been successful in reconstructing segmental bone loss independently.17 We compared our study with previous studies done by Manohar G, Shibu Andrews Study (2012).18, 19 In his study it showed that fixation with the different plates and its outcome his average flexion and union rate and union time were all more compared to our study with dual plating technique. In another study Siliski20 the knee rom which was achieved after union was 107° and our study with dual plating clearly showed better results even with gap management. In another study by Rushi Solanki19 their average rom was 95.8° which is shows our dual plating is far better than their post operatively. Another study by Cheng21 showed that knee Range of motion can be achieved by orthogonal dual plating fixation. Another study by Zhibiao Bai22 showed double plating has better outcome and these reports are equal to our findings in our procedures. Another study by Stella23 showed that dual plating technique allowed the positing of good autograft with good quality which ultimately showed great results. Mohamed A Imam24 showed that this technique is best for anatomical reduction and stable fixation and it avoids major complications to the patient. Micheal25 showed union occurred in 12 months which is late than our study which showed far well union than his study. Study by Matthew Gregory Bologna26 showed that union rate is good in the dual plating than the single plating. Our cases presented unique challenges for surgical planning of reconstruction for limb salvage, the inherent strengths of these two techniques to achieve a successful result. The construct stability which was provided by composite fixation is stable and superior, and our combination of autograft bone succeed within the boundaries of the pseudomembranous capsule which was created by from Masquelet technique. Combining both techniques of reconstruction in an innovative way can be used to achieve even greater successes in future cases with segmental bone loss. Both Masquelet technique and bone grafting are important means in overcoming bone deficits in a trauma patient. In our study, all the patients who underwent the surgery were doing weight-bearing and returned to the regular daily activities after 8 months. None of the cases developed infection nor limb length describes. There were able to perform the rom of the knee from 0 to 110 degrees by the end of the 8th month in 4 cases. Two case showed the late formation of callus and union compared to the others. In this case, they developed flexion deformity of 5 degrees by the end of the 8th month.

The authors declare that there is no conflict of interests regarding the publication of this paper.