Post-traumatic hip dislocation in a child less than 10-years-old: A rare case report

Traumatic dislocations in children are rare and hence are considered as an orthopaedic emergency. Most of the times, the nature of the injury is insignificant. Also, the trivial mechanism of damage leads to an increased potential for missing the diagnosis. So high index of suspicion is needed, as is clinical assessment and detailed imaging are vital in obtaining the correct diagnosis. The most commonly encountered and most catastrophic complication is Avascular Necrosis (AVN) of the femoral head; early concentric reduction is crucial in minimising this risk and optimising patient outcomes. Hip dislocations are primarily due to low-velocity energy; hence we take up this hip dislocation in a nine-year-old.

The musculoskeletal anatomy of children differs remarkably from that of adult anatomy. The bones are softer and more elastic, and the periosteum is much thicker and can absorb more force than its adult counterparts. Hence dislocations are more common in adults and are rare in the paediatric group. Most paediatric injuries are the result of low-velocity accidents. In high-velocity injuries, there is almost always the possibility of associated damages and multiple systems being involved. There have been case reports of traumatic hip dislocations in childhood, mostly in western countries.1, 2, 3, 4

A 9-year-old female child was brought to the casualty following a fall while playing on the playground. The history of the fall was one day old. She complained of severe pain in the right hip, and on examination, the right lower limb attitude was flexed, adducted and internally rotated at the left hip. A radiograph of the pelvis was taken, which showed left hip dislocation. The patient was admitted and right away posted for the procedure under short general anaesthesia. Closed reduction was achieved under fluoroscopic guidance. Postoperatively paediatric skin traction kit was applied with two kilograms weight. Check radiograph of the hip was taken to rule out any traumatic physeal injury. Follow up radiograph was taken after two days which showed no apparent changes in the head. High-risk consent given avascular necrosis was signed by the patient's parents, and they were instructed to follow up immediately if the pain returns. The patient was subsequently allowed complete activities without any restriction of motion. 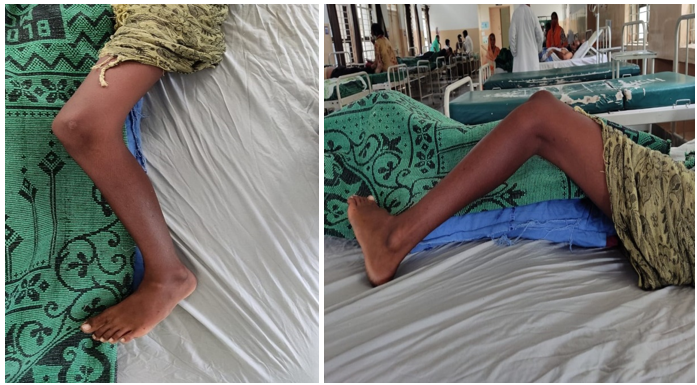 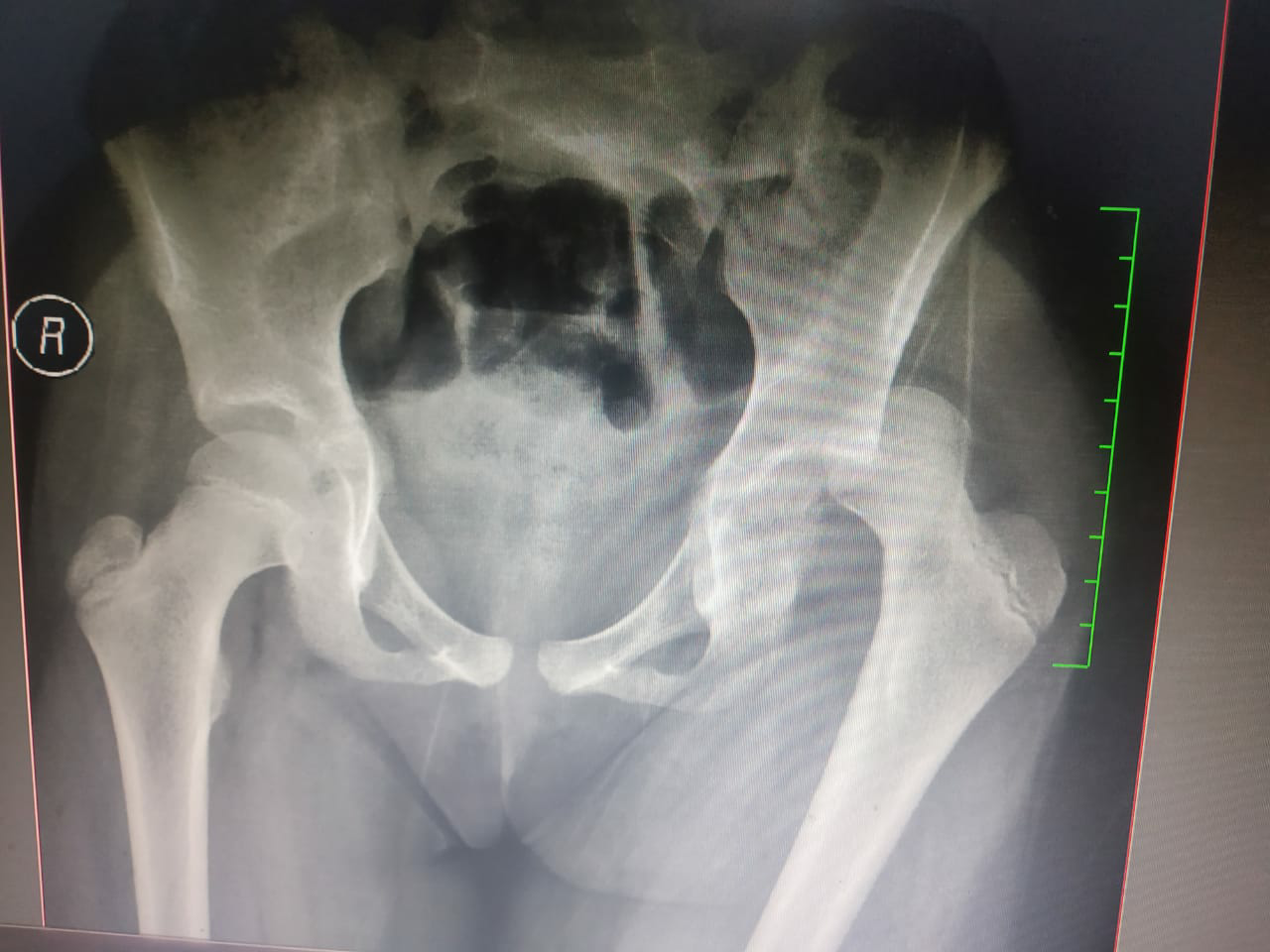 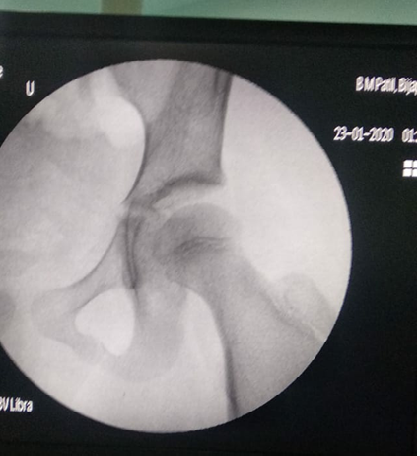 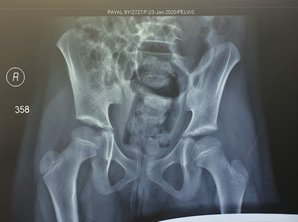 It is rare to find post-traumatic hip dislocation in the paediatric age group. Hip dislocations in children are primarily due to low-velocity accidents which Happen during daily activities such as jumping, playing.

Post-traumatic hip dislocations in adults and children are commonly posterior, more commonly in males than females.5 The classic clinical picture on presentation is of a shortened limb with the hip flexed, adducted, and internally rotated. On occasion, the patient can also present with isolated knee pain, referred from the involved hip.6, 7

Available literature advises the need for urgent congruent reduction within the golden period, which is six hours from the onset of trauma.3, 4, 6, 8 The risk of osteonecrosis in one study was 5.7% in acute cases, whereas 47.8% was observed in neglected instances5 which underwent closed reduction procedures.

The severity of the injury is also directly proportional to osteonecrosis. Also, during closed reduction, it is essential to be careful not to forcefully manipulate the joint as this dramatically adds to the risk of iatrogenic physeal separation. Gentle longitudinal traction with minimal external rotation is enough to reduce the joint usually, and the same was applied in our case.9

The method of immobilisation varies with the authors, from skin traction to plaster cast application.4, 8

The significance of early reduction is demonstrated by studies that recorded the incidence of AVN rises to over 65%, from the average of 8-10%, if the reduction is delayed beyond 24 hours after a dislocation.7, 9 The classic report by Mehlman et al. concluded that patients whose hips were reduced beyond the golden period had a twenty times increase in the risk of developing AVN. Moreover, AVN may develop up to three years following injury.6 Delays in diagnosis are commonly encountered not only due to the rare occurrence of the case and minimal Velocity of trauma but also due to associated injuries that may lead to neglecting the hip injury.5, 10 Several reports suggest a direct relation between AVN and time to reduction rather than with time to weight-bearing. It is important to note that a reduction within the golden period does not necessarily exclude the risk of avascular necrosis.6

In the available literature, reports of traumatic hip dislocations in children are available. Here we present a case report of traumatic hip dislocations in a child of a 9-year-old child. Hip dislocations are a medical emergency. It requires a reasonable suspicion based on history and presenting complaints to detect early and treat appropriately. Our patient had an excellent recovery and functional outcome because of early reduction. The soft tissues healed with immobilisation without the need for any further management.

No permanent disability was noted. We can therefore conclude that traumatic hip dislocations in children are a rare occurrence. Still, a careful inspection is a must for early diagnosis and treatment and to prevent further AVN.

The author declares no conflict of interest

S Bressan I P Steiner I Shavit Emergency department diagnosis and treatment of traumatic hip dislocations in children under the age of 7 years: A 10-year reviewEmerg Med J201431542531