Introduction: Intracapsular neck of femur fracture is a semi-emergency in patients below 60 years (mostly due to RTA) due to the precarious nature of blood supply, kinking of blood vessels between bone fragments, presence of angiogenesis inhibiting factors, and absence of cambium layer. Immediate internal fixation along with the preservation of the femoral head in this age group is mandatory to prevent non-union and avascular necrosis.

Materials and Methods: 26 patients of the 18-60 year age group with Garden type III and IV fracture neck of femur of 1-3 weeks old were included in the prospective study of 1 year (May 2020 to May 2021). Each group of 13 patients were treated with 3 CC screws and 2 CC screws with fibular graft respectively.

Intracapsular fracture neck of femur in young patients and those below 60 years are mostly due to high energy trauma. It is mainly due to the external rotation of leg, with increasing tension in anterior capsule and iliofemoral ligaments. As the neck rotates, the head remains fixed and fracture occurs resulting in posterior neck comminution. Common site of fracture is in the weakest part of the femoral neck, located just below the articular surface.1, 2 Lifetime risk of sustaining a hip fracture is 40-50% in women and 13-22% in men.3

Fracture neck of femur is a semi-emergency in younger patients due to the precarious nature of blood supply and kinking of blood vessels between bone fragments.4 As these fractures are intracapsular, the presence of angiogenesis inhibiting factors in synovial fluid and absence of cambium layer is one of the main causes of non-union.5, 6, 7, 8, 9 Hence, it requires immediate intervention and fixation to prevent non-union and avascular necrosis.

Sometimes, surgeries were delayed due to late presentation of patients (more than 1 week of trauma), overflow of patients (unavailability of OTs), and to correct comorbid conditions (anemia, hypertension, diabetes mellitus, etc.). Most of the patients attending the OPD in our institute used to present late (more than one week old). Due to previous experiences in our hospital and also going through the literature, we have found that delayed surgeries with 3 partially threaded cannulated cancellous (CC) screws used to show non-union and avascular necrosis at a higher rate. Keeping this view in mind, we thought of conducting a study to compare the functional outcome and complications of femoral neck fractures (more than 1 week old; but not more than 3 weeks old- neglected16 cases) treated with 3 CC screws and 2 CC screws with fibular graft.

This hospital based prospective study was cleared by Ethical Committee of the institute and informed consent was taken from all patients who met the inclusion criteria of the study. In a period of 1 year (May 2020 to May 2021), 26 patients (age 18-60 years) presented to us with Garden15 type III and type IV intracapsular fracture neck of femur (subcapital and transcervical) of more than one week and less than three weeks old. Patient selection for surgical procedure was done on the basis of opaque envelope method. During the time of surgery, grading of osteoporosis was done with the help of Singh index.17 Pathological fractures, acetabular fractures, associated femoral head dislocations, degenerative disorders, neurological cases were excluded. Fractures were close reduced under spinal anaesthesia with the help of image intensifier in anteroposterior and lateral views. Angulation and alignment were evaluated with the help of Garden alignment index.18 Fascia was split in line with skin incision 5-6cm distally over greater trochanter and vastus lateralis muscle fibres were split longitudinally. Inferocentral wire was placed around 1.5cm distal to the origin of vastus lateralis muscle. Two parallel guide wires were used to place one each in posterosuperior and anterosuperior cortex just short of articular surface. Drilling over inferocentral guide wire was done with sliding hip screw triple reamer for fibular graft placement (required length of fibula was evaluated by pre-operative neck length of the affected side in AP view and 10 mm was added to this for the length of fibular graft which was harvested from ipsilateral leg using standard posterolateral approach). Cannulated drill bits were used to drill over other 2 superior cortices followed by advancement of two 6.5mm partially threaded CC screws towards head fragment but not fully tightened. Fibular graft was placed over inferocentral cortex and hammering of fibular graft was done, along with final tightening of CC screws. The fibular fragment remaining outside the cortex of femur was trimmed. Wound was closed in layers. Antiseptic dressing was done. In cases, where 3 CC screws were used, instead of fibular graft, one 6.5mm partially threaded CC screw was used in inferocentral cortex and final tightening of screws was done simultaneously. Post-operatively, patients were given intravenous antibiotics for 5 days and oral antibiotics for another 7 days. Check X-ray of pelvis with bilateral hip AP view & involved hip lateral view was taken after surgery. Physiotherapy was given on 2nd post-operative day without weight-bearing in the affected limb. Wound was inspected on 3rd post-operative day. Suture was removed on 10th post-operative day. Patients were followed up at 6 weeks, 3 months, 6months, and 1year of surgery. Patients were examined clinically and radiologically. Functional outcome was assessed based on the Harris Hip score19, 20 and Kyle’s criteria.21 Toe-touch weight bearing was allowed after 3 months. Full weight bearing was given after clinico-radiological union. 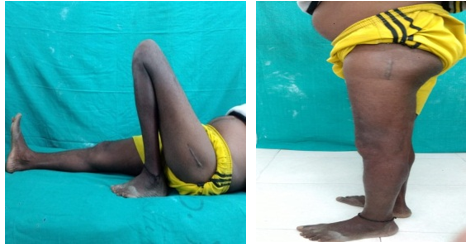 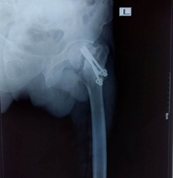 The statistical analysis of data was performed using the computer program, Statistical Package for Social Sciences (SPSS for Windows, version 20.0. Chicago, SPSS Inc.) and Microsoft Excel 2010. Results on continuous measurements are presented as mean ± standard deviations are compared using student t test. Discrete data are expressed as numbers (%) and are analysed using Chi square test and Fischer’s exact test (where the cell counts were <5 or 0). The statistical significance was fixed at 5% level (p value<0.05) for all analysis.

Intracapsular fracture neck of femur in patients below 60 years of age is prone to non-union and avascular necrosis. Hence, it requires immediate internal fixation to achieve anatomical reduction. In our study of 26 cases, each group of 13 patients were managed with 3 CC screws and 2 CC screws with fibular graft respectively. 65.4% of the cause of fractures was RTA involving the left side in most of the cases. Garden type III and IV constituted 42.3% and 57.7% of the fractures in the study. The mean age of patients was 52 years. Mean intraoperative blood loss was more in fibular graft cases (90mL) than cases treated with CC screws (60mL). The mean duration of surgery was 80 minutes in fibular graft cases. All patients were followed up for 1 year. Functional outcome assessment was done on the basis of Harris Hip Score and Kyle’s criteria. The mean time to fracture union was 15weeks (3.75months) in the fibular graft group and 22.75 weeks (5.7months) in a group of CC screws (P = 0.028). In the treatment group of 3 CC screws, good-excellent functional outcome was seen in 83.3% and 28.6% cases of Garden type III and IV fractures respectively; 16.7% poor and 71.4% fair-poor outcome was seen in Garden type III and IV fractures respectively. In the treatment group of 2 CC screws with fibular graft, 100% of cases achieved good to excellent outcomes. There were 1 and 3 cases of non-union seen in Garden type III and IV fractures respectively treated with CC screw (P=0.025); and 2 cases of delayed union in Garden type IV fractures treated with 3 CC screws. Post-operatively, shortening of less than 1.5 cm was seen in 5 cases (3- CC screw and 2- fibular graft). There were 4 cases of infections (3-superficial, 1-deep) and 2 cases of infections (1-superficial, 1-deep) in CC screw and fibular graft treatment groups respectively which subsided after adequate intravenous antibiotic therapy. There was no evidence of avascular necrosis (AVN), donor site morbidity, and nerve injury in the study- till one year of follow-up.

Fibular bone graft has certain advantages as it prevents subchondral collapse, acts as a biological implant, and as a channel for revascularization. Because of its trephine shape, it helps in achieving anatomic reduction, fuses with the host bone, and is replaced by the trabecular pattern of cancellous bone. It provides an osteogenic environment for fracture healing without jeopardizing in precarious blood supply to the femoral head in all femoral neck fractures presenting late in young patients.25, 26 Free fibular graft provides structural support and with the passage of time, it gets incorporated with the host bone. Harvesting of the fibula may lead to some minor donor site morbidities such as ankle swelling and mild pain after walking long distances.27 However, in our study, we didn’t get such complaints from the patient.

In our 1 year of study, 2 CC screws with fibular graft were proved to be more effective than 3 CC screws in the treatment of cases of femoral neck fractures presenting late as it achieves union faster with minimal complications. Fibular strut graft facilitates bone regeneration and subchondral placement prevents femoral head collapse. We didn’t get any evidence of AVN of the femoral head in the period of 1 year. This study needs to be followed for longer period of time to comment on AVN of the femoral head.

PA Banaszkiewicz Traumatic arthritis of the hip after dislocation and acetabular fractures: treatment by mold arthroplasty: an end-result study using a new method of result evaluationClassic Papers in Orthopaedics2014SpringerLondon137