Introduction: Distal humerus fractures constitute 2 to 7% of all the elbow fractures. Young males are most commonly affected due to high energy trauma and secondly seen in elderly women due to osteoporosis. Due to complex anatomy and neurovascular network nearby, the treatment is very difficult. Anatomical reconstruction is the key for successful functional outcome. We compared the TRAP and olecranon osteotomy approach for the management of intraarticular fractures of the humerus in terms of functional, clinical and radiological outcome.

Materials and Methods: The study was conducted in the Department of Orthopaedics & Traumatology, MGM Medical College and MY Hospital, Indore from August 2019 to August 2021 on 30 patients with intra-articular fractures of humerus. 15 patients were treated with olecranon osteotomy and 15 patients were treated with TRAP approach, on patients fulfilling all the inclusion, but none of the exclusion criteria. The functional outcome was measured using Mayo Elbow Performance Score (MEPS) and radiographs were used for evaluating the bone union time.

Results: There was a male predominance. Assault, fall and road traffic accidents were the modes of injury. 13-B2, 13-C1 and 13-C3 were commonly seen fracture types. Mean MEPS was significantly better in TRAP (P<0.05) and full triceps strength was achieved in 86.7% patients by 3 months in TRAP and by 6 months in olecranon osteotomy group. The mean blood loss and duration of surgery was significantly longer in olecranon group (P<0.05). The bone union time and hospital stay were comparable between the groups (P>0.05). 73.3% patients of TRAP and 64.3% patients of olecranon osteotomy group achieved excellent outcome by 6 months.

Conclusion: TRAP approach is comparatively better than osteotomy approach. Both the methods provide a stable fracture fixation, but complications are more in osteotomy in comparison to TRAP and we found TRAP to be functionally better.

Approximately, 2% to 7% of all adult fractures involve the elbow are distal humeral fracture. The most common, pattern is, an extra-articular fracture accounting for 40%. Bicolumnar or complete intraarticular fractures, are the second most common accounting for 37%. These injuries occur in a bimodal distribution, with an early peak in young males, twelve to nineteen years of age as a result of high-energy trauma. A second peak in elderly women, with osteoporotic bone, as a result of simple fall. This fractures of elbow are the most difficult one to treat due to poor assessment of the this fractures with traditional approach and its complex anatomy and passing by neurovascular bundles.1 Anatomical reconstruction of the articular surface and stable internal fixation are the key factors for successful functional outcomes. Adequate exposure of the articular surface is a prerequisite for anatomic reconstruction and stable fixation of these fractures.2

To better visualize the articular surface, olecranon osteotomy, Bryan-Murrey (triceps reflecting), triceps splitting and triceps-reflecting anconeus pedicle (TRAP) approaches have been used. TRAP approach, as defined by O’Driscoll et al.3 This approach is a combination of modified Kocher and Bryan-Morrey, mobilizes the triceps and anconeus muscle of the posterior humerus and proximal ulna, and also provides adequate exposure of distal humerus.

The indications and superiority of these two techniques are a question of debate. In the literature, there are limited numbers of studies on this issue. The current study aimed to compare the TRAP approach with olecranon osteotomy regarding their effects on the functional results of intercondylar humerus fractures treated with open reduction and internal fixation (ORIF).

The present prospective, comparative study was conducted on 30 patients with intercondylar fracture humerus during a study period from August 2019 to August 2021 fulfilling the inclusion and exclusion criteria. The approval for the conduct of the study was obtained from the Institutional Review Board. Also prior to the inclusion of any patient in the study, a voluntary written informed consent was obtained from each patient.

Olecranon osteotomy in the treatment of comminuted distal fractures of the humerus which involve the articular surface has been found to be valuable. But by doing this, the complexity of the procedure increases and also has its own complications.5

In our study, patients were randomized to either groups – TRAP or osteotomy based on odd and even method of randomization for any type (13B, 13C) intraarticular fracture humerus.

All the patients and/or his/her legally acceptable representative were explained about the study in detail in their own language. After obtaining a verbal consent for participation in the study, a voluntary written informed consent was obtained from them. All study related procedures were conducted after obtaining the voluntary written informed consent.

All the patients underwent routine physical and clinical examination. Preoperative hematological examinations and anesthetic checkup was done prior to the surgery. All surgeries were done under general or regional anesthesia. Surgery was performed in lateral position and under sterile tourniquet.

A straight posterior incision is made lateral to the olecranon tip, approximately 10cm proximal and 8cm distal. Medial and lateral skin flaps were raised to expose the supracondylar ridges on either side of the distal humerus. The ulnar nerve was initially localized proximally, where it emerged beneath the triceps tendon. To increase the mobility of ulnar nerve, the distal aspect of intermuscular septum was released. Anconeus triceps flap was detached from its distal attachment. Reduction of intra-articular component was done, followed by reduction of reconstituted condylar block and was fixed to the medial and lateral columns using Kirschner wires and precontoured anatomical plating done. Additional fixation was given by placing the long lag-screws from the medial or lateral epicondyles. To confirm the adequacy, intraoperative photographs were taken. Triceps and anconeus were reattached with sutures and holes were drilled through the bone in the region of olecranon.

The surgical steps followed in olecranon osteotomy are same as triceps reflecting anconeus pedicle approach, with an additional osteotomy. The site of osteotomy was identified after incising the medial capsule after retracting the ulnar nerve or lateral capsule, after elevating the part of anconeus muscle and finding the center of trochlear notch. Osteotomy was performed 2cm distal to the tip of olecranon using an oscillating saw. Osteotomy was completed using osteotome by levering the osteotome proximally. This causes in cracking of subchondral bone and uneven surface is created that facilitated reduction. After incision of posterior elbow capsule, joint was reached. Fragments reduction was done using temporary K-wires and precontoured anatomical plating done. Proximal fragment of the olecranon was repositioned. Fixation was obtained using a tension band over 2 Kirschner wires and wound was closed. We had preferred Chevron osteotomy as it provides stable bony contact during the repair of the olecranon reduction. The bone healing improved because of larger surface and shape improved the rotational stability.

After successful surgery and stabilization the patients were discharged home with instructions to review on regular follow-ups.

During the postoperative period, patients followed the protocol given below:

The Mayo Elbow Performance Score (MEPS) used 4 subscales - pain; range of motion (arc of motion of the art. humeroulnaris); stability and daily function to evaluate the limitations caused by pathology of the elbow during performing the activities of daily living (ADL). And is rated on a scale of 100. A score of <60 is poor; 60-74 is fair; 75-89 is good and above 90 is excellent.6

The statistical analysis was carried out using GraphPad and Epi Info. The comparison of mean within the groups was done using Paired ‘t’ test and association between two non-parametric variables was done using Pearson Chi-square test. A p value of < 0.05 was taken as statistically significant. 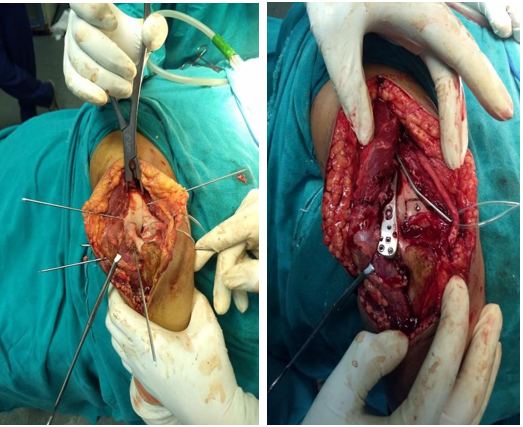 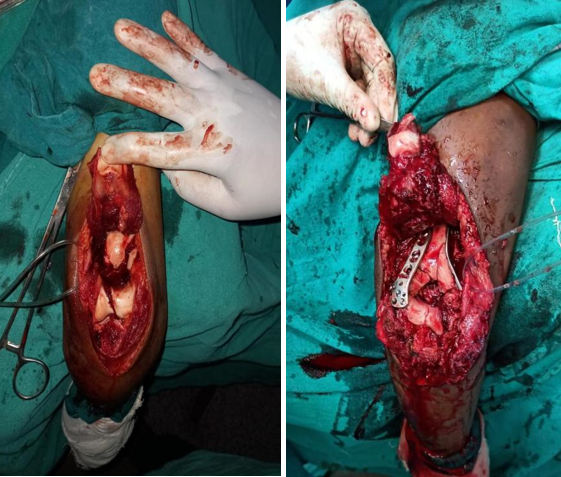 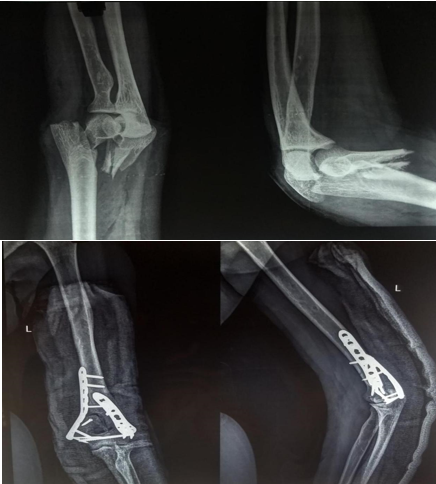 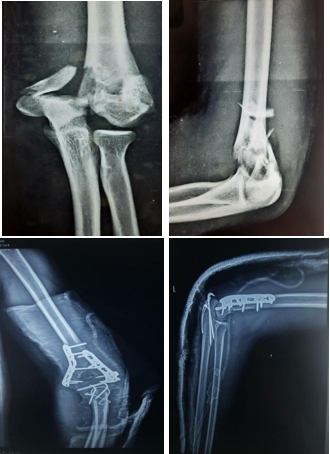 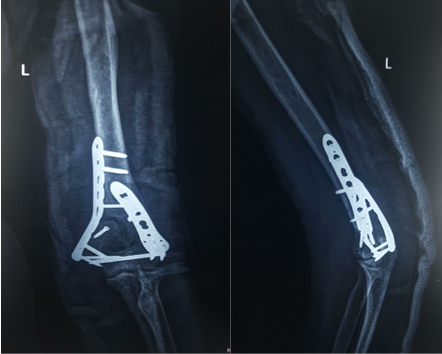 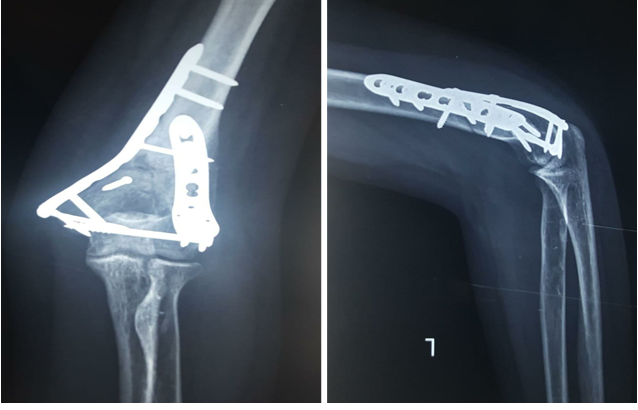 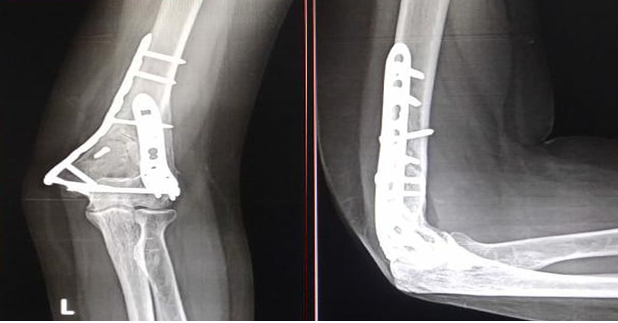 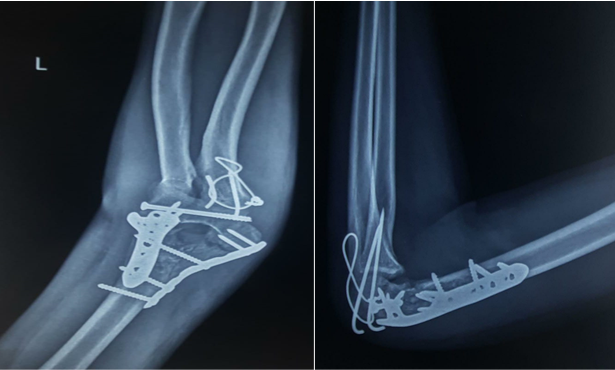 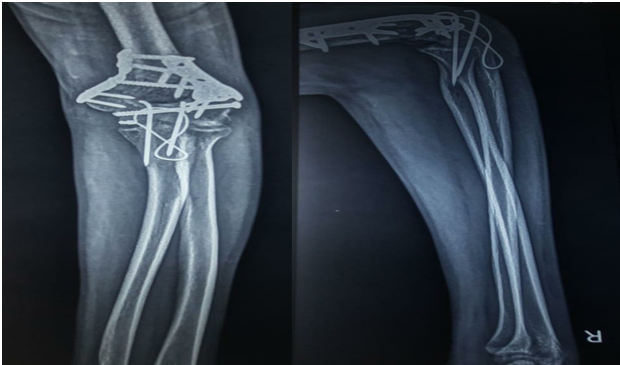 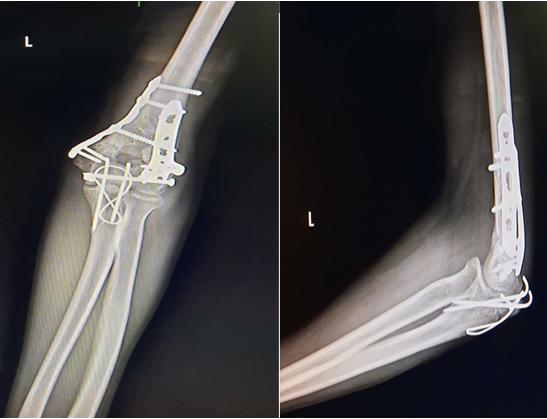 Comparison of final outcome based on MEPS

Comparison of final outcome based on MEPS 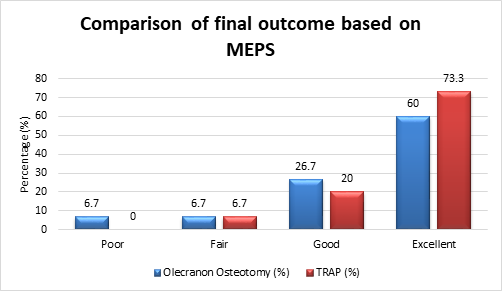 The present study showed that Triceps Reflecting Anconeus Pedicle (TRAP) method is better than olecranon osteotomy in terms of overall Mayo Elbow Performance Score (P<0.05) as well as all its subscales were better in TRAP method in comparison to olecranon osteotomy (P<0.05).

The mean suture removal time was comparable between the two groups (P>0.05).

Full triceps strength was achieved in 86.7% of TRAP group patients by 3 months, while it took 6 months for 86.7% patients of olecranon group to achieve full triceps strength. The mean bone union time was comparable between TRAP group andolecranon osteotomy groups (P>0.05). Mittal et al10 in their study reported a mean bone union time at or before 6 months in majority of their patients, and in some patients, they found union at 9 months; while in our study the union was achieved in both the groups by 11 weeks, that is earlier than that reported by Mittal. Another study by Pankaj et al4 reported mean bone union time of 3.2 ± 1.6 months, which is comparable to our study findings.

The Triceps Reflecting Anconeous Pedicle (TRAP) was found to be better in comparison to olecranon osteotomy for the management of intercondylar fracture humerus.

The limitation of the study is that we had included only 15 patients in each group, a larger sample population would have provided a better picture of the outcome. But from the available data, we feel that for the management of intercondylar fracture humerus, Triceps Reflecting Anconeous Pedicle (TRAP) is better.

Triceps Reflecting Anconeous Pedicle (TRAP) is better in comparison to olecranon osteotomy approach for the management of intercondylar fracture humerus, with lower blood loss and operative time. While the hospital stay and bone union time were comparable. Mayo Elbow Performance Score is comparatively better in TRAP in comparison to olecranon osteotomy. Both the methods provide a stable fracture fixation, but complications are more in osteotomy in comparison to TRAP and we found TRAP to be functionally better. We highly recommend the use of TRAP for the management of intercondylar fracture humerus.