Saraf and Munot: Knee replacement surgery is more precise with "Robotic Technology"- Is it true?

Knee replacement surgery is more precise with "Robotic Technology"- Is it true?

Background: Robotic assisted total knee arthroplasty is one the recent advance to improve its outcome especially to address the issue of precision. Longetivity of TKA primarily depends on proper implant alignment. The Aim of this study is to compare the precision of robotic assisted TKA with the ideally planned mechanical parameters in TKA.

Conclusion: Study shows promising results with near normal execution of planned TKA. Robotic assisted TKA can be a game changer and a handy tool to improve the alignment of mechanical axis in TKAs.

Total knee arthroplasty (TKA) is one of the very successful and widely done surgery. Since osteoarthritis becomes more severe with growing age, number of TKA surgeries is on the rise and main reason behind the growing number is the increase in life expectancy globally.1 The number of TKA performed in the last two decades has increased with 162%.2

With every passing year, there has been lot of research on different aspect of TKA like functional outcomes, implant material, implant design, knee dynamics, knee alignment. But since early days and until now orthopaedic community is very much interested in increasing the longetivity of TKA. Many crucial factors have been studied for longetivity including implant chemistry, design, cementing technique, post-operative knee alignment either kinematic or mechanical.3

Post operative knee alignment can be a major factor that can decide long term survivorship of TKA. Today it is widely accepted that a précised and well aligned TKA will definitely last longer than poorly aligned TKA that leads to shorter life span of implant.4, 5

A total of 50 patients reviewed retrospectively who were operated between august 2018 to August 2019. Informed consent were obtained from all the patients before their inclusion in this study.

After preparation of femur and tibia, trial can be put and checked for FFD, coronal deformities, range of motion, instability in post op gap assessment screen.(Figure 1 H) Fine changes can be done at this stage as well to achieve satisfactory alignment. 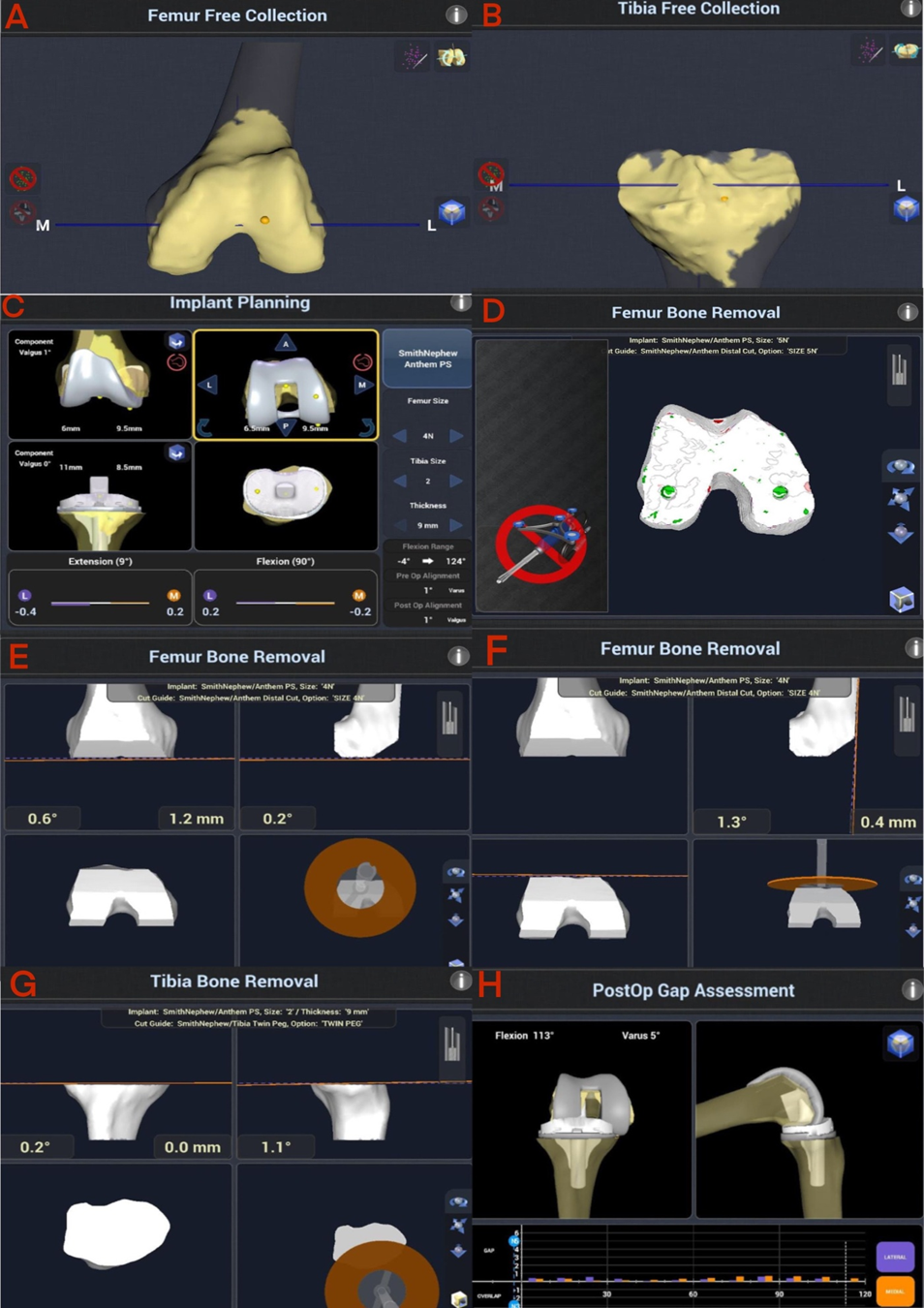 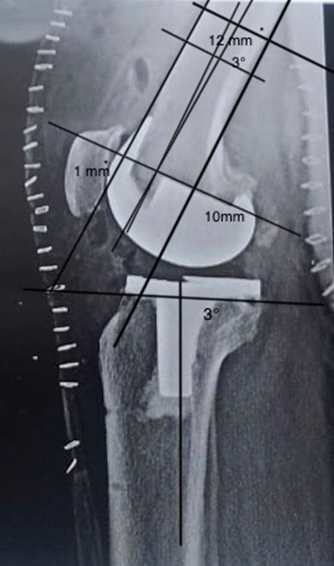 One of the basic requirements to achieve well aligned knee in TKA is to restore mechanical neutral axis of the lower limb. Ideally intraoperative correction of limb alignment should be within 00 ±30 of mechanical axis.6 Studies by Ritter et al7 and by fang et al8 in 6070 TKA with mean follow up of 8 years showed increased rate of failure with post-operative varus malalignment of anatomical tibiofemoral axis(TFA) < 2.50 and valgus malalignment (TFA > 7.50). Similar results were seen in study by Kim et al9 in which he demonstrated increased failure rate in post operative varus malaligned knee (TFA<30) compared to neutrally aligned knee (TFA30-7.50). In our study we are able to achieve mFTA of 0.15 ±0.7 with only 4% outliers using robotic assisted system.

Femoral component coronal alignment should be within ±20 of femoral mechanical axis(FMA). A study by longstaff et al10 reported that patients with neutral femoral alignment (±20 of FMA) had better KSS scores at 1 year follow up. Similarly tibial component should be put in 900to the mechanical axis.11 Tibial malalignment of >30 of varus has been reported to increase the risk of medial bone collapse.12 In the current study achieved LDFA is 89.78±0.79 and mPTA is 89.80±0.86 which is almost neutral with fewer outliers (LDFA-6%, mPTA-4%).

Sagittal alignment of femoral and tibial component is also important for implant survival, stability, and flexion gap and post operative flexion. Kim et al. showed 3.3% failure rate in knees with femoral implant flexed > 30 compared to failure rate of 0% and 0.9% in neutrally aligned femoral component (00-30 flexion) and extended femoral component (>10 extension) respectively. In the same study it was found that tibial malalignment in the sagittal plane (<00 or >70) had failure rate of 4.5% as compared to a failure rate of 0.2% in the neutrally aligned group.9 In our study planned femoral flexion is 30 and tibial slope is also 30 (another 30 slope within implant). Achieved femoral prosthesis flexion is 3.03±0.35 and achieved tibial slope is 3.14±0.60.

Technology plays an important role in execution of planned surgery. Options like computer navigation, robotic assisted TKA increase the precision to near normal. In this current study we used navio system based on robotic arm assisted technology in which cuts can be planned, executed, rechecked and if required again corrected to the desired planned cuts. Even 10 or 1mm of correction can be done precisely using this technology. A recent study by casper M et al. who studied accuracy of handheld robot system for TKA in 18 cadavers concluded that absolute mean tibial and femoral error were within 1 mm of neutral.13 In a comparative study by Bollars P to study implant alignment and outliers in navio TKA group with conventional TKA group, they demonstrated lower rate mechanical axis outliers in navio TKA group (6% vs 18%) P=0.051). Navio TKA group had significantly reduced rate of outliers in the frontal tibial component (0% vs 8% P= 0.038) and improved post operative mechanical axis (180.1 vs 179.1 P=0.028) compared to conventional TKA group.14

Robotic TKA not only allow the surgeon to plan the TKA cuts precisely but also help in execution, rechecking, refining, reproducing same results with minimal error to achieve the planned mechanical axis of the limb. Robotic TKA definitely hold the key in future for the successful and precise implementation of TKA.

K Gromov M Korchi MG Thomsen What is the optimal alignment of the tibial and femoral components in knee arthroplasty?Acta Orthop2014854807