Materials and Methods: The present Prospective Comparative study was conducted at the Department of Orthopaedics, MSDASMC, Bahraich, over 24 months, from June 2019 to June 2021. Intertrochanteric fractures were treated randomly, whether using the Dynamic Hip Screws (DHS) or the proximal femoral nail (PFN). Out of a total of 60 cases, all of them were included. A group of 30 patients was separated into two groups: the first group received 30 Dynamic Hip Screws, while the second group had 30 PFN. Every patient was followed for nine months after their treatment.

Results: In our study, the mean Age in the PFN group was 62.5 ± 4.26, while in the DHS group, it was 63.7 ± 3.78 years. In the present study, a higher Harris Hip score (HHS) was observed in PFN groups. Their intergroup comparison of Harris Hip score between PFN and DHS group revealed significant differences at each follow-up. Furthermore, the minimal blood loss, duration of surgery, and incision size was low in the PFN group, and the difference was statistically significant compared to the DHS group. Mean hospital stay also showed no significant differences.

Conclusion: In the intertrochanteric fracture of the femur, the PFN is a more suitable fixation approach. To the extent that it will further the generalizability and dependability of the research, the demand will be granted.

Additionally, numerous studies have been conducted comparing the outcome of intertrochanteric fractures treated with a dynamic hip screw against a proximal femur nail. The goal of treatment for these fractures is stable stabilisation, which enables the patient to be mobilised faster. These fractures have a high rate of morbidity and mortality. Co-morbid medical issues such as diabetes, hypertension, pulmonary, renal, and cardiac diseases all contribute to the fracture's insult. Elderly individuals are at risk of developing potentially fatal consequences such as hypostatic pneumonia, catheter-associated sepsis, cardiopulmonary failure, and decubitus ulcer. 3

All of the circumstances outlined above necessitate the use of an urgent surgical remedy to expedite the patient's recovery and mobilisation. The purpose of this study was to compare the dynamic hip screw (DHS) and proximal femur nail (PFN) treatments in order to determine whether the method is better in terms of patient compliance and long-term recovery.

This prospective comparative study was undertaken from June 2019 to June 2021 in the Department of Orthopaedics, MSDASMC, Bahraich. The research institutional review board approved the study procedure for ethical considerations. After taking a history and performing a physical examination, cases were recruited from Orthopaedics OPD/emergency. The study included cases that were surgically fit and over the age of 50 with an isolated intertrochanteric fracture. The following patients were excluded from the study: those with pathological fractures caused by metastases or tumours, those with compound fractures or polytrauma, and those who did not provide informed consent. Each case was thoroughly reviewed before to surgery, including a detailed history to ascertain the origin of the fracture and underlying disorders.

A pelvic radiograph was performed with both hips and a lateral view of the afflicted Hip. The fractures were classified using the Orthopaedic Trauma Association (OTA) and American Orthopaedic Association (AO) classification systems. In all cases, skin traction was used. Each patient with intertrochanteric fracture was randomly assigned to receive either a Dynamic hip screw (DHS) or a Proximal femoral nail (PFN). The goal and significance of the study were communicated to the recruited cases. After receiving informed and written agreement, those wanting to participate were included in the study. There were a total of 60 cases included. The patients were further separated into two groups: 30 received Dynamic Hip Screw treatment, and 30 received proximal femoral nail treatment (Figure 1). Nine months of follow-up was performed on all patients. A physician examined each case for surgical suitability. If any associated medical issues were identified, they were corrected prior to surgery. All patients were clinic-radiologically examined at the follow-up interval of 1, 3, 6, and 9 months. Implants that were used are shown in the following table: 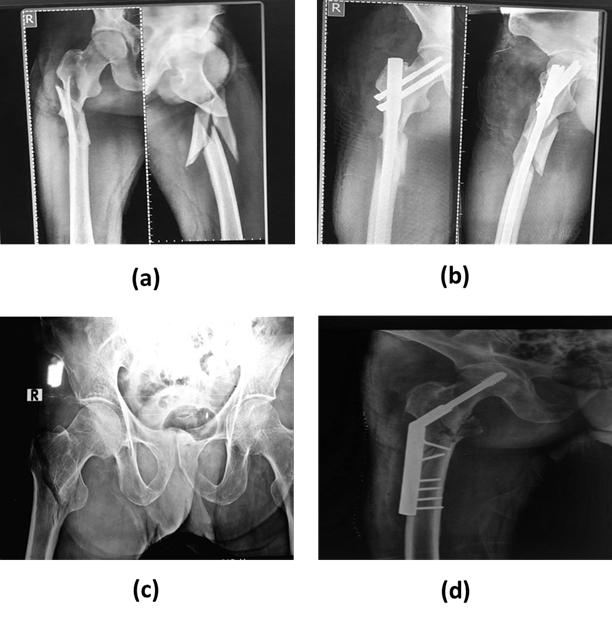 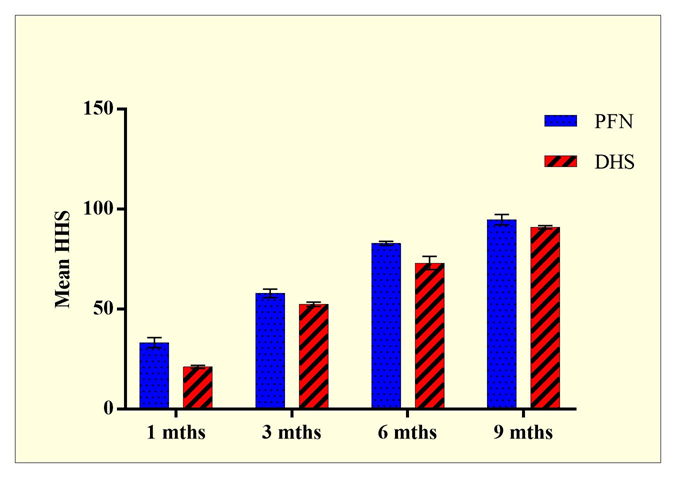 Distribution of subjectsaccording to age

The distribution of patients as per fracture type showed significant differences (p<0.0001) among PFN and DHS groups (Table 3). The mean HHS scores gradually increased in both groups. However, group PFN showed a higher HHS score as compared to the PFN group. Additionally, substantial changes were identified at each follow-up. (Table 4, Figure 2)

Distribution of subjects according to fracture type

Comparison of the general/clinical parameter(Hospital Stay) between the groups

Comparison of complications between the groups

Intertrochanteric fractures have increased in recent years as life expectancy has increased. Numerous studies have compared the outcome of intertrochanteric fractures treated with a dynamic hip screw (DHS) vs a proximal femur nail (PFN). The purpose of this study was to compare the outcomes of dynamic hip screws and proximal femur nails and compare the procedures themselves to determine which treatment is superior in terms of patient compliance and long-term recovery.

Management of Intertrochanteric fractures continues to be connected with a high number of failures. The reason is linked to the fracture's biomechanics and surgical method factors and the high-stress concentration caused by various deforming forces. Numerous years of study have been conducted to determine the optimal implant technology for the fixing of Intertrochanteric fractures, which are more prevalent in senior individuals. However, the optimal implant has not yet been developed. From Smith-Peterson (1960) until the present, research has been conducted. The PFN was developed in the early 1990's with biomechanical advantages over DHS and has since gained popularity. PFN was not without difficulties; mechanical failures continue to be a major source of concern.4, 5 One way to considerably reduce mechanical failure is to place screws in the "safe zone," as Herman et al.4 demonstrated. Numerous studies have demonstrated that PFN offers a number of advantages over DHS.6, 7 The purpose of this study was to compare the management of trochanteric fractures using a sliding hip screw (DHS) and an intramedullary nail device (PFN). Its research is based on northeast region of Uttar Pradesh. This region come under backward area, and most patients are neglected and came hospitals after 2-4 weeks. In these patients, PFN and DHS also gave good outcomes. Also, still limited studies was found, especially in the north-east population of India. So, we prefer to research on that topic.

The mean age of the PFN group was 62.5 ± 4.26 years, whereas the DHS group was 63.7 ± 3.78 years. This was similar to the findings of Shakeel et al. (2018),2 Ranjeetesh et al.6 and Kumar et al.8 A similar finding was observed in a study conducted by Cyril et al. (2015),9 in which they compared the functional and radiological outcomes of PFN versus DHS in the treatment of Type II Intertrochanteric fractures. Thirty alternative examples of type II intertrochanteric hip fractures were examined utilising PFN or DHS. The average age of fractures seen was approximately 60 years. Harrington et al.10 Hunter GA,11 Kuderna et al.12 Poigenfurst et al.13 Laskin et al.,14 Hall et al.,15 Saudan et al.16 Tyllianakis et al.17 Zickel et al.18 and Cuthbert et al.19 have all reported a greater age at presentation. Males constituted the majority of cases in both groups in the current investigation. This was consistent with the findings of Shakeel et al.2 and Jonnes et al.5 In comparison, Mundla et al.20 found that out of 60 patients, 27 (45%) were male and 33 (55%) were female. Females are disproportionately affected. Similar findings were made by Kumar et al.7 Harrington and Johnton,10 Kuderna et al.12 Poigenfurst and Schnable,13 and Laskin et al.14 also indicated a predominance of the female sex. Males are more susceptible to road traffic accidents, which reflects the study's predominance of males.

While Kuderna et al.12 found a higher rate of stable fractures, the current study revealed a 50% occurrence of both stable and unstable fractures, similar to Shakeel et al.[2] In the current study, the majority of 29 (72.5%) of patients in the PFN group had 31–A3 fractures, while 7 (17.5%) had 31–A2 fractures and the remaining 4 (10.0%) had 31–A1 fractures. In the DHS group, the majority of patients (24 (60.0%) had 31–A2 fractures, while the rest 16 (40.0%) had 31–A3 fractures. None of the individuals in the DHS group exhibited fracture type 31-A1. Between the two therapy groups, a significant difference in fracture type was detected. Similarly, Cyril et al.8 examined the functional and radiological outcomes of PFN and DHS in the treatment of Type II intertrochanteric fractures.

Thirty alternative examples of type II intertrochanteric hip fractures were examined utilising PFN or DHS. The average age of fractures seen was approximately 60 years. The kind of fracture had no statistically significant association with the DHS or PFN groups. Type II fractures accounted for the majority of 60 occurrences (18 instances), followed by type III fractures (16 cases).

Thirteen cases involved fractures of type I and IV. Kumar et al.6 conducted the study5 examined the result of 50 patients treated with DHS and PFN for intertrochanteric fractures. The average operating time was 55 minutes for patients treated with PFN versus 87 minutes for patients treated with DHS. Zhao C et al. (2009)20 reviewed the characteristics of the proximal femoral nail and dynamic hip screw used to treat type A1, A2, and A3 intertrochanteric fractures after evaluating 104 cases. Suranigi et al.21 conducted a study in which the most prevalent type of fracture was discovered to be type II. There were no fractures with a Type I pattern in their study. Similarly, Ravi et al.22 observed that 60% of patients had type II fractures.

The PFN group had a higher HHS score in the current investigation, and an intergroup comparison of the Harris Hip score between the PFN and DHS groups revealed significant differences at each follow-up period. Ranjeetesh et al.6 discovered a similar finding in their study. They examined the outcome of 50 patients who had intertrochanteric fractures treated with a Dynamic Hip Screw against a Proximal Femoral nail. The results indicated that patients treated with PFN began ambulating earlier because they had a higher Harris Hip Score in the early period (at 1 and 3 months). A similar finding was observed in a study conducted by Chaitanya et al.23 (2015) in which they compared the results of Intertrochanteric fractures treated with DHS versus Proximal Femoral Nailing. Total 60 patients with intertrochanteric fractures were treated using a sliding hip screw with a plate and an intramedullary hip screw. Between one month and one year, the Harris hip score did not change much in either group. Harris hip scores for DHS and PFN were identical at six months and one-year follow-up.

In this study, the PFN group experienced less blood loss, a shorter length of operation, and a smaller incision size than the DHS group. Similar findings were observed in a study conducted by Shakeel et al.,2 Ranjeetesh et al. (2012)6 in which the result of 50 patients with Intertrochanteric fractures treated with Dynamic Hip Screw and Proximal Femoral nail was compared. The average blood loss in the PFN and DHS groups was 100 and 250 ml, respectively. A similar conclusion was reported in a study conducted by Chaitanya et al. (2015),23 who examined the results of DHS with PFN for intertrochanteric fractures. Sixty patients with intertrochanteric fractures were treated with a sliding hip screw and a plate, and thirty with an intramedullary hip screw. The mean blood loss in the PFN group was 96 ml, while the mean blood loss in the DHS group was 233 ml.

However, the limited sample size and single-centric study design were limitations of the present study. The author demanded for additional multicentric studies with a large sample size to increase the reliability and generalizability of the current findings.

Authors declare no conflict of interest.