Materials and Methods: 50 patients planned for surgical discectomy, were randomized by selecting every alternate case for either ED or MD, and their outcomes were compared on basis of Pain relief by VAS at pre op and at 6 months POD, difference in surgical time, complications, number of days of stay at the hospital, patient satisfaction assessment and time to return to work.

Conclusions: Both the techniques are effective and safe for lumbar discectomy, but when it comes to patient satisfaction and return to work, endoscopic method has a slight advantage whereas in levels above L4/L5 and far lateral discs, microscopic technique is the technically better choice.

Intervertebral disc prolapse is defined as a localized displacement of disc material beyond the limits of the intervertebral disc space.1 While herniated discs can also be treated non operatively, few may require surgical treatment for nerve root and thecal decompression. In 1934, lumbar disk herniation was the first condition treated surgically by performing an open laminectomy and discectomy.2 Since then, there has been an increasing demand for lesser invasive techniques as it reduces the collateral damage to surrounding structures and minimizes the chances of subsequent spinal instability. With the introduction of the microscope, the open lumbar discectomy was refined into open microdiscectomy, 3 since which a variety of minimally invasive (MI) techniques have been developed. In the 1990s laparoscopic surgical techniques began to be adopted clinically and anterior endoscopic approaches started being considered by some to offer possible advantages for the treatment of thoracic and lumbar disc disease.4, 5

Laparoscopic lumbar discectomy was performed with an approach similar to laparoscopic abdominal surgery: pneumoperitoneum was established, and the small bowel and colon were retracted to provide access to the lumbar disc.4, 5 But since anterior Endoscopic approaches were associated with its share of disadvantages,6 retroperitoneal endoscopic discectomies started gaining popularity. This was furthermore refined with the development of improved endoscopes and instruments, the increased experience of endoscopic spine surgeons, and the continued demand by patients for spinal surgery procedures that are as minimally invasive as possible.

Minimally invasive techniques provide a similar treatment to open discectomy for prolapsed disc with a smaller incision and better cosmetic results and reduces damage to the surrounding structures.7, 8 But the relative benefits and risks of these techniques have not been well established. There is a dearth of evidence comparing these minimally invasive techniques and it is less known if their actual benefits supersede over eachother, specially in an Indian population.

Hence in this study, our aim is to compare the outcomes of Microscopic and Endoscopic procedures in the Indian population which will help in choosing the optimal management for prolapsed intervertebral discs.

The study was conducted in a tertiary care centre in Kerala over a period of 3 years. Fifty patients who were treated surgically for lumbar disc herniation were included in the study.

Patient selection: Randomization was performed in selection of patients with every alternate case posted for MD and others for ED.

All operations were performed by a single surgeon, who had experience in both techniques. 25 patients in each group were operated at L3/L4, L4/L5 or L5/S1 level.

All the patients operated for lumbar disc prolapse at L3/L4,L4/5 and L5/S1 levels at a single level.

Removal of all the herniated and loose disc material, to achieve adequate root decompression, and minimize the collateral damage to normal tissue.

A detailed history of the illness was obtained and clinical examination was done in all patients. Preoperatively neurological involvement was assessed and correlated with the radiological findings. Distal pulsations were examined in all patients.

Magnetic resonance imaging was obtained for all patients. MRI findings regarding migration of the disc material, location of the disc herniation and spinal canal stenosis were noted. All patients in this study underwent adequate conservative management. Non operative treatment included short period of bed rest for 2 to 4 days, physical therapy under guidance of physiotherapist, non-steroidal anti-inflammatory drugs with muscle relaxants and lower back exercises as soon as patient became comfortable. A short course steroid was used if needed, for radicular pain.

Post-operative Analgesia was achieved with Opiods and NSAIDs

Oxcarbamazepine was used to control neuralgic pain, if needed Intravenous antibiotics were given for 3 doses. (Inj. Cefuroxime 1.5mg).

All patients were ambulated as soon as the patient is comfortable, usually the 1stpost operative day. All patients were advised on discharge to avoid prolonged sitting, lifting heavy weights, prolonged travelling in sitting position and to walk for 30 minutes daily along with continuation of medications and nutritional supplements as needed.

Post-operatively, number of days of stay in hospital and time to return to work was noted.

All complications we came across in the study whether intra- operative, immediate post-operative or late postoperative were noted.

Patients were followed-up on 10th post-operative day for suture removal, followed by at the end of one month, at the end of three months, then six months and finally twelve months. During follow up examination, patients were inquired about residual pain and neurological assessment was done. In addition to general parameters, other information was obtained using the following instruments: a Visual analogue scoring (VAS) for back and leg pain, and the Oswestry Low Back Pain Disability Questionnaire (ODI).

Statistical 2 way and 3 way tables were prepared for comparison and primary analysis. Also, various statistical tests like Students t-test, Chi-square test and Kolmogorov Smirnov test, were used to identify the sample. A positive significance level was assumed at probability of less than 0.05.

The levels of disc operated for both the groups has been mentioned in (Table 1).

On comparing both the surgeries in terms of Surgery time, the mean time for endoscopic discectomy is 81.4 minutes (SD=15.38) and for Microdiscectomy is 85.20 minutes (SD= 19.36). But statistically, there is no significant difference in the Average Operation Time in Microscopic and Endoscopic procedure. (p value=0.6484) (Table 3)

In terms of complications, there were no recurrences in endoscopically and microscopically operated patients. Although all the patients had 3+ gross motor power preoperatively, one patient in endoscopy group had a foot drop in the post operative period which recovered over a period of 6 weeks. All the other patients had improvement in straight leg raise and other neurological parameters at followup. None of the patients had any significant bowel and bladder complains and gait changes, preoperatively as well on followup.

Theoretically discitis is seen less often in endoscopic surgery as all the instruments are used through a working insert and contact with skin is minimized. But one patient operated endoscopically developed deep seated infection. This patient was treated conservatively and finally had good result.

None of the patients in the study operated with microscopic technique had any other complications.

In terms of time taken to return to work, 15 patients (60%) of the patients undergoing endoscopic surgery, went back to work within 30 days of operation in comparison to those who underwent microscopic surgery where only 10 patients (40%) went back to work at less than 30 days. 80% got back to work within 45 days in both the groups. On statistical correlation, there is no significant difference in the average days required to go back to work. Only 1 patient who had discitis needed more than 2 months in endoscopic group. Two patients in microscopic group took more than two months to return to work. (Table 6) (Figure 2)

Comparing the time of surgeries in endoscopic

Depicting the total number of days of stay in the hospital

Depicting the time taken to return to work (in days) 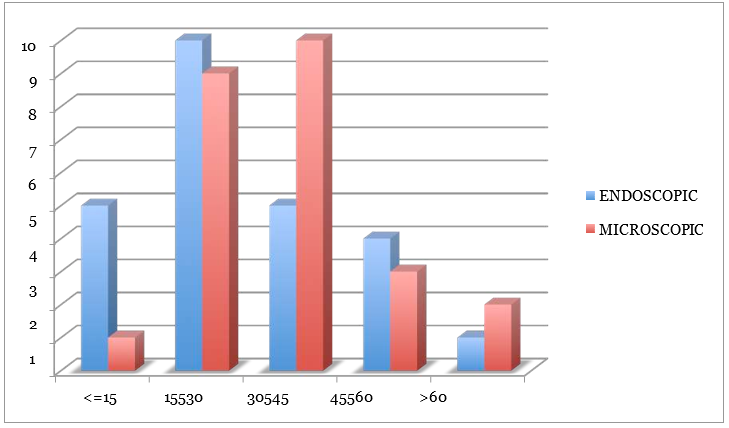 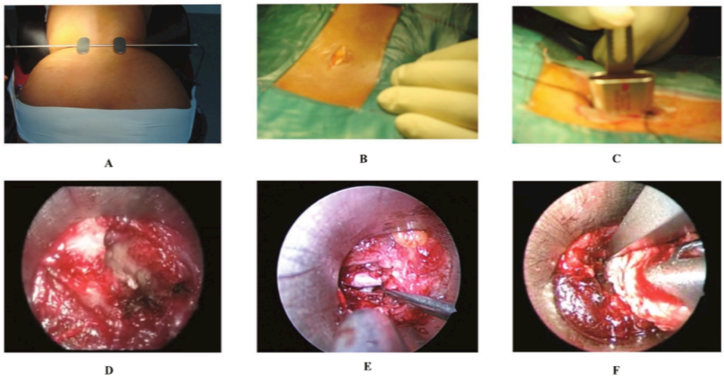 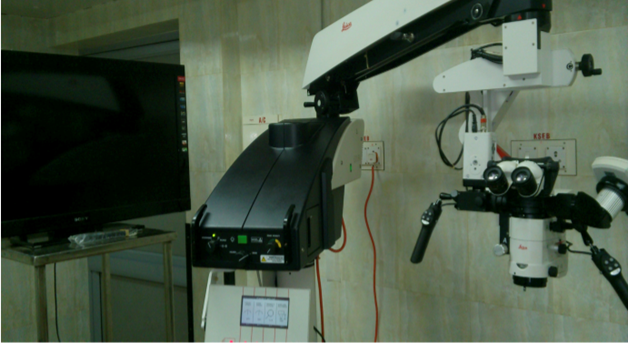 Conventional disc surgeries are generally associated with good results, when the cases are properly selected. Studies of endoscopic Transforaminal discectomies are associated with good clinical results.9 Similar results are reported for the endoscopic interlaminar operation.9 Microscopic discectomies achieve good results between 75% and 100%.10, 11, 12 In our study the clinical outcomes have been comparable to available literature. Visual analogue scoring (VAS) showed a significant decrease in pain pattern in both groups. But it was noted that the average decrease in VAS, was higher in Endoscopic discectomy group but not reaching a statistical significance. However, it is found that patient satisfaction was higher in cases where Endoscopic surgery was chosen, assessed using the McNab criteria. None of the patients had dural tear or any other significant intra op complications. This was noted to be interesting since many authors report dural tears as a potential problem with endoscopic discectomy which may need conversion to open procedure. No cases in both groups had recurrence. Techniques reducing the trauma to normal spinal structures reduce operation-induced adverse consequences like scarring, recurrence, residual back ache and iatrogenic instability. Postoperative pain and work disability were reduced in the Endoscopic group. The results of these parameters in a literature comparison also favour the endoscopy group. Minimization of the operation-related annular defect, which is attained in the Endoscopic technique, has been discussed as a protective biomechanical factor.

Parameters such as the osseous diameter of the interlaminar window and intervertebral foramen or the extent of sequestering of the disc material are no longer contraindications and the management of majority of disc herniations is technically possible. However, in cases where the interlaminar window is very small or the disc is grossly migrated, we found it technically difficult to operate with endoscope. We prefer microdiscectomy for far lateral discs. For levels proximal to L4/5 it is technically very challenging and so we prefer microscopic surgery at these levels. Regression of radicular pain was noted in all patients.

The advantages we found from our study of endoscopic over microscopic is excellent visualization, reduced trauma to soft tissues, reduced intra-operative blood loss, cost effectiveness due to shorter operating time, earlier rehabilitation and cosmetic scar of surgery. The equipment can be re-sterilised and hence is cost effective.

The factors which can be considered as a disadvantage were: Steeper learning curve, far lateral discs being more difficult to remove technically, and difficulty to perform proximal lumbar discectomies due to smaller interlaminar windows.

The drawbacks and pitfalls we noted in our study is that the sample size is small which can be overcome by continuing the study and adding more cases. The results also vary according to the patients and their postoperative long-term compliance, as the pathologic process of disc degeneration is a continuing process and patient has to understand the need for regular exercises and life-style modifications.

The obvious conclusions drawn from this study are that endoscopic surgeries offer better visualization and lesser tissue trauma with better Immediate postoperative patient comfort. On comparison with microscopic surgery, patients had comparatively lesser immediate postoperative pain. Patients had slightly better satisfaction with endoscopic methods and were able to return to work comparatively earlier than the microscopic group.

Both the techniques are effective and safe for lumbar discectomies, but when it comes to patient satisfaction and return to work, endoscopic method has a slight advantage whereas in levels above L4/L5 and far lateral discs, microscopic technique is our choice.

This research did not receive any specific grant funding agencies in the public, commercial or not-for-profit sectors.

None of the authors have any conflict of interest to declare.