Background: Most of the lumbosacral radiculopathies are caused by irritation of spinal nerve roots associated with lower back and leg pain. Most common causes for spinal root irritation are intervertebral disc herniation and spinal canal stenosis, other causes include spondylolisthesis, spondylosis, thickening of ligamentum flavum, scoliosis etc. Lumbar radiculopathy frequently treated by epidural corticosteroid injections. Common route for administering epidural steroid injections are interlaminar, transforaminal and caudal. But there are concerns due to rare major neurologic complications after this treatment. Therefore this literature focuses on caudal route of epidural steroid injections.

Objective: To know the benefits of caudal epidural steroid injection in lumbar radiculopathy and low backache by analyzing clinical and functional outcome.

Results: Out of 35 patients, in 28 patients (80%) low backache and radiating pain subsided after 3 days. But 7 patients (20%) get partial relief or having persistent complaints after 3 days, administered 2nd epidural steroid injection after a month. After one month 32 patients (91%) do not complain of pain but 3 patients (9%) tend to have some back pain which eventually improved on two to three months of regular physiotherapy and postural correction exercises.

Conclusion: Caudal epidural steroid injections are safe, quick and effective. It can be performed on OPD basis, has considerably fewer side effects than surgery. Therefore injections can help to increase function while avoiding surgery and long term use of analgesics.

Epidural steroid injections have been used as modality of treatment in pain due to lumbar disc injuries since 1950s.1, 2, 3 Most commonly pain is due to compression of nerve root by herniated intervertebral disc, which causes nerve root irritation. This irritation causes neuropathic pain along sensory distribution of nerve root of one or more spinal roots. Other causes of spinal nerve root compression are spondylosis, spondylolisthesis and ligamentum flavum hypertrophy. More than half the patients with lumbosacral radiculopathies have their daily life affected and they continues to have pain despite of oral medications.4, 5, 6, 7

Approaches for epidural injections are through transforaminal, interlaminar and caudal route. In caudal route, needle is inserted through sacral hiatus. Sacral hiatus is formed by non-fusion of fifth or rarely fourth sacral vertebra. (Figure 1) It can be palpable at the end of natal cleft in the midline. Anterior border of sacral hiatus is sacral canal containing extradural fat, lower nerve roots, filum terminale and venous plexuses. Bilaterally there are articular processes called sacral cornuas. Posteriorly there is sacrococcygeal ligament, subcutaneous fat and skin covering hiatus. 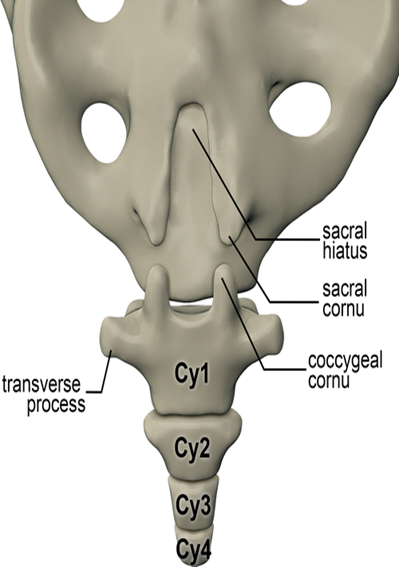 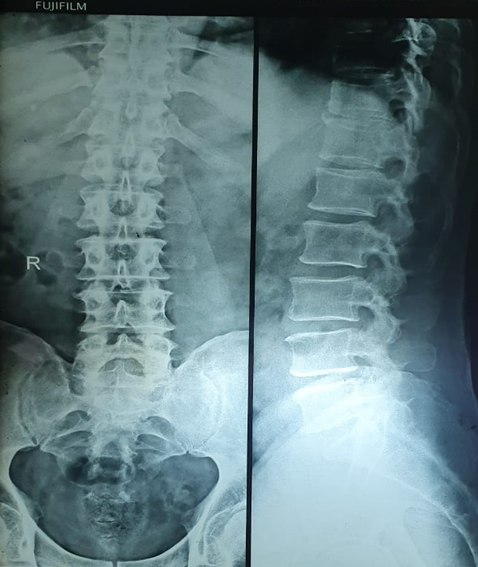 Caudal epidural route has complications such as local infection, neurovascular injury and hematoma.

We did cross sectional retrospective case study on 35 patients at tertiary care centre between September 2018 and December 2020 with low back pain associated with radiculopathy. Includes both male and female patients as per following criteria to participate in and make progress with a comprehensive physical therapy and rehabilitation.

We took sample size of 35 according to formula 4pq/d2

Written informed consent taken from patient for procedure and publication. Procedure is done under all aseptic precautions.

Distribution according to age

Out of 35 patients selected for study, we made 3 groups according to age.

Distribution according to gender

The patient asked to follow up in OPD on 3rd day, first month, third month and six months compulsory and maximum up to 3 years and assess for low back pain, radiculopathy, straight leg raise test and sciatic point tenderness.

Out of 35 patients, 28 patients (80%) do not complain of having low backache and radiating pain on one or both lower limbs after 3 days.

After one month 32 patients (91%) do not complain of pain but 3 patients (9%) tend to have some back pain which eventually improved on two to three months of regular physiotherapy and postural correction exercises.

Approaches for steroid injection are transforaminal route, interlaminar route, caudal route, here we are using caudal route. The caudal epidural block was first introduced as a landmark-based, blind technique. In children, the successful rate with the blind technique is above 96%.8, 9 In adults, however, it was only 68–75% even in the experienced hands.10, 11, 12 With the advent of imaging technology, fluoroscopy and ultrasonography have been increasingly used to guide caudal epidural block. In our study we have got epidural canal in every patient and our result is 100%.

The caudal epidural block involves placing a needle through the sacral hiatus to deliver medications into the epidural space. This approach to the epidural space is not only widely used for surgical anaesthesia and analgesia in paediatric patients but also popular in managing a wide variety of chronic pain conditions in adults. Choice depends on experience and skill. 70 to 90 percent patients experience pain relief lasting for years together. If good response is seen and when effect of 1st injection tapers off, 3 injections may be given within 12 months.

In our study patient asked to lie down prone and exposed from lower 2/3rd back to upper 3rd thigh well exposing the gluteal area. 4 inch pillow escaped below the groin.

Cleaning painting and draping done under all aseptic precautions, sacral cornuae and apex of sacral hiatus are marked with sterile marker pen.

Just distal to the apex of sacral hiatus needle of size 18/20 gouge with syringe containing 10ml cocktail is introduced at an angle of 45 degree, and when it touches the bone is felt then angle is change to 30 degree then needle is introduced further for a cm, then aspiration is done to check whether any presence of blood in solution then the cocktail is injected slowly in canal if it goes without any resistance it confirms we are in canal. (Figure 3, Figure 4, Figure 5, Figure 6) Patient is asked while injecting that is he feeling that solution is has touched the back and lower limb, if yes then ok or other cocktail of 10 ml is introduced again. 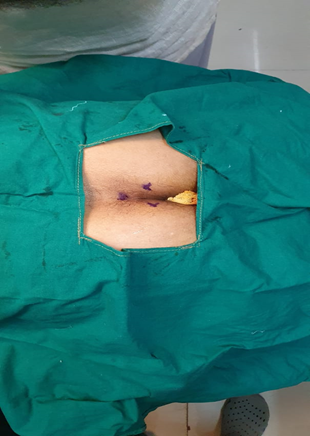 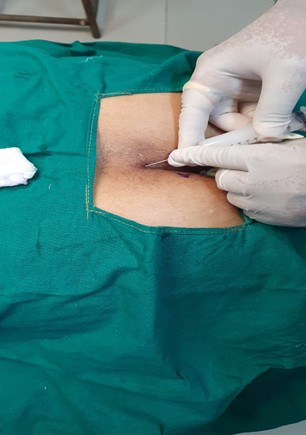 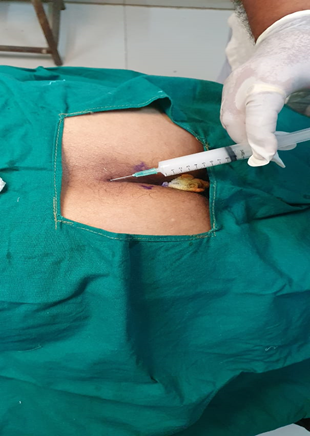 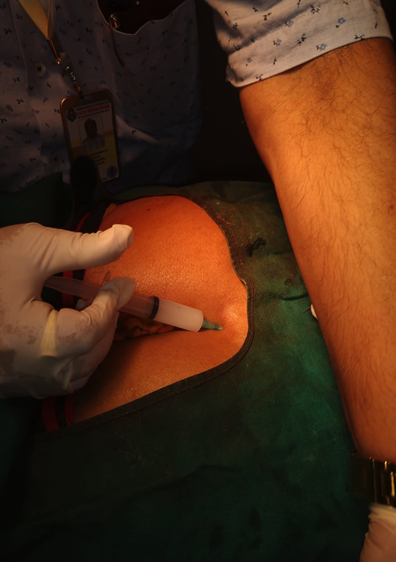 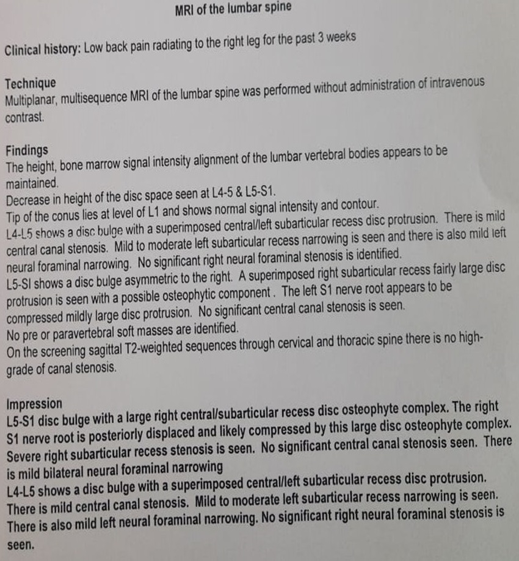 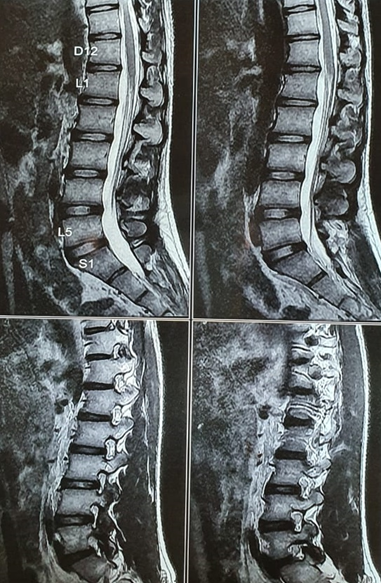 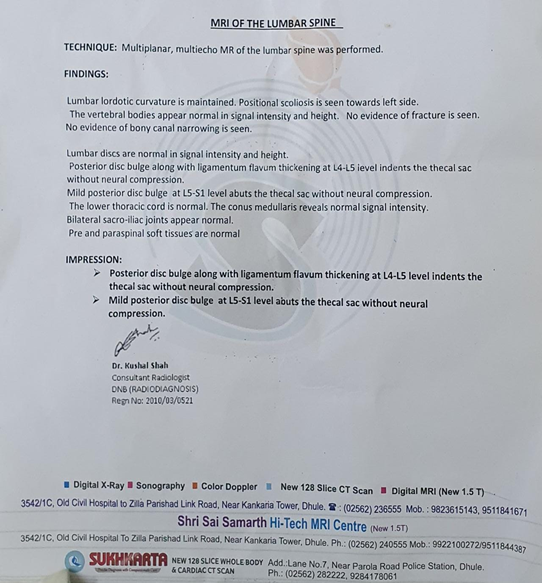 We have not encountered any complications such as local infection, neurovascular injury and hematoma in any of the patients.

Epidural injection given by other routes has more complications though the medication is going directly to the site of disease.

Caudal epidural steroid injections are safe, quick and effective modality of pain management for low backache with radiating pain in one or both lower limbs. This can performed on OPD basis, has considerably fewer side effects than surgery therefore injections can help to increase function while avoiding surgery and long term use of analgesics. By decreasing pain, caudal epidural steroid injections make it possible to take part in other treatments, such as physical therapy. Patient can go to work very early without losing his work days and pay.

G Barham A Hilton Caudal epidurals: the accuracy of blind needle placement and the value of a confirmatory epidurogramEur Spine J2010199147983