Subtalar joint dislocations are very uncommon and occur following high energy injury, usually following motor vehicular accidents. They account for around 1-2% of dislocations. We present to you, a few cases of subtalar joint dislocation managed initially by closed reduction, followed by open reduction under anesthesia, with excellent functional outcome. Close to fifty percent of patients suffering from complicated injury, are frequently at risk of developing complications. Avascular necrosis of the talus is the most common complication, following dislocation. Other long-term sequelae include osteochondral fracture and subtalar joint instability. This study is presented because of its rarity in clinical practice.

In this infrequent type of dislocation, the talus maintains its normal anatomical relation with the ankle mortise, while the calcaneus and navicular bones are dislocated under it. The sporadic type of dislocation is attributed to high energy trauma.1, 2

“The etiology of subtalar dislocation was found to be 43.7% due to motor vehicular accidents. 32.9% was attributed to fall from height. Sports injury accounted for 13.9% cases and rest 9.5% due to miscellaneous causes. It also concluded that males were more commonly affected than females.”3, 4, 5, 6, 7

In this case report, we would like to present few cases of subtalar joint dislocation and their management that we encountered, in our clinical practice. 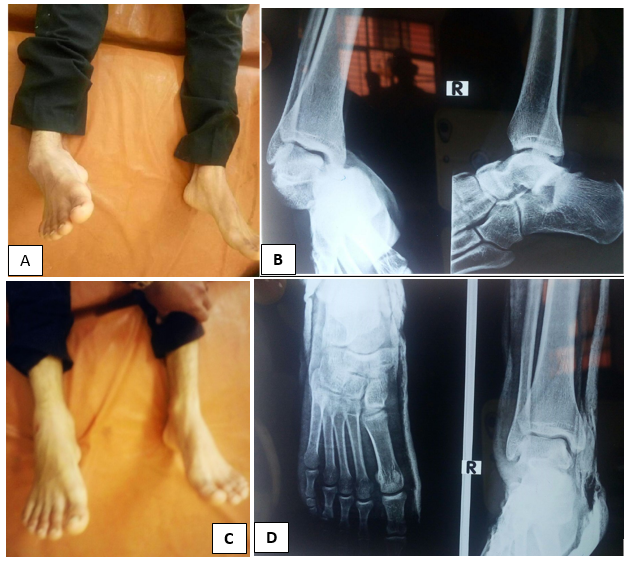 On the 29th November 2020 a 50-year-old male, presented to the Emergency Department of Goa Medical College, following a Motor Vehicle Accident. Initial examination of the patient revealed a haemodynanically stable patient with supinated right fore-foot. During secondary survey, an abrasion was noted just behind the medial malleolus (Figure 2). Radiographs (Figure 3 A and B) revealed subtalar dislocation and this was further confirmed by CT scan. (Figure 4) Initially, reduction was attempted under sedation in casualty which failed. 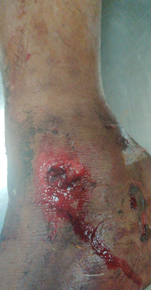 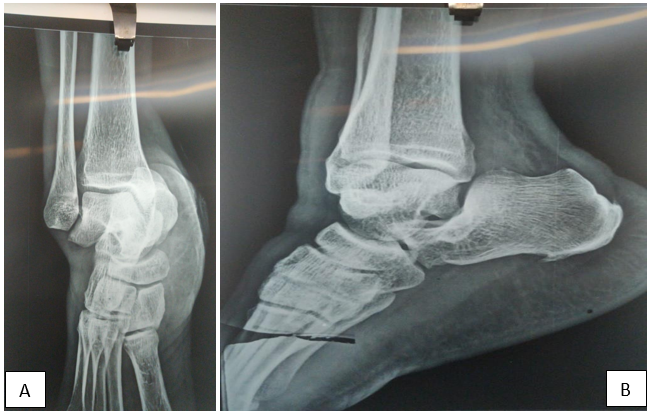 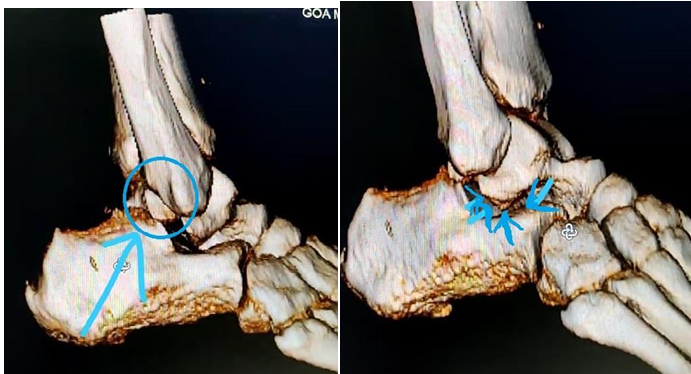 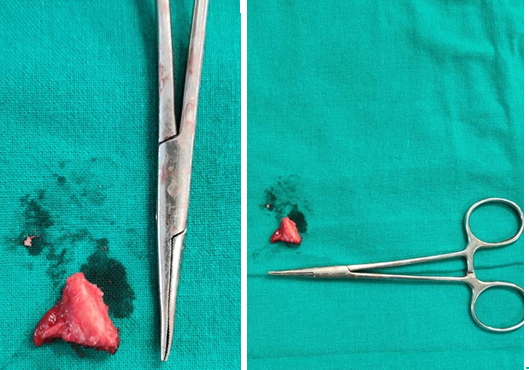 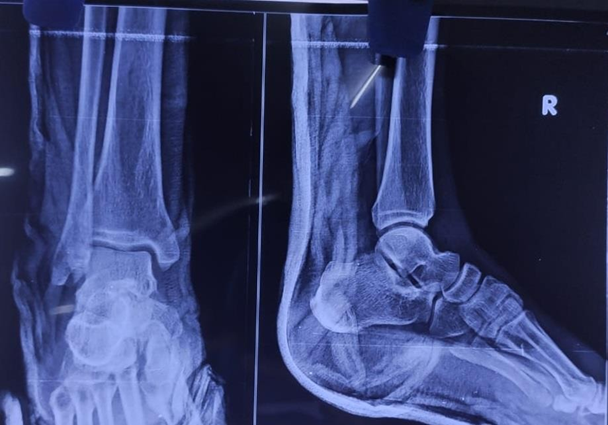 Patient was then placed in below knee slab and non weight bearing for 3 weeks. Stitch removal was done after 2 weeks. Follow up check x-ray showed congruent alignment of subtalar joint. There was no fracture involved of surrounding tarsal bones. Full weight bearing was resumed after 6 weeks and full range of motion of ankle joint was achieved.

A 35-year old patient came to casualty with injury to left ankle following motor vehicle accident. Examination revealed an open subtalar dislocation with exposed talus. Following lavage and debridement, reduction was attempted which was unstable. Patient was then operated under spinal anesthesia. K wire fixation was done under c-arm guidance. 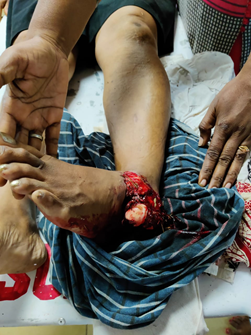 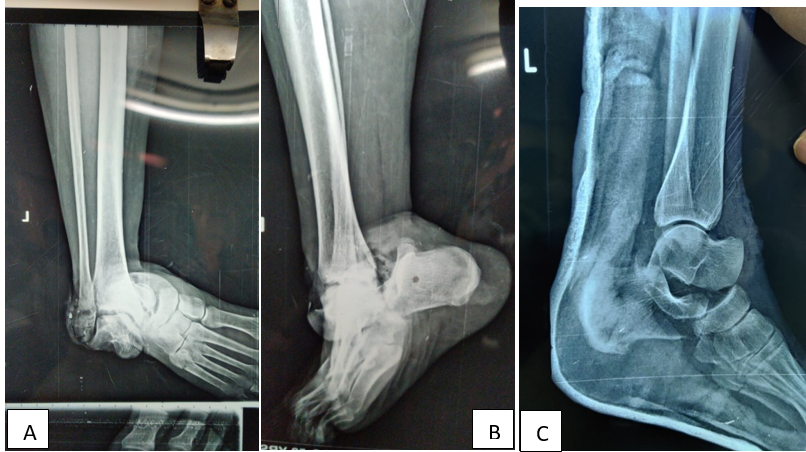 Subtalar joint dislocation is an infrequent type of dislocation and this is credited to the presence of tough ligaments surrounding the talus, the strong joint capsule which maintains the anatomical relationship between the talus and the calcaneum.2, 8 Hence, they represent approximately 1% of all traumatic dislocations.9

Subtalar dislocations are classified based on the position of dislocated foot, along with the relation between calcaneus and talus. It was first introduced by in the year 1853 by Broca and later modified by Malgaigne et al in 1856.10

Forced inversion, with the hind foot in equinus leads to medial dislocations. They usually occurs following low-energy trauma where, the sustentaculum talus acts as the pivot. The overall prognosis is usually good with less incidence of avascular necrosis of talus. Exclusive ligamentous dislocation has excellent functional outcome and prognosis after proper reduction.12, 13

In contrast, forced eversion of foot, with high energy trauma leads to lateral peritalar dislocation. The overall prognosis is generally poor, as they are commonly associated with fractures of surrounding bones and more frequent incidence of avascular necrosis of talus. Hence, it is imperative to diagnose associated fractures of lateral process of talus and sustentaculum tali, which leads to osteoarthritis of subtalar joint.14

There is no consensus on the duration of immobilization after reduction. Early weight bearing protocol is advocated, in uncomplicated cases, after a below knee cast for a period of 3-4 weeks. In complicated cases with instability, the use of an external fixator is advisable; hence delaying ambulation for a period of up to 6-12 weeks, depending on the extent of additional fractures of the tarsal and metatarsal bones.15

Uncomplicated, low-energy subtalar dislocations that are stable after closed reduction can be mobilized early and usually have excellent prognosis. Increasing severity of trauma, with associated fractures usually have poor outcomes. The most common complication following subtalar joint dislocation is post-traumatic arthritis involving the subtalar joint, reported rates being 25-89%. Osteonecrosis of talus is second most common complication.16

K Black KJ Ehlert A stress fracture of lateral process of talus in a runner. A case reportJ Bone Joint Surg Am19947634413