Kumar, Gupta, and Khan: Scapular Caffey’s disease: A masquerading swelling in an infant, a case report and review of literature

Scapular Caffey’s disease: A masquerading swelling in an infant, a case report and review of literature

Caffey’s disease was characterized by a triad of symptoms, irritability, soft tissue swelling, and underlying cortical bone thickening. It mostly occurs before the first 5 months of life in infancy. The knowledge of this pathology was essential as it masquerades as wide range diseases including acute osteomyelitis, bone tumors, trauma, battered baby syndrome (child abuse), hypervitaminosis a, scurvy, infantile malignant osteopetrosis, neonatal tuberculosis, congenital syphilis, pseudoparalyis of infancy which was more common and require specific management including extensive surgery. Classically, infantile cortical hyperostosis disease occurs in the early part of the first year of life. Infantile cortical hyperostosis was characterized by a clinical triad (fever, soft-tissue swelling, hyperirritability) and a clinching radiographic picture of underlying cortical hyperostosis (thickening or bony expansion). We reported a case of scapular swelling in a 2 -month-old infant where a retrospective diagnosis of caffey’s disease was made. We proposed a high clinical suspicion for early diagnosis of Caffey’s disease and hence appropriate management.

Caffey’s disease or infantile cortical hyperostosis (ich) was a rare self-limiting disorder of young infants. Caffey disease has been estimated to occur in approximately 3 per 1,000 infants worldwide. The incidence was fluctuating and may been influenced by environmental effects. There was no predilection for gender or race. The disease onset was mostly before the age of 5 months, and no case was reported above 2 yrs. The etiology was still unknown but had been associated with several conditions liked infections, immunological conditions, and genetic abnormalities. It had also been associated with typed 1 collagenopathies. It was characterized by a massive subperiosteal reaction with inflammation of the contiguous fascia and muscle with affiliation towards flat bones, most commonly being mandible, followed by diaphysis of long bones.We report our case to put forward more light on the regional, clinical, biochemical, and radiological aspects of caffey’s disease.

Two -month-old baby with uneventful antenatal and neonatal period presented with decreased movement of left upper limb for past 3 days with low grade fever, irritability and inconsolable cry. There was a gradually progressive swelling over the left scapular region (Figure 1) for 15 days. There was no history of intramuscular injection or trauma, lethargy or seizures.neurological examination revealed paucity of movement of left upper limb. Deep tendon reflexes were preserved. It was associated with restricted left shoulder movement. On detailed general examination, the swelling was 10x12 cm in size, ill defined, and firm in consistency. The local temperature was comparable to the surroundings. The swelling was tender, and the skin over the swelling was mobile, there was no dilated veins, no discharging sinus. Blood investigations revealed a marked increase in platelet count (973×109/L), ESR (40 mm/hr) and CRP (16.3mg/L).

Leucocytes was in normal range (16. 6×109/l) as per age, hb was on lowered side (8. 0 g/l). Blood culture report was sterile. The radiograph showed a perisoteal reaction all along the scapular border (Figure 2). On CT, there was evidence of a hyperdense envelope around the left scapula with ossification along the periphery, findings suggestive of an ossified subperisoteal hematoma with extensive muscle edema. Scapula was of normal density, no lytic or sclerotic lesions was seen on ct.MRI was suggestive of osteomyelitis of the scapula with significant soft tissue involvement; a differential of the neoplastic lesions was also given (Figure 3). Though MRI was reported as osteomyelitis of scapula, the absence of uderlyig risk factors for bone infection made us support an alternative diagnosis. The presence of irritability, soft tissue swelling and hyperostosis on Xray nearly helped us clinch the diagnosis. The baby was admitted for supportive management and true cut biopsy under general anesthesia to establish the diagnosis and further management. The histopathology slide revealed reactive woven bone with features suggestive of myositis ossificans and ossifying hematoma. No features suggestive of malignancy was found. The baby improved symptomatically on antibiotic therapy during in-patient stayed. The swelling reduced considerably over the next few days. The patient was discharged in stable condition on syp, cefixime(2.5ml/day), and ibuprofen(2.0-3.0 ml three times a day). No recurrence of symptoms was reported in 5 months follow-up. The retrospective diagnosis of Caffey’s disease was made based on cumulative findings 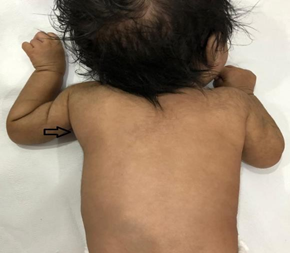 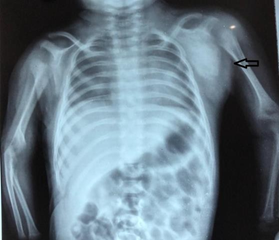 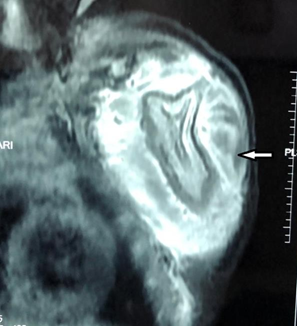 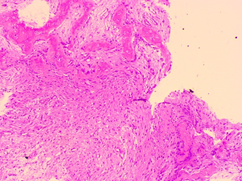 Caffey’s disease (Caffey’s disease) or infantile cortical hyperostosis (ich) was first described as a separate entity by caffey and silvermann in 1945.1 Still earlier, in 1930 roske reported similar cases of hyperostosis. It was a rare self-limiting condition affecting young infants characterized by inflammation of the periosteum with contiguous fascia and muscles with excessive subperiosteal new bone formation. While several factors liked viral infection, genetic abnormalities, immunological defects had been linked to its etiology but the exact pathogenesis was still unknown,2, 3 few studied had also clubbed it with collagen related disorders owing to discovery of a gene locus (gene col1a1, 17q21) which encodes alfa-1 chain of typed i collagen. Cortical hyperostosis had also been reported in patients with cyanotic heart disease treated with prostaglandin e1 for maintaining ductal patency.4, 5, 6. Three different patterns of Caffey’s disease had been described in literature namely sporadic form, familial form and prenatal form.7 There was decline in reporting of sporadic cases. The familial form usually presents early and may been at birth in 24% cases. The prenatal was the most severe form; it may been associated with polyhydraminos, lung disease and prematurity,7 deaths had also been reported in severe prenatal form. Diagnosis of prenatal form should been suspected in infants with short, angulated long bones with irregular and echodense diaphysis without fracture. Antenatal ultrasonographic images in prenatal form of Caffey’s disease resemble that of osteogenesis imperfecta.8, 9, 10 Caffey and Silverman in their original description described the mild sporadic form of disease. The usual age of presentation was 9 weeks with all cases resent by 5 months of age. We found few case reports in literature where the infant presented at 8 months of life. Mandible was the most common bone involved being present in 75%-80% cases. Next in frequency of involvement were the ulna and tibia followed by clavicle, scapula, and ribs. Still rarer involvement of the skull, illium, and metatarsals had been reported in literature. Multifocal involvement was also common.

Caffey’s disease mostly presents with a triad of irritability, swelling, and bony lesions. The swelling was usually firm and tender but devoid of any local signs of inflammation and skin involvement.11, 12 The mandibular cases may present with dysphagia, proptosis, and failure to thrive. Isolated case reports of facial nerve palsy and erb’s palsy had also been reported.13, 14 In some cases the child refuses to use the limb due to pain and may present with pseudoparalyis.

The laboratory findings were non-specific showing a generalized picture of inflammation. There was elevation of ESR, serum Alk PO4, immunoglobulin levels with thrombocytosis and anemia.15, 16 The radiographs showed a characteristic periosteal reaction with soft tissue involvement beneath the region of swelling. In long tubular bone, there was only diaphyseal involvement with sparing of the epiphysis. With time, the new bone under the perisoteum increases in density and gradually the normal bone appearance was achieved. In some cases the medullary canal may remain expanded with thinning of cortex. MRI had no additional valued in diagnosis, however marked periosteal reaction and soft tissue involvement was discretely visualized. CT also shows hyperdense periosteal reaction with absence of any cortical breach. Biopsy was indicated if there was likely suspicion of malignancy. Ewings sarcoma and metastatic neuroblastoma were important differentials of Caffey’s disease. Caffey’s disease may also mimicked osteomyelitis, child abuse, congenital syphilis, and hypervitaminosis A. Caffey’s disease responds well to symptomatic management. Anti-inflammatory agents liked paracetamol and indomethacin had shown remarkable improvement of symptomatology. Steroids had been reserved for infants with extensive disease. Although the disease was self-limiting and complete recovery was expected in 6-9 months without any recurrence, however, few case reports had shown that bone lesions could recur suddenly and had an unpredictable clinical course remission and relapses.

This was a rare case report of a sporadic Caffey’s disease case involving a scapula in a 2-month girl child reported from northern India. The aimed of this studied was to highlight the regional presence of disease and the difficulty in achieving diagnosis.We proposed a high index of suspicion in evaluating a young infant with swelling. Although, no features or laboratory findings were characteristic to Caffey’s disease, a triad of irritability with low grade fever, swelling without any local signs, and hyperostosis with soft tissue involvement with radiograph in the low age bracket should helped in clinching the diagnosis. This also helps in avoiding undue clinical exercise and early treatment of patients.

There are no conflicts of interest.